Digital photographers like to say that correcting shooting defects with software is bad practice, the equivalent of compensating for a flawed negative in the darkroom. These programs make us beg to differ. 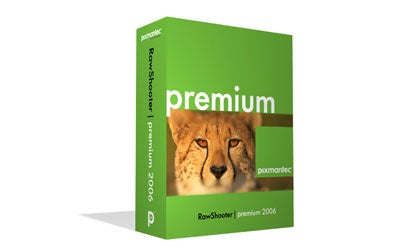 Digital photographers like to say that correcting shooting defects with software is bad practice, the equivalent of compensating for a flawed negative in the darkroom. These programs make us beg to differ.
Digital capture is no different from film in one respect: A higher ISO gives you a “grainier” picture. This noise-reduction program, available in both stand-alone and plug-in versions, lessens that grain and the color irregularities associated with it without sacrificing detail. In noisy pictures shot at ISO 3200 we were able to preserve detail and texture in hair and skin, and even freckles. The Noiseware interface is simple, letting you specify the degree of reduction you want in both luminance and color noise. You can also reduce noise by specific color or by shadow, highlight, or midtone values. If all that control is confusing, presets offer a good starting point. From $27 to $70, depending on version (at imagenomic.com).

|||| |—|—|—| | | | Pixmantec RawShooter Premium 2006
This is a powerful alternative to the often slow, clunky RAW conversion software that comes with digital SLRs. It starts with an import feature that quickly gets photos off your memory card, renaming them (if you like) and creating previews on the fly. This means you can begin working on images while others are still being downloaded to your computer. Once you’ve converted the files, RawShooter Premium offers streamlined image editing; it replaces Photoshop’s Hue/Saturation sliders, for example, with the Vibrance tool, which boosts or reduces saturation and contrast in a single slider. But what really sets this PC-only program apart is its emphasis on workflow. Shooters who can’t resist filling their 8GB memory cards in a single day will appreciate everything from its batch-processing flexibility to the way it lets you save almost anything you do as a custom setting. About $100 (at pixmantec.com).

(* Update: Since publication, Pixmantec was acquired by Adobe.)

Making selections is one of the necessary evils of Photoshop. In order to adjust specific areas of an image, you first have to define those areas for the program. If you want to work on an individual figure, for example, you’re in for a lot of work-and good luck if that person has hair. Few plug-ins solve this problem with the speed, accuracy, and automated ease of Fluid Mask 2.0. It divides your picture into like-color segments that resemble puzzle pieces. You simply choose the segments you want to include in your selection. Some manual adjustment may be required for detail such as hair, but video tutorials on the Vertus Website (www.vertustech.com) make such fine-tuning easy to learn. About $200, by download.

|||| |—|—|—| | | | Interpolation-the process of adding pixels to an image so you can view or print it bigger-should be handled with care. Using Photoshop’s Image Size dialog and its default bicubic resampling sometimes works fine, but quality can suffer if you try to go too big. The latest version of Genuine Fractals’ popular plug-in, which is accessed through Photoshop CS, CS2, or Elements 3 and 4, is simple: Open it, input the new image size you want, check the preview, crop if you like, and hit OK. We got better results from the software than we did with the same amount of upsizing in Photoshop. And because Genuine Fractals is a plug-in, you can create a Photoshop Action to enlarge in batches. About $160.

|||| |—|—|—| | | | Named for its creator’s cat, this RAW conversion software has serious geek credentials-enhanced by the fact that it’s even available for the Linux operating system, and that it was the first program to give access to Nikon’s encrypted White Balance information. (Not backed by a major company, it’s available only through download, at bibblelabs.com.) Frequently updated, Bibble now has just about every feature a RAW enthusiast could wish for, from super batch processing to a user-configurable interface. The latest version is integrated with Noise Ninja, a fine noise-reduction app, and Athentech’s Perfectly Clear, which expands the dynamic range of an image in a single click. About $130.

It offers lots of power for its price, but Jasc’s enduring image editor has always lacked the aesthetic appeal of its more expensive counterparts. This, its tenth generation and the first as a Corel product, has a newfound elegance. The Paint Shop interface has been streamlined for easier navigation and editing, and it provides extensive context-sensitive help: When you click a tool, a sidebar on the left tells you what it does, how to use it, and what to do next. New users should appreciate the guidance, while experienced photographers can turn it off and get to work. About $130.

|||| |—|—|—| | | | Sharpening tools in general-purpose imaging programs don’t give you the power or precision of this excellent plug-in. Sharpener Pro’s latest version handles 16-bit files, essential for preserving the quality of a D-SLR’s RAW mode. And it allows you to selectively sharpen areas within an image using a range of tools and brushes-applying different sharpening settings to those separate areas, if you want. There’s also a new filter for images converted from RAW, which require more pre-sharpening than camera-sharpened JPEGs. The software works within Photoshop, as well as compatible imaging applications from Corel, Microsoft, and Ulead. You’ll probably only need the Inkjet edition, but it also comes in Complete, which for twice the price adds settings for photolab printers and halftone reproduction. About $170.

Who knew that the next best software innovation would come from a camera company? Nikon has teamed up with plug-in specialist Nik (the similar names are a coincidence) to create a program that not only gives you good organizational tools but, just as important, also lets you make sophisticated, nondestructive local image adjustments-in way less time than you usually have to spend. Capture NX does this by reducing or eliminating the need for painstaking selections. Instead, you place a “control point” in an area you want to work on; a few simple sliders pop out, and you use them to adjust the range and intensity of the effect. Only pixels like the one on which you placed your point are changed.
We had a mixed-light image with two different color casts, for example, and dropped a “neutral” control point in each area, using the sliders to make the needed adjustments. Capture NX then blended the results together seamlessly. All adjustments are recorded in something like a history palette, so you can go back and modify your steps without regard to their original order. And since the steps are just instructions, you don’t get bloated files. Capture NX incorporates RAW conversion for Nikon shooters, of course, but users of other D-SLR brands (or Adobe DNG) will have to convert RAW files to TIFF or JPEG before they can use the software. It could well be worth the trouble. About $150 ($90 upgrade), available late summer.

Aperture 1.0 was the first of its kind: a pro-grade photo app that seamlessly integrated Photoshop-style image adjustments with power tools for handling large image collections, both within a single, streamlined workspace. Equally revolutionary was its ability to handle RAW files from import to final output-no other software required. But the debut release had uneven output, missing functions, voracious hardware demands, and a steep price. Aperture 1.1 is a substantial upgrade, offering much better RAW quality and significantly faster operation, particularly on Intel-based Macs. New features include a digital color meter, more RAW adjustments, better noise reduction and sharpening, and improved support for Photoshop layers. But the best thing about it may be the $200 reduction in its original $500 cost. (Version 1.0 adopters get a $200 Apple Store coupon.) About $300.

This sophisticated software fixes problems endemic to digital shooting-in particular, the lens imperfections that higher sensor resolution can reveal. It addresses not just noise and other digital artifacts but also vignetting, optical distortion, and chromatic aberration. The program now comes in several editions, including Optics Pro Standard (for entry-level and “prosumer” D-SLRs) and Optics Pro Elite (for high-end D-SLRs). Once you get the version you need, you can download all the specific lens modules you want at no further charge. A Starter edition offers support for EVF cameras with noninterchangeable lenses. Useful improvements in version 3.5 include the ability to perform all fixes on RAW files and to crop an image after you do your distortion correction, better for perspective control. About $80 (Starter), $150 (Standard), and $300 (Elite).