Digital backs for medium-format SLRs offer advantages over 35mm-style digital SLRs. But are they worth the price? 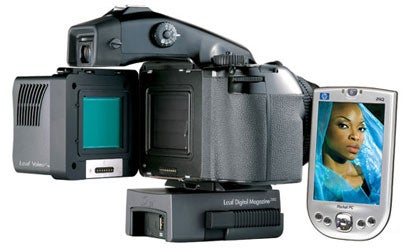 Auto aficionados have an old saying: There’s no substitute for cubic inches. It means, simply, that more horsepower is always better. In photography, the same idea can be applied to the size of the film or electronic sensor you use to capture images. Just as medium-format film delivers sharper, smoother pictures than 35mm, interchangeable digital backs designed to work with medium-format film cameras produce higher-quality output than do digital SLRs with chips that are 35mm-sized or smaller, all else being equal. But there are other important considerations besides sheer image quality, and you as a photographer need to decide if digital backs are worth the extra cost and effort. Here’s a look at the pros and cons.

The most obvious advantage of a medium-format digital back is the sheer proportions of its image sensor, but this goes beyond pure resolution. Most models have sensors that are roughly the size of a 6×4.5cm film frame, twice the area of a full-frame 35mm-size chip (such as in the Canon EOS-1Ds Mark II) and four times that of the APS-C-sized sensors found in the majority of 35mm-style D-SLRs. This allows not only for more pixels overall but also bigger individual pixels. And these translate not only into higher resolution (larger files) but also wider dynamic range (the ability to capture more detail in both highlights and shadows) and lower noise (digital “grain”).

While 35mm-style D-SLRs now top out at close to 17 megapixels, the latest one-shot medium-format digital backs have reached a staggering 39 megapixels. That native resolution covers a huge print size of 23×30 inches at 240 pixels per inch, and with proper technique permits enlargement to double that and beyond. Such big prints may not be needed, but even at moderate sizes photographs can benefit from the ultrafine detail produced by these backs.

And what about those bigger pixels? With their help, a medium-format digital back records 16 bits of tonal information per color, compared to a 35mm-style D-SLR’s 12 or 14 bits. The difference is much bigger than it sounds. Those 16 bits translate into 65,536 levels of brightness, as opposed to 4,096 levels for 12-bit color. This produces greater tonal and color smoothness in photographs, especially valuable when a file will undergo extensive manipulation in post-processing.The third advantage of digital backs is that, as with their film-using cousins, you can swap them out. Since the digital back is a separate unit, a photographer may freely upgrade to a newer or better model but still use it on the camera with which he or she is familiar. And it’s also possible to switch the digital back with one that takes 120 or 220 rollfilm, either as a backup or because you want to shoot film for specific requirements and effects.

A related advantage is that a medium-format digital back can be used on just about any view camera. (You attach it with an adapter plate.) This allows you to employ tilts, swings, and shifts for perspective and sharpness control, often vital in product and architectural photography and useful for special effects. This capability also gives you access to the world of large-format optics, which includes lenses designed specifically for use with digital backs.

There’s a downside to medium-format digital, of course. The medium-format camera bodies and lenses that you need to begin with are expensive, and digital backs are very costly — in the range of $10,000 to $33,000. For many working pros, though, this is simply the cost of doing business (mitigated by financing, leasing, and/or depreciation) and is more than justified by the cash flow generated by the equipment. Whether you’re a full-time pro, an advanced amateur, or a fine-art photographer, medium-format digital can eventually pay for itself by eliminating the costs of film, processing, and high-end drum scans — often thousands of dollars a year.

While the size of digital backs and medium-format camera systems is what allows them to accommodate a larger image sensor, that size is also their Achilles’ heel. The whole rig is usually much bigger and heavier than a 35mm-style D-SLR. What’s more, the lenses tend to be slower for any given angle of view, and you have fewer to choose from. Wide angles are less wide, telephotos aren’t as long, and there are few, if any, less expensive third-party lenses to be had, as there are with 35mm-style D-SLRs. Medium-format cameras also lack the sophisticated metering and AF systems (if they have autofocus at all) of current D-SLRs.

Medium-format digital backs are also a lot slower than D-SLRs in their framing rate, typically just one frame-per-second versus anywhere from three to more than eight frames-per-second in D-SLRs. (This is mainly due to the extra data they must handle.) And they’re a lot more power hungry than D-SLRs, limiting the number of frames per battery charge.

The real clincher that dissuades many photographers from digital backs is that, depending on the model, you may need to shoot with a storage drive tethered to the camera. This adds size, weight, and some degree of awkwardness, slowing down your shooting process. And a final consideration is that the image sensors in most digital backs do not have the anti-aliasing filters found in D-SLRs. These filters lessen moiré patterns in linear details, and are a virtual necessity with the small sensors in most D-SLR models. But they accomplish this by softening fine detail, and that would defeat the purpose of a digital back. Though less prevalent, moiré patterns do turn up in some medium-format digital images. This means you may need to spend more time retouching, depending on the subject matter.

As more and more professional photographers switch to digital SLRs, the number of medium-format camera makers has dwindled dramatically. Bronica and Contax have shuttered their businesses; Mamiya recently sold its camera operations to another company. Rollei’s 6008-series cameras are attractive but incompatible with most digital backs. For the moment, Hasselblad is the primary medium-format player in the U.S.

Luckily, independent companies such as Phase One, Leaf, Eyelike, and Imacon (itself now part of Hasselblad) make digital backs for almost all major medium-format bodies produced during the past decade — even discontinued models. Most of these cameras were developed before digital capture became a reality, yet even a 50-year-old Hasselblad can be fitted with a state-of-the-art digital back. (Just do careful compatibility research before buying.)

Last year, despite its corporate changes, Mamiya started shipping the Mamiya ZD, a 22-megapixel digital SLR with a nonremovable back and me