Formula for Success: More for less 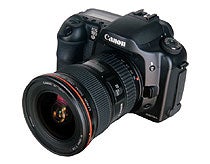 When it comes to digital SLRs, Canon deserves credit for breaking more price and performance barriers in the last three years than any other manufacturer. It all started with the introduction of the EOS D30 in 2001, the first 3MP DSLR priced under $3,000, and the very first to use a CMOS sensor. A year later, Canon launched the CMOS-based EOS D60, the first 6.3MP camera priced under $2,000. Soon afterward, we celebrated the arrival of the EOS-1Ds, the world’s first full frame, CMOS-based 11MP DSLR with a street price under $8,000. This year, Canon surprised us with its new EOS 10D, a $1,500 (street price) DSLR equipped with the same 6.3MP CMOS sensor as the EOS D60. (We were all secretly hoping for a more affordable version of the dream-machine EOS-1Ds). This left us wondering: Is the new EOS 10D merely a lower-priced version of the D60, or yet another digital SLR milestone?

Canon apparently wrestled with the shortcomings of the D60 and D30 in designing the new EOS 10D. (The D60 and the D30 shared the same stainless-steel chassis and polycarbonate body, a mediocre three-sensor autofocusing system, and relatively poor low-light performance.) For starters, the 10D chassis is also constructed of both polycarbonate and stainless steel, but with further protection added by rigid magnesium-alloy covers on the sides, top, and back. A larger rubberized surface on the right side also makes the camera easier to grip. The improved construction adds four ounces to the body, but we now feel that the EOS 10D has more of the look, feel, overall balance, and ruggedness of a pro SLR.

Several controls (such as meter mode and exposure compensation) have been moved closer to the shutter-release button and are easier to reach. While most of the buttons on the camera back are the same as those on the D60, the AF-select and partial metering buttons now serve a dual purpose in playback mode, allowing you to zoom in (up to 10X, versus 4X on the D60) and zoom out. The top LED panel is about the same size as the D60’s and provides much of the same information on exposure and camera controls.

Canon claims that the 10D’s focusing system has been greatly improved in terms of speed and low-light sensitivity. There are now seven selectable AF zones instead of just three, and they cover a wider horizontal and vertical focusing area. In addition, the EOS 10D has a higher-capacity burst rate of up to nine images at 3 fps in the highest resolution setting, using either JPEG or RAW formats. Other than the additional AF zones, the viewfinder is pretty much the same as the D60’s, but it now includes a flash-exposure-compensation indicator and a memory-buffer indicator. In single-shot mode, the latter usually reads nine images. But in continuous mode, it varies based on the number of images shot, updating continually as images are stored to memory. (More on the actual AF and shooting performance later.)

A cheaper EOS D60, or more significant?
According to Canon, the EOS 10D’s image quality has been improved in several areas, most notably color accuracy, lower signal-to-noise ratios at all ISO settings (from 100-3200), in low light, and for longer exposures. These advances are attributed to a refined sensor-manufacturing process and the integration of Canon’s highly acclaimed DIGIC Image Processor. Canon also boasts that it is now the only manufacturer that designs and builds all of the major components of its DSLRs, including the body, image sensor, image-processing circuitry, and optics. We can’t argue with them on that point. But how about the rest of the claims made for the EOS 10D?

As we mentioned earlier, the EOS 10D uses a similar CMOS imaging sensor as the D60, capturing a 6.3MP image (2048×3072 pixels) at a 2:3 aspect ratio. As a result of the smaller image sensor size (15.1×22.7mm) relative to a 35mm film frame (24x36mm), the effective focal length of a 35mm lens is magnified by 1.6X. This essentially curtails ultrawide coverage with EOS-mount Canon lenses. For example, the EF 16Ð35mm lens provided by Canon for our test delivers the equivalent field of view of a 26-56mm lens on a 35mm camera. Telephoto capability is increased in the same proportion, so a 100-300mm lens performs like a 160-480mm lens.

The EOS 10D borrows many of its exposure and metering controls directly from the older EOS D60, such as shutter- and aperture-priority, manual exposure, A-DEP (auto depth-of-field priority), and program AE. (For more on these, see the full EOS D60 test, Pop Photo). It also features similar custom functions. But now there are six program AE image modes instead of the five found on the D60, and the 10D has a built-in orientation sensor that rotates image files and automatically adjusts white balance, exposure, and focusing for vertical shots.

Like its older siblings, the EOS 10D accepts CF Type I or II cards, including MicroDrives, but now it can simultaneously store both RAW and JPEG versions of an image. In addition to exposure and flash-bracketing modes, it features a white balance (WB) bracketing mode. In this mode, the camera will automatically store the same image three times with warm, normal, or cool white-balance settings, so shooting a full burst of nine images produces 27 files on the memory card!

The EOS 10D has shutter speeds from 30-1/4000 sec, flash-sync speeds up to 1/200 sec with the built-in flash (or up to 1/4000 sec with the Canon Speedlite 550EX set to FE flash mode). Its pop-up flash has a bit more power than the D60’s, plus an AF-assist strobe light for shooting in the dark. The camera also offers a flash-exposure lock (FEL) that lets you preset flash exposure based on specific parts of a scene covered by the nine percent partial spot area. For studio shooting, the camera has a PC sync connector, which can be controlled directly from a computer via the USB connector and the supplied Canon RemoteCapture software. Other Canon software utilities include ZoomBrowser EX, PhotoStitch, and the File View Utility for converting RAW files to JPEG or TIFF; plus now Canon throws in a copy of Adobe Photoshop Elements 2.0 (a $99 value).

Does it test like a pro?
As we said, the Canon EOS 10D is built more like a pro camera than either the D60 or D30. But does it perform like one? On nearly every level, the answer is yes! The AF system has been substantially improved by offering seven selectable focus zones, as well as much faster speed and greater sensitivity. In bright light levels around EV 12, focusing speeds were about the same as the D60, averaging 0.4 seconds. At EV 7, the 10D was already twice as fast as the D60 (and close to the Nikon D1X), turning in times of 0.4 seconds, compared to 0.85 seconds with the D60. At moderate to low light levels, from EV 6 to EV 3, the 10D clocked in at 0.4 to 0.55 seconds, much faster than the D60’s AF speed of 0.9-1.85 seconds and actually a bit faster than the Canon EOS-1Ds and the Nikon D1X. At EV 2, the limit of the 10D’s AF sensitivity, the camera took 0.95 seconds to focus, compared to the D60’s 2.4 seconds. Not bad, but the EOS 1Ds, the Nikon D1X, the Sigma SD9, and the Fujifilm S2 Pro are all able to focus down to EV 1.

We didn’t find much difference in captured resolution between the EOS 10D and the EOS D60, but that’s really no surprise thanks to matching megapixel counts. On the other hand, most other image-quality parameters showed obvious advancement. Color accuracy tests of images captured in both sRGB and Adobe RGB (1998) produced surprisingly precise skin tones and realistic, saturated colors. (In fact, as we go to press, the EOS 10D holds the record for color accuracy in any camera, film or digital.)

Digital Grain?
When the camera is set to ISO 100-200, noise levels (which we’ve nicknamed digital grain) are very low, with very clean shadows and skin tones. Even at ISO 400, noise levels are lower than many digital cameras deliver at ISO 100, and at ISO 800, noise levels are still acceptable. No other DSLR we’ve tested holds up as well at ISO 800. At ISO 3200 (which requires setting a custom function), noise is unacceptable, but you still get a usable image.

Bursts get a boost
The camera’s burst mode also performs as claimed, capturing nine images in just three seconds (in RAW or JPEG mode). What Canon fails to mention is that it now only takes 15 seconds to write the entire nine images to a CF card (very fast!). If you keep the shutter button depressed after the burst, the camera continues to capture one image per second until the CF card is full.

In playback mode, you can now zoom in up to 10X, more than enough to see if eyelashes are in focus. You can also review capture information, histograms and overexposure warnings, crop and trim images, and tag your favorites for printing on DPOF, EXIF 2.2, or Canon Direct compatible printers. A new button has been added to the left side of the LCD that lets you quickly change scrolling directions when zoomed in on an image, and thereÕs a slide-show mode that cycles all images continually.

On the down side, the Canon EOS 10D’s 1.6X lens magnification factor might force you to shell out a few hundred dollars more to get a decent wide, angle field of view. And the partial spot area (tested at about 15 percent of image area) isn’t as useful as a real spot meter. Finally, at $1,500 street price, the EOS 10D is still high-priced for most photo enthusiasts. But if you can afford it, we think it’s currently the best digital SLR for the money.

How does the EOS 10D stack up against competitors?
Nikon D100 ($1,700, street)
This popular 6MP DSLR accepts Nikkor lenses (with a 1.5X magnifation factor). It also features 28 custom functions, sophisticated metering options (including a precise 1.1 percent spotmeter), a pop-up flash, and a bright AF-assist light. However, the D100 has a less rugged polycarbonate body and can only capture up to 6 high-res JPEG images at 3 fps. RAW bursts are slower, and RAW conversion software is optional. While image quality is extremely high, the D100 has slightly lower color accuracy and higher noise levels at ISO settings of 200 compared to the EOS 10D.

Sigma SD9 ($1,500, street)
Sigma’s first foray into the DSLR battle features the Foveon X3 sensor with slightly lower noise levels than the EOS 10D at ISO 100-400 settings. It also features a higher 1/6000-sec shutter speed and AF sensitivity down to EV 1. However, the SD9’s resolution is closer to a 5MP camera, it lacks a pop-up flash, and it has a narrower 1.7X magnification factor with compatible Sigma lenses. You are also limited to capturing RAW image files, which require a computer to process and slow down the burst rate. Finally, the SD9 doesn’t ship with rechargeable batteries.