This 10.2MP beauty is perfect for DSLR owners looking for a lightweight alternative with lots of control. 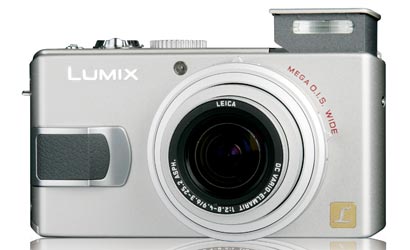 Panasonic could have impressed us just by fixing the faults we found in last year’s compact Lumix DMC-LX1. But with its new Lumix DMC-LX2 ($500, street), it delivers a whole lot more. A pocketable alternative to a digital SLR, the 10.2MP LX2 packs a gorgeous 2.8-inch LCD screen with a full 16:9 aspect ratio, loads of controls, improved burst rate, true high-definition video recording, a new image processor, and 16MB of built-in memory. It’s even available in black in addition to silver. Best of all: its performance on our Certified Lab Tests — and its “steal-me” price.

Like its 8.4MP predecessor, the LX2 boasts a 4X Leica DC Vario-Elmarit f/2.8-4.9 optical zoom lens, optical image stabilization, and a true 16:9 aspect ratio sensor that can quickly be switched to 3:2 or 4:3 formats. But the earlier version’s disappointing digital noise and image quality at ISO 200 and above, along with an LCD screen that didn’t show the entire 16:9 image, dampened our enthusiasm for it.

What a difference this upgrade makes! We ran the LX2 through the Pop Photo Lab, and the results show that Panasonic has made a breakthrough in image quality, thanks to its new Venus Engine III processor and smart noise-reduction technology.
Combined with the excellent resolution from the sensor (which beats most 8MP DSLRs at ISO 100 and 200) and its excellent color accuracy, the LX2 earned an Excellent rating for Image Quality at ISO 100, and Extremely High ratings from ISO 200 up to ISO 800. Its noise levels peak at ISO 200 (Moderately Low) and drop to Low at ISO 400 and ISO 800, rising back to Moderately Low at ISO 1600.
Obviously, noise reduction kicks in at ISO 400 and higher, with a trade-off in resolution — at ISO 800 the resolution is on par with a 6MP camera, and at ISO 1600, a 5MP. But you get to choose how much resolution to give up by setting NR at High, Standard, or Low. (Our tests were done at Standard.) Want more detail? Dial in less noise reduction. Don’t plan to make big prints? Give up some detail, but banish noise with more NR. Frankly, we were impressed by the results at the Standard NR level and can’t see a reason why you’d dial in higher NR — only lower to improve sharpness.
Also, to get the highest color accuracy, we had to turn the default saturation and contrast controls down to their lowest settings (it’s easy in the menus).
The flash is a bit weak and limited in range (just over 6 feet) at ISO 100, though it has an extended range at higher ISOs, as well as some useful features. These include a slow-sync mode for low-light shooting (which works well with image stabilization), quick access to flash EV compensation control, and fill-flash capability up to 1/2000 sec shutter speed.

Other gripes: Unusual JPEG compression artifacts at ISO 100 appeared in shadow areas and fine tonalities. They were visible at 100 percent magnification, even when the camera was set to Finest JPEG mode, but were barely there in RAW files converted to TIFF with the powerful Silky-Pix Developer Studio 2.0SE software (supplied). Also, the JPEGs saved in RAW + JPEG mode are highly compressed.

As with the LX1, changing the aspect ratio of your image is easy with a switch on the lens housing. The 16:9 format is ideal for viewing images later on a widescreen computer LCD or HDTV monitor, and it gives you a true 28mm field of view at the widest lens setting.

Built into this lens assembly is Panasonic’s MEGA Optical Image Stabilization (OIS) system, which lives up to its claim of 2 to 3 stops’ advantage in handholding. It’s easily set to either of two modes: Mode 1 lets you see the effect of stabilization in the LCD; Mode 2, which works better, activates the OIS system when you press the shutter. As there’s no optical viewfinder, we suggest keeping the IS system on in most lighting situations to reduce the inevitable shake from holding the camera with arms outstretched.

This is a compact for control freaks. Besides aperture- and shutter-priority modes, it offers full manual, with shutter speeds from 1/2000 to 60 sec and a very useful screen graph showing over- or underexposure. It can bracket exposures, too. Scene modes include Night Portrait, Starry Sky, Soft Skin, and even Food. And in autoexposure mode, there’s a backlight compensation feature that works even without the flash popped up.

Although the LX2’s higher resolution means larger image files, thanks to the Venus Engine III processor, its burst mode is up to five images at 3 frames per second (Fine mode); plus, it can now shoot continuously at 2 fps (depending on speed of SD card).

Its 9-zone AF system works slightly faster in bright light than the LX1’s. The AF performed decently for a compact camera in low light, and in the dark when the AF-assist light is activated. But it’s definitely faster on slow-moving or stationary subjects in low light when set to 3-zone mode.

You can set the lens to manual focus or macro (as close as 1.92 inches at the widest focal length). As with many other manual focusing systems on compact cameras, the central area of the scene is magnified on the LCD to assist you. But on the LX2, you can move that area around to focus on an off-center subject, or use the entire screen as a magnified window. Both features are great for shooting macro subjects and low-contrast scenes that fool the AF system.

You can show off videos and still images alike on the LX2’s 2.8-inch TFT LCD, with its high resolution of 210,000 pixels. The screen has luminance controls to boost brightness — good for shooting in strong light — and a mode that makes it easier to see the preview when holding the camera overhead. The display can be quickly changed to show data, live histogram, and composition lines. Playback controls allow you to view vertical shots either full screen or rotated, with or without histogram and exposure information.

In all, the Lumix DMC-LX2 is the kind of upgrade we like. It overcomes most of the weaknesses of the LX1, except for the limited flash range. And with its improved low-light noise reduction and image stabilization, you might not even care about the flash. What you’re sure to care about: this camera’s excellent image quality, delightful LCD, super Leica lens, and $500 street price.

Based on test results and graphs from DxO Analyzer 2.0 software, you can see that noise levels at low ISO 100 are significantly higher than you would find on most DSLRs, and signal to noise ratio is lower. That’s to be expected from a CCD sensor with so many pixels that are far smaller than those found in a DSLR. As a result, there is already some signal boosting going on to increase the base ISO to a tolerable ISO 100. From the ISO 100 through 200 graphs you can see that the red channel has significantly higher noise levels while green has the lowest, a contributing factor to the excellent resolution rating of this camera at ISO 100 (most detail is found in the green channel). RGB curves respond in a similar fashion across the grayscale until the blue channel shows slightly higher noise in highlight areas and red channel noise drops. Therefore, if you want to apply any kind of noise reduction in post processing to images taken in this ISO range, target the Red channel especially in the mid-tones and shadows.

At ISO 400 signal-to-noise ratio and standard deviation averages show some signs that noise reduction has kicked in, but this is very evident in the channel curves at ISO 400 and higher. Notice how the RGB curves are now grouped much closer together across the gray scale, a sign of very intelligent noise reduction. Signal to noise ratio remains acceptable all the way up to ISO 1600, and grain size and shape remains tolerable and symmetrical — albeit at the expense of resolution and sharpness.

Panasonic ships a very powerful RAW converter program with the LX2: SILKYPIX Developer Studio 2.0 SE. It only opens and converts images from the Lumix LX2 (unlike the full version available here for $139) but that should thrill owners of this camera. We found that images shot in RAW mode and converted to 16-bit TIFF files showed up to 15% higher resolution and improved image quality compared to JPEG files captured and stored in the camera. The SILKYPIX software also gives you an amazing amount of controls, including curve adjustment, chromatic and lens aberration correction, perspective adjustment, and noise reduction fine-tuning. 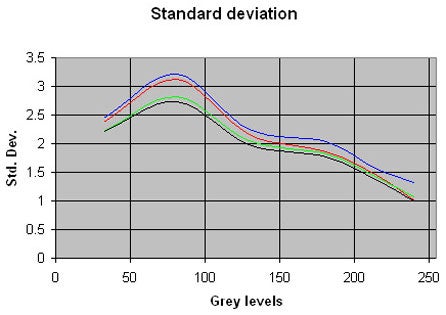 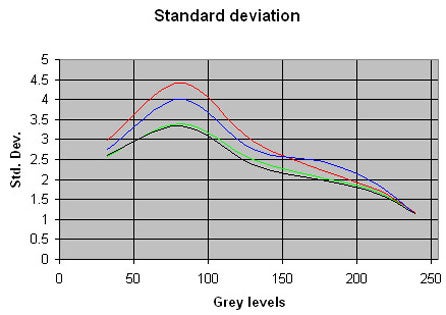 *Noise Results at ISO 1600*Signal to noise ratio remains acceptable all the way up to ISO 1600, and grain size and shape remains tolerable and symmetrical — albeit at the expense of resolution and sharpness.
Camera Reviews
Compact Cameras
cameras
gear
Panasonic
Tested Reviews