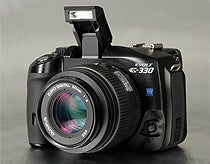 Olympus pulled it off, with its new 7.5MP (effective) Evolt E-330 DSLR ($1,000 street, body only). It’s the first DSLR to offer a live color preview in its LCD monitor. This, along with its excellent resolution, color accuracy, and overall image quality, make the Evolt E-330 a welcome successor to the earlier E-300. But are its live preview and other improvements worth the extra price you pay for the E-330?

Before we give you our opinion, let’s look at how Olympus was able to go where no DSLR had gone before. First, its engineers started with the same body as the Evolt E-300 (reviewed November 2004), the first DSLR with a side-swing optical porro-mirror system. Then it made some additions and modifications. The most critical addition: a 5MP CCD sensor that now sits along the optical path between the first mirror and the optical viewfinder. Similar to the small-sized 5MP Panasonic sensors in several Olympus compacts, it serves only to create a live preview.

A larger, 4/3 type 7.5MP NMOS sensor is used to capture the image. Olympus calls this a Live MOS sensor because it also has live video output. There are two live preview modes that utilize each sensor’s capabilities. The A Mode relies on the 5MP CCD sensor to deliver a fairly accurate live color image, at a smooth 30 fps, to the 2.5-inch, swiveling, color LCD on the back. This mode works even in relatively low light and matches the 94% image accuracy of the optical viewfinder. But the preview image is fairly grainy, and you can’t set it to brighten or darken the image based on exposure settings.

The B Mode delivers a live preview directly from the larger Live MOS sensor. As a result, you get an excellent (100%) image accuracy, much finer grain, and a better performance in low light compared with the A Mode preview. However, in this mode the mirror goes into lock-up position and blacks out the optical viewfinder, so you must focus manually. Fortunately, you can digitally zoom in at 10X to any part of the image and fine-tune focus, a powerful tool for macro shooters.

According to Olympus, the new Live MOS sensor shares many features with a typical CMOS sensor, such as lower power requirements and manufacturing costs compared to a CCD. Without using the live preview, the E-330 gets a CIPA battery rating of up to 400 shots, about the same as the E-300. However, using the live preview mode taxes the battery, and the CIPA rating drops to 250 shots in A mode, and down to 200 shots in B mode. You’d better plan to pick up an extra battery for this camera. The 2.5-inch Hyper Crystal LCD monitor on the E-330 puts the tiny 1.8-inch LCD on the original E-300 to shame. It delivers higher overall resolution (approximately 215,000 pixels), a much wider 160-degree viewing angle, and better color and contrast. It also has the ability to rotate up to 90 degrees (so you can use it as a waist-level finder) or tilt down around 45 degrees for composing overhead shots. The only downside of the large LCD is that it adds about 1/4 inch to the thickness of the body and presses against your cheekbone when you use the optical viewfinder.

In addition to the Zuiko Digital lenses and accessories available for the E-330, Olympus will also offer the PT-E02 underwater housing ($1,100, street). It’s designed to take advantage of the camera’s live preview capabilities and to let you compose shots without using the viewfinder (difficult to do with a diving mask on).

Otherwise, the E-330 shares similar arrangements for controls, as well as similar pop-up flash capabilities (up to 1/180-sec flash sync) with the E-300. From the top, the biggest difference between the two is the placement of the exposure compensation button behind the shutter. But the power switch and main control dial occupy the same position, with similar markings for exposure and scene modes.

On the back of the camera, the E-330 now has only four buttons to the left of the LCD (compared with five on the E-300). These include a four-way control button, and two new buttons above the LCD control the live view. There are also slots for two cards behind the door on the right: one for CF Type I and II, the other for xD-Picture Cards. Inside, nearly all exposure and metering choices are identical to those in the E-300. These include everything from white-balance bracketing to reversing the ring rotation direction for manual focus. And, like all other Olympus Evolt DSLRs, an ultrasonic dust removal system keeps its 4/3 format sensor clean.

Image processing is handled by the Evolt’s TruePic Turbo engine, but it doesn’t contribute much to the E-330’s mediocre burst capability (only up to four JPEG, RAW, or TIFF files at 3 fps).

The E-330’s optical viewfinder is just like the E-300’s, with three selectable AF zones and data display to the right of the image area. The TTL phase-difference detecting AF system is also similar, but we found it to be slightly more sensitive, with the ability to focus down to EV 0.

The Evolt E-330 delivers nearly the same Excellent resolution (1,705 lines average) as the E-300, despite a slightly lower pixel count (7.5MP effective, versus 8.2MP on the E-300). Color accuracy has improved dramatically to an Excellent rating (7.97 average Delta E).

Noise is also improved at higher ISOs; it doesn’t reach Moderately Low until ISO 400. After that, noise reduction kicks in, holding noise down to Moderately Low even at ISO 1600, with about a 10 percent loss in resolution. (We also noticed a slightly higher dynamic range in the highest-quality JPEG images compared with the E-300, but this is not as obvious when you shoot in RAW or TIFF modes.)

The bottom line on this Evolt? It’s a splendid improvement over the E-300 in terms of image quality and AF sensitivity. And for the few hundred dollars more than you’d spend on the older E-300 ($600, street) or the Canon EOS Digital Rebel XT ($750, street), you get the only DSLR capable of a live color preview — and a big, swiveling LCD monitor to enjoy it on.