Canon's new top of the line pocket rocket gets some major upgrades, including the return of RAW and a new RAW converter for the total control freaks. 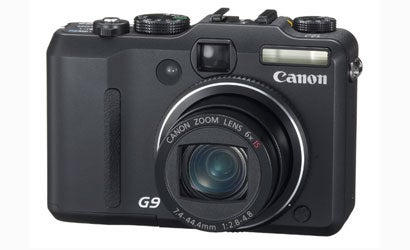 But inside, it’s a different story. The G9 marks the return of RAW to this line of cameras, a move that is sure to please the hardcore shooters, along with an interesting new “Adaptive Noise Control” function in the ZoomBrowser (PC)/ImageBrowser (Mac) RAW converter. Not only that, the G9 can brag about 2 million more pixels inside on its 1/1.7 chip. But it doesn’t blow the 10 megapixel G7 away in resolution. Instead, it appears the Canon PowerShot G9 uses all those extra pixels for noise smoothing, both in JPEG and RAW capture modes. We had no complaints with the resolution of the G7, which like the G9 uses the Digic III processor, but noise was another issue. The G9 goes a long way towards fixing those issues. It’s not perfect — high ISO shots can still be noisy, but not to the unacceptable extremes we saw with the G7. Add in the adaptive noise control for smoothing RAW data with marginal resolution loss and the G9 emerges as a much improved camera over the G7, though it does carry over a couple of the G7’s weak points:

• Barrel distortion is still a big problem at the 35mm wide angle setting.
• A burst rate only a slug could love — especially in RAW (although it does continue to chug along for a long time, and doesn’t buffer-lock).
• Confusing menu-driven options and multi-button/dial configurations that can drive both the Elph and EOS user nuts trying to figure out.
• Lens barrel intrusion into the optical viewfinder field at wide-angle.
• Only about 80% coverage with optical viewfinder.

For our Pop Photo Lab Tests, we captured images in RAW and Large, Superfine JPEG simultaneously. The CR2 files were converted in Canon ZoomBrowser’s (called ImageBrowser on Macs) RAW Utility twice: once with Adaptive Noise control set to 0 (none/RAW0), and again with Adaptive Noise control set to 10 (maximum/RAW10). We like what we see! Adaptive Noise, particularly at middle and high ISOs, does a great job in smoothing noise, with only marginal resolution loss (less that 1% at ISOs 80 and 800).

In the lab, at ISOs 80-800, the Canon PowerShot G9 posted very respectable resolution results for a 10 megapixel camera in both JPEG and RAW0 and RAW10 conversions. (Yes, we know, it packs 12 megapixels, but the resolution remains firmly in the midst of the 10 megapixel-class cameras. This is just fine by us, because we’d rather have cleaner images with less noise and slightly less resolution, than noisier-than-all-get out images almost any day of the week!)

We’ll tell you this straight-out: Shoot RAW plus JPEG whenever possible with the Canon PowerShot G9. Use Adaptive Noise control in Canon ZoomBrowser, and use it near the highest settings for RAW conversions. At ISO 80 through 200, the JPEG and RAW0 and RAW10 are similar, but at ISOs 400 and 800, the Adaptive Noise Control has a bigger impact.

Our advice, once again: Shoot RAW plus JPEG whenever possible with the Canon PowerShot G9 for the most control over image quality at capture and in post-processing, especially at middle and high ISOs. (Annoyingly, though, the Scene modes do not support RAW capture. The thinking must be that users that will use Scene modes wouldn’t be interested in RAW capture and post-processing. It’s an oversight that may be fixable with a firmware upgrade, but don’t hold your breath.)

Contrast appears slightly low in both RAW and JPEG. Shadow details, especially at High ISOs can show some chromatic noise, especially in JPEG and RAW with low Adaptive Noise settings. The LCD screen is easily viewable at the middle setting, even in bright daylight, although in bright daylight, trust the histogram instead of the LCD for shadow and highlight details, as these can be tough to read in direct sun. At the opposite end of the spectrum, it does appear slightly less noisy in low light than the lower-resolution LCD on the G7, which bordered on painfully noisy for framing a photo in your typically low-lit restaurant.

What’s not to love about a pocketable camera with a 6x Optically Image Stabilized lens, RAW+ JPEG capture with a cool new RAW converter, rock-solid build, full manual controls, spot, average or evaluative metering, advanced Face Detection technologies, EX-series x-sync hotshoe, time-lapse movie mode and more? Nothing fatal, but there are some eccentricities with this camera that have us scratching our heads.

• To begin with, we don’t understand why RAW only works in certain modes such as P, Av, Tv, and Manual, but not Auto or Scene Modes. And we don’t understand why RAW + JPEG only allows for Large capture. It would be nice to be able to pick a smaller-sized JPEG, like on the G9’s bigger EOS siblings. But overall, we’re very happy to see RAW back in the G9, even if it is implemented a little strangely.

• We love being able to use EX-series strobes with the G9, especially with an off-camera cord, but it is frustrating that you can only go with ratios in full manual mode. E-TTL and FE compensation work with Program, Tv and Av mode. But in Manual mode, it’s ratios. Again, not a fatal flaw, but it does make creative control a bit more challenging, since you can’t just dial back the strobe a stop or so. Instead, you’ve got to run the tables in your head (or just experiment and check the LCD and re-adjust).

• The PowerShot G9 has no usable internal memory. None. If you forget an SD card, you’re out of luck. While many cameras ship with a piddling amount of internal memory, and some other new ones are loading up on internal memory, there’s just none here. Not even enough for a single VGA cell-cam sized photo. In a nutshell: don’t forget your SD cards!

• “My Colors” image quality adjustments also don’t work with Scene Modes, so you can’t use Night Snapshot to make a monochrome shot of your sweetheart in some romantic far-flung location in one step. It’s possible to convert using the “My Colors” option in Playback, but where’s the instant gratification of pre-visualization on the preview screen and during quick review?

• We love the Panorama Assist mode on the Canon PowerShot G9, although some beginners might be confused or frustrated by it. See, unlike a lot of competitors, it doesn’t merge and downsample the pano-stitchers in-camera and output a low-resolution. It simply names and labels them differently, and then the full-resolution images can be merged in Canon’s Photostitch, for huge, high-quality panoramics that can be printed huge. You can’t merge the Pano-assist shots in-camera, so stop looking for this option! But do try this in Photostitch. The results are impressive, and the files are HUGE! Five shots merged together create a 100+ Megabyte merged image.

After the disappointing lab results of its predecessor, the Canon PowerShot G7, we were a bit skeptical of the Canon PowerShot G9. Not anymore! In general we like what we see. We like Adaptive Noise RAW conversion. We like a compact camera that syncs with external strobes. We like full manual controls. And we like Scene Assist modes to help beginners get better with their compositions before venturing into the uncharted waters of full manual control. We love the Focus Confirm and face recognition instant playback. We like the high-quality half-camera, half-computer Panoramic capture mode. Overall, we like this camera a lot. However, we’re not so impressed with ISO 1600 image quality, nor the mostly useless low-resolution ISO 3200 mode. 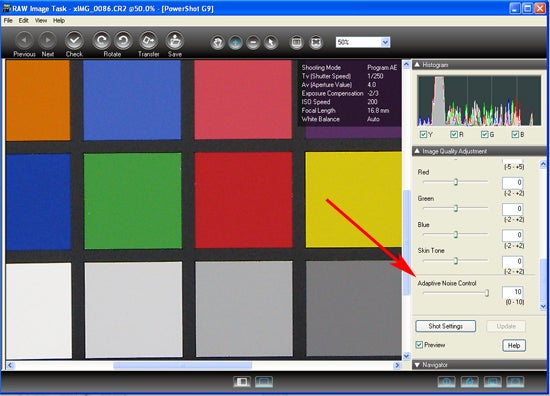 This little slider is powerful. In High ISO RAW images, it significantly reduces noise with negligible effects on resolution. 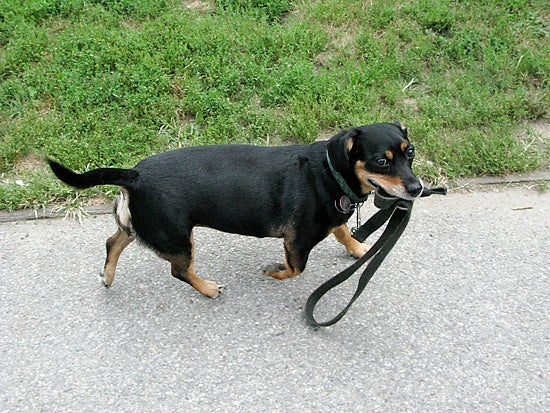 This dark little pup on faded asphalt was shot at ISO 400 and RAW processed with Adaptive Noise at 7. 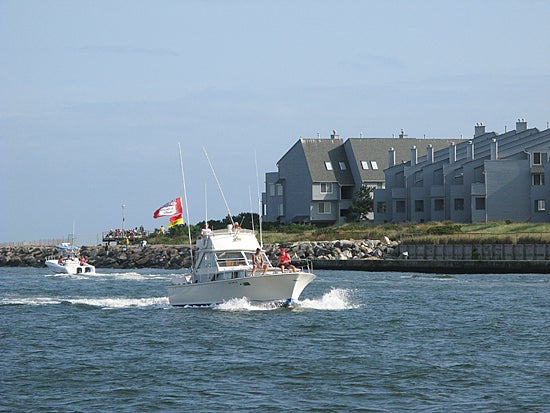 This ISO 200 JPEG shot had to have some contrast added in Photoshop. There are a few blown highlights on the boats and spray. 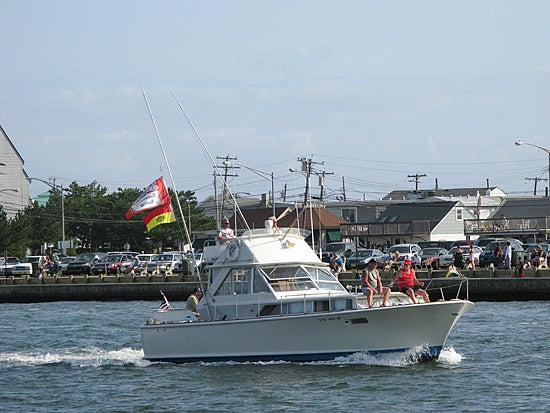 Again, I had to add some snap to this ISO 200 JPEG in Photoshop. 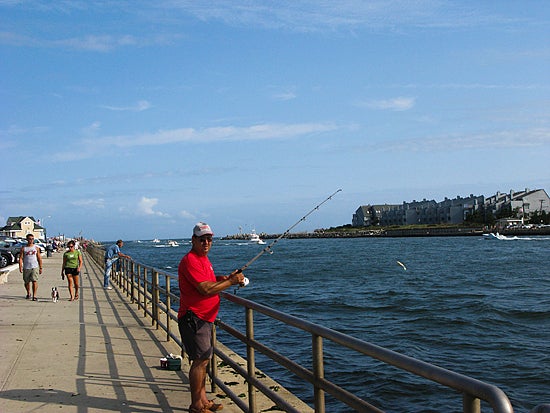 Evaluative metering kept detail throughout this ISO 200 JPEG, but again, contrast had to be boosted in Photoshop. The G9 macro will close-focus to about 1cm. This tiny flower was captured at ISO 200, and Adaptive Noise was cranked up during RAW processing, to make the background as smooth as possible, while still keeping detail tack-sharp. 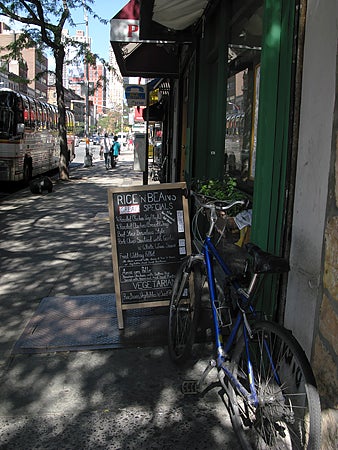 This midtown Manhattan scene was shot at ISO 80, metered and recomposed to pull as much shadow detail as possible. We cranked up Adaptive Noise to make the shadows as clean as possible. 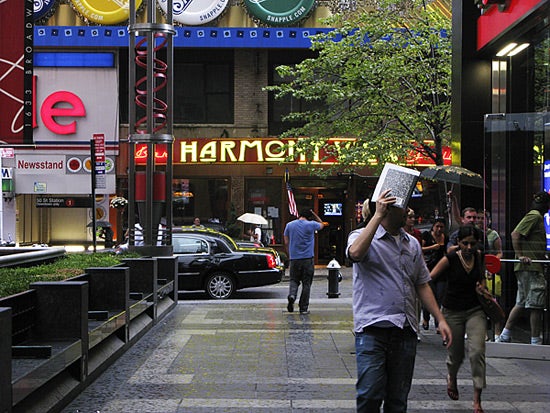 This ISO 200 JPEG scene at the start of a city downpour was dialed back to -1.33 EV to make the lights pop and give a feel of the coming storm. There’s great detail in a dark-palette scene at low ISOs. 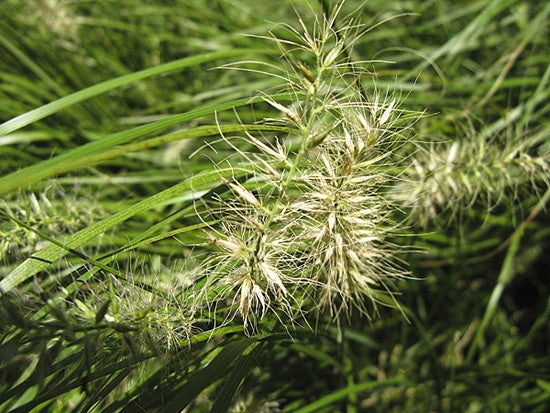 This is an ISO 200 JPEG macro shot at f/4. There’s great detail and great noise control. Again, contrast had to be boosted in Photoshop. 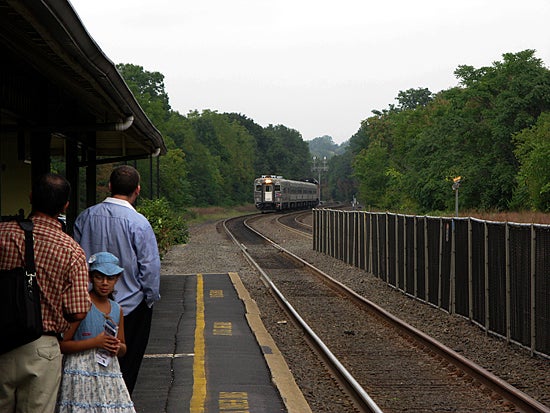 The G9 had a tough time keeping the ultra-hazy sky in this ISO 200 JPEG scene. There was a dramatic difference in an evaluative metering off just the sky, and off just the asphalt. 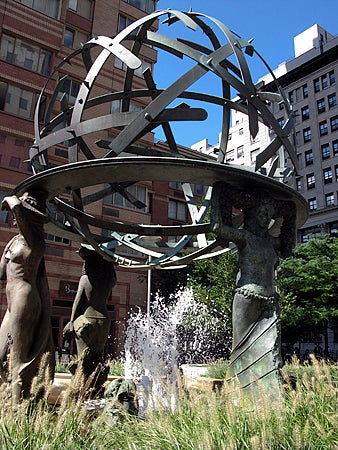 There’s very good shadow and highlight detail on this city fountain and just a touch of blown highlights near the sky. ISO 200, JPEG capture. 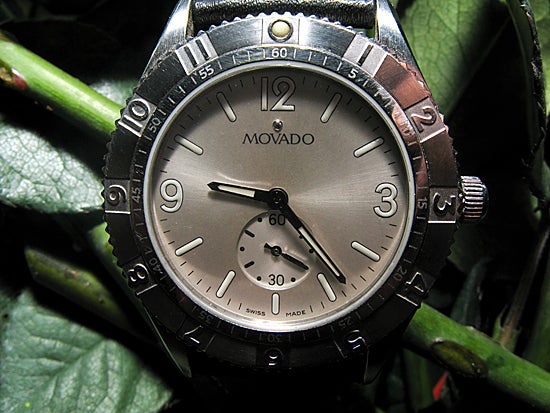 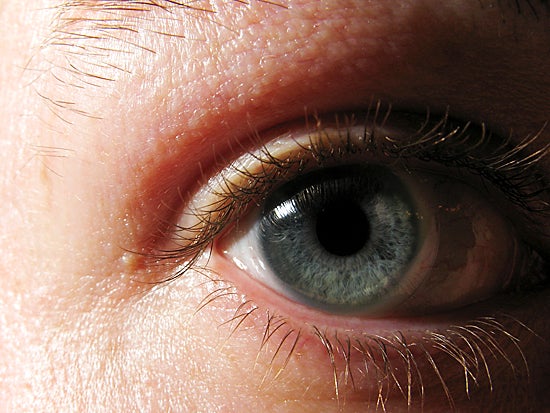