Camera Review: Canon PowerShot A710 IS

Canon upgrades the popular A700 with blur-busting image stabilization and increased resolution. 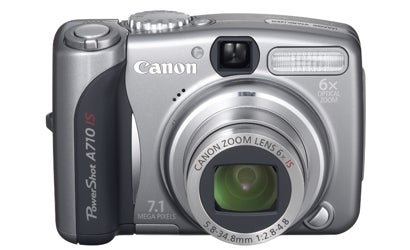 It’s funny how time flies. It seems like only yesterday we were reviewing the Canon PowerShot A700, which Canon announced at the PMA 2006 trade show this past March. Here it is October and Canon already has a new model in their popular A series to replace it, the PowerShot A710 IS.

To find out just what Canon did to improve on the A700, we headed to Giants Stadium in New Jersey, home of our beloved New York Jets, where Canon had lined up sideline access during pre-game warm-ups as part of its sponsorship of the NFL and the “Why We Love Football” contest.

As the name implies, the PowerShot A710 IS uses a lens shift-type Image Stabilizer (IS) system to detect and correct slight camera shakes that can cause image blur. Minute vibration gyros detect lens tilting caused by hand shake. These signals — up to 4,000 per second — are processed by a single-chip IS controller, which discriminates between hand shake and intentional camera movements. The IS feature really helped steady our shots as we snapped away at the guys from Gang Green.

The PowerShot A710 IS inherits many of the features found on its predecessor — 6x zoom, an extensive range of shooting modes, full manual control, VGA quality movie recording, ISO 800 shooting, and a 2.5-inch LCD screen — and adds an improved 7.1-megapixel sensor and a whole slew of new photo effects.

The design of the A710 IS is more curvy than the A700, and the camera sports a two-tone look with a curved, dark-plastic section on its grip. The camera might be just a hair bigger than the A700, yet it’s still well within the range of one-hand shooting. All the camera’s controls are nicely positioned within easy reach of your right hand’s fingers and thumb. It also has a bigger control wheel on the top of the unit that’s easier to turn. The battery/card slot is also upgraded from the A700, but I still fumbled with it a little while attempting to get the AA batteries and SD card in and out.

The 2.5-inch LCD retains a selectable Grid Line display for help with framing and leveling. Further assistance is provided by a useful 3:2 ratio guide, which displays an overlay of the print area for standard photo prints. A new overexposure warning feature indicates areas of overexposure in captured images. As an added bonus, A710 IS retains a valuable optical viewfinder. This real-image optical viewfinder enables framing without the LCD through the full focal range, which helps to extend battery life and gives you another composing option on sunny days.

The 20 shooting modes include Special Scene modes for help with many shooting environments you might encounter. There is no dedicated Sports mode per se, but the Children and are able to capture most action shots. A number of Manual modes give the more experienced user greater control over exposure settings. Artistic photo effects can be applied in-camera at image capture and in playback mode with My Colors, which tints and colorizes images. The PowerShot A710 IS also offers a choice of five movie mode settings including VGA (640×480 pixels) quality movies at 30 frames per second (fps) and QVGA (320×240 pixels) at 60 fps.

As with the A700, you can also attach accessory lenses to the A710 IS. A complete range of optional lenses includes wide (0.7x) and telephoto (1.75x) converter lenses as well as a close-up lens for macro photography. An optional High Power Flash extends the camera’s range on nighttime shots and expands the possibilities for creative flash work. The optional waterproof case, which is constructed with anti-fog double glass and a flash light diffusion plate, allows full control at depths down to 40 meters.

The A710 IS powered up quickly, about 1.5 seconds according to our stopwatch, and the first image was captured at 1.8 seconds. Continuous shooting was good, as we were able to capture the Jets running through some pre-game plays. Image quality was quite good as well. Colors were sharp with a plenty of detail. Although we were shooting mostly during the day, we did experience some noise after ISO 200 as the day got more overcast. Shooting indoors, we did experience some slowness with flash recycling. 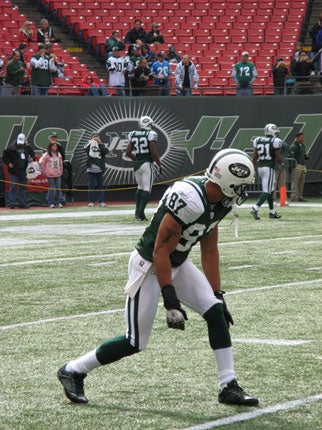 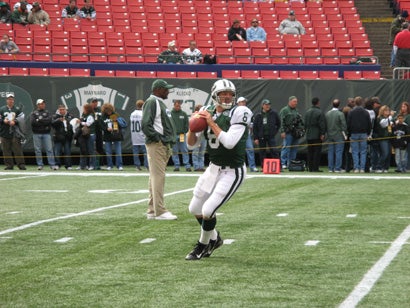 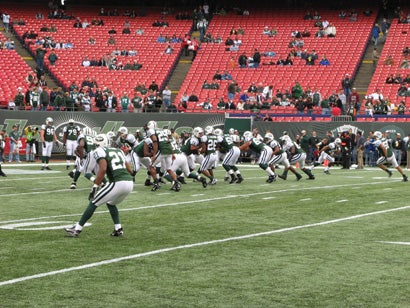 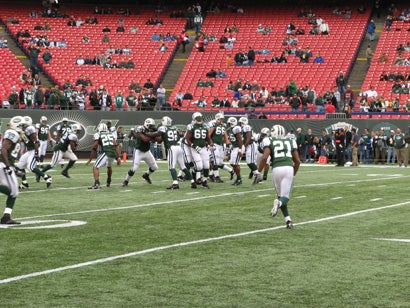 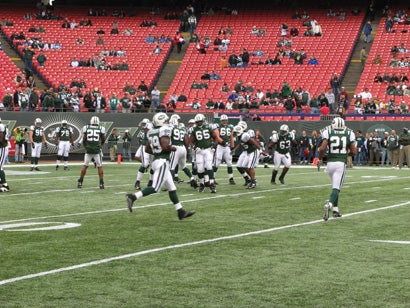 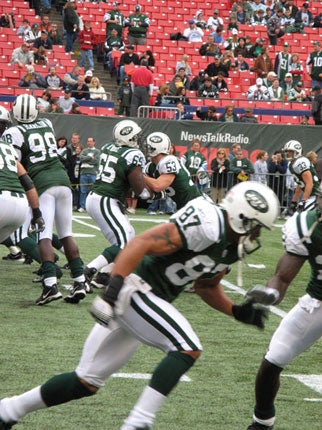 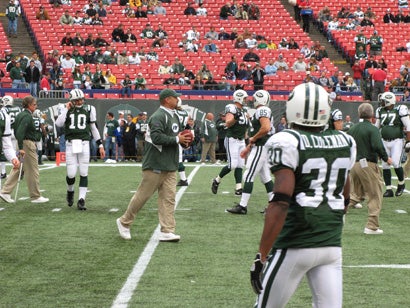 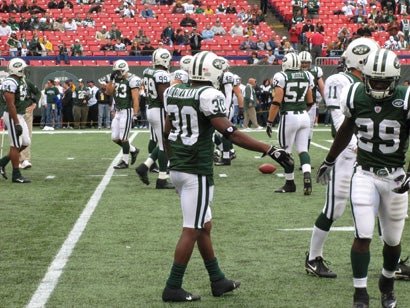 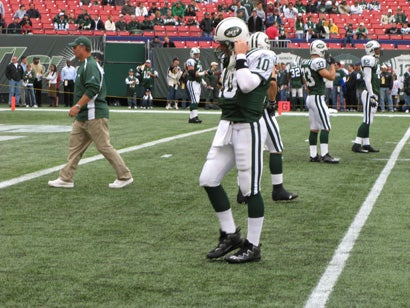 Jets QB Chad Pennington and the Jets would have a big day, beating the Lions 31-24. 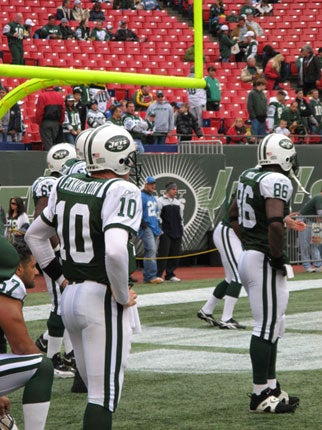