With new cameras hitting the streets, last year's models can be had on the cheap. 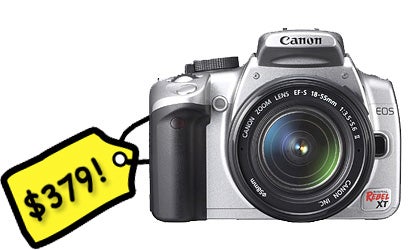 Out with the old, in with the new. Sure they’re not the latest and greatest, but last year’s DSLR models are certainly worth a long hard look, particularly for those on a tight budget. Among others, Canon, Nikon, Sony, Olympus and Pentax have all released cutting edge models for 2008, but if you’re not dying to have a live-view display or enough megapixels to plaster a semi with that adorable picture of Toto, settling for the best of 2007 might be worth the savings as retailers move inventory to make room for new models. We take a look at last year’s models and let you know which camera, old or new, is the best buy. Current body-only prices for each camera are listed from four different merchants with kit pricing (body plus zoom lens) in parentheses if available.

With the lowest body-only price of $379 offering a savings of 53% over Canon’s newest model, the 8-megapixel XT is the biggest bargain of the bunch, appealing to photographers on a tight budget. Choosing the older model doesn’t come without sacrifice though, as the XSi (available in late April) includes a 12.2-megapixel sensor and larger LCD with live-view support.

With all prices including a kit lens, snagging a D40 for about $480 isn’t the deal of the century, but the sub-$500 kit is great for photographers looking to make the jump to a DSLR without dropping loads of cash on new gear. When including a kit lens, the newer 10.2-megapixel D60 (available now) will run you about $730, leaving a 34% price gap between the older model.

If you don’t mind waiting until late-May, the $500 E420 will include a 2.7-inch live-view display and will carry the distinction of being the “world’s smallest digital SLR.” With only a $100 difference in price from last year’s model, the E420 will be the better buy when it’s released, unless the older model sees a significance drop in price come May (presuming there’s any E-410s left!)

With the K10D offering a 35% savings over the newer model, photographers in need of a very capable and weather-tough sub-$1000 digital SLR should consider picking one up now. The just released K20D offers several advantages over its predecessor though, including a 2.7-inch live-view display, and a newly developed 14.6-megapixel sensor.

Though not a direct revision to the A100, the Sony Alpha A350 offers a 14.2-megapixel sensor and 2.7-inch tilting live-view LCD at a 40% premium over Adorama’s price of $449.95 for the older model. While not without its improvements, the significantly higher price of the A350 makes the A100 the best buy for photographers looking to snag a great closeout deal.