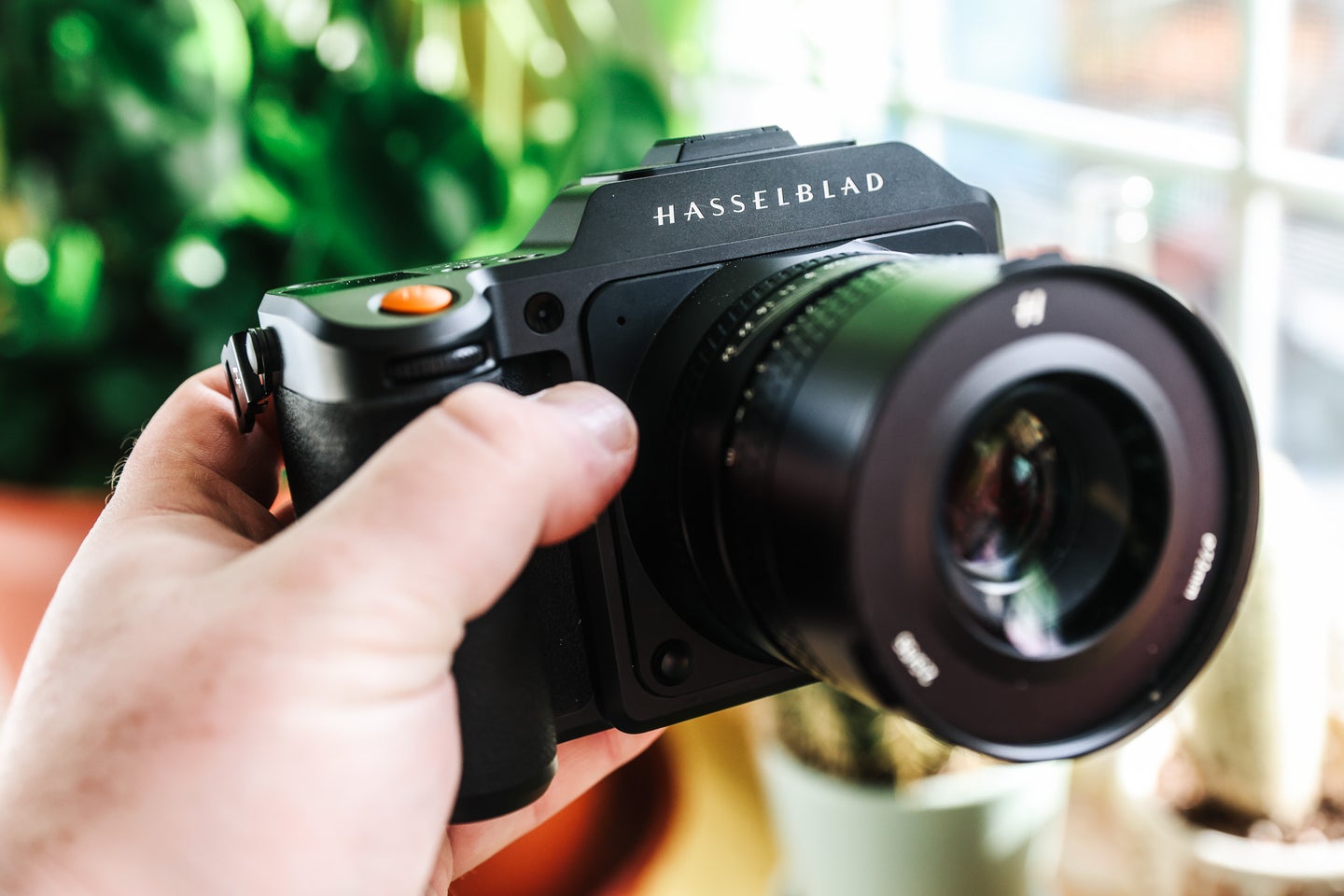 It's chunky, but in a good way. Stan Horaczek
SHARE

The fitness and bodybuilding community has a phenomenon that they call the “sleeper build.” It’s a term for someone who doesn’t look particularly strong or jacked until they flex or lift. It comes from the car world, where a “sleeper build” is a normal-looking car with an unexpectedly powerful engine inside. Having spent roughly two weeks with Hasselblad’s X2D 100C medium format digital camera, I can confidently say that it fits the photographic definition of a sleeper build, hiding absurd amounts of imaging power in a slick and relatively unassuming body. The result is a truly wonderful—if challenging—camera.

As the name suggests, this isn’t the Swedish camera manufacturer’s first foray into a rangefinder-style medium format digital camera. The original X1D 50C debuted back in 2016, with the X1D 50C II following it in 2019. Both relied on 50-megapixel medium format (44mm x 33mm) sensors and produced excellent image quality despite a cadre of performance quirks like relatively sluggish contrast-based autofocus and painfully long startup times that could lead to missed shots.

The X2D 100C boosts the resolution up to 100 megapixels, adds phase detection autofocus (finally), and introduces a tilting touchscreen display to the back of the camera. As in previous models, the camera lacks a mechanical shutter and instead relies on the leaf shutter mechanism built into each XD-mount lens as well as the purely electronic shutter mode enabled by the sensor itself.

It’s purely a photographer’s camera—it completely lacks any kind of video capture, so if you’re looking to shoot motion, you’ll have to bust out your iPhone camera to capture the action. Hasselblad built the X2D 100C to create beautiful still images and it truly succeeded.

While some medium-format digital cameras like the Fujifilm GFX-series bodies rely on a familiar design with a built-in mechanical shutter, the X2D 100C employs a more old-school solution. Every XD-mount lens has a built-in leaf shutter mechanism that opens and closes every time it takes a photo. Each actuation emits only a tiny “click” sound rather than the “kathunk” that comes from a mechanical shutter. That reduces the possibility of camera shake and allows for super-fast flash syncing.

The camera has grown slightly in both height and thickness to accommodate the new (and very welcome) sensor-shift image stabilization system. The top of the camera sports two function buttons, as well as a power button, shutter release, and a screen to display current settings. The back of the camera wears four function buttons running down the right side of the screen, as well as AE-L and AF-D buttons along the top edge. As for dials, there’s a front-mounted wheel that rests easily under a pointer finger and another at the top of the rear grip meant for operation with the right thumb.

It’s a relatively sparse layout, but it feels right for the camera. It doesn’t have the shotgun blast of buttons and controls found on cameras like the Fujifilm GFX cameras or most full-frame mirrorless models.

While the layout is elegant compared to typically utilitarian medium-format cameras, this is still a relatively large camera. The very substantial front grip and sturdy thumb rest make it easy to hold. But, don’t expect to easily reach the AF and AE buttons if you’re only holding the camera with one hand.

The new tilting screen adds an extra level of utility, which I really appreciated during my review period. It allows for waist-level shooting while looking down at the camera, similar to what you’d get with an old-school film Hasselblad. The large viewfinder protrudes a bit from the back of the camera, so it does block a small portion of the screen looking straight down at it. It’s annoying, but not deal-breaking.

That viewfinder bump is worth the space it takes up, however. The 1.0x magnification makes the eye-level finder large and bright. It’s a half-inch display with 5.8 million dots of resolution, which is ample, even for use with manual focus lenses. It’s one of the best-looking viewfinders you’ll find on a mirrorless camera full-stop.

This is where the Hasselblad X2D 100C really shines. I shot in raw format for the vast majority of my review period because that’s the draw. Each raw file measures 11,656 x 8,742 pixels and offers 16-bit color, which makes them incredibly flexible during the editing process.

I relied on Adobe Lightroom Classic for my raw editing because it’s PopPhoto’s standard editing program. Plus, Capture One isn’t keen on supporting Hasselblad raw files since it’s made by one of the company’s biggest competitors.

Combined with the XCD 2,5/55V, each raw file produced incredible levels of detail and extremely accurate colors. Everything from vibrant holiday decorations to delicate skin tones render meticulously and hold up well, even under heavy edits.

The resolution and overall image quality are enough to spoil detail-hungry photographers, even compared to 45-megapixel full-frame cameras and 50-megapixel medium format models. Image quality is why you’d buy the X2D 100C, and you won’t be disappointed.

Images display perfectly acceptable noise levels (at least to my taste) even when pushed above ISO 6400. That higher-ISO performance is important with a 100-megapixel sensor because even a small amount of camera shake can seriously detract from a 100-megapixel image. All that resolution can amplify imperfections, so I prefer to keep my shutter speeds on the safe (faster) side and deal with a little extra noise.

The new built-in sensor-shift stabilization system also helps in the fight for sharper images. It won’t have you hand-holding the camera at half-second exposure times. But, it did seem to help my exposures taken right on the border of possible shake.

While image quality is the most important thing when it comes to a camera like this, it’s not the only factor you have to consider.

Hasselblad equipped the X2D 100C with a new phase detection autofocus system, which is a big step up from the original contrast-based system, which struggled in complex situations and in low light. While this new system is very usable, it lacks some features that have become increasingly common at just about every camera level. The most prominent example is the lack of face and object tracking. You can’t simply press the button and expect the camera to keep track of your portrait subject’s face like you can with most other modern cameras.

You can also expect something of a learning curve when it comes to selecting the focus area. I would have loved a joystick control on the back of the camera to quickly move the focus point around the frame. Tapping the touch screen can quickly move the focus point to any area in the frame, but I find that very awkward, especially when I’m trying to shoot with the camera held up to my eye. The other option involves rotating the control wheels to move the AF point on one axis at a time. This method works OK, but it takes some getting used to and it still feels slower than simply mashing a joystick controller.

If you want to shoot completely silently or you’re adapting older, manual-focus lenses to the X2D 100C, you’ll have to rely entirely on the electronic shutter. Purely electronic shutters (like the one found in Sigma’s quirky fD camera) tend to struggle when capturing motion in a scene, and that’s true for the X2D 100C as well. That 100-megapixel sensor just can’t read out quickly enough to freeze a moving object in place. This may not come into play for many photographers, but if you’re thinking about adapting holder Hasselblad lenses to the X2D 100C, it’s worth knowing about.

With pretty much any new camera—especially mirrorless models—I always recommend at least one extra battery and that remains true for the X2D 100C. Each $99 battery is good for somewhere between 300 and 400 shots, depending on your usage. That’s a big step up from previous models, but also maybe a little shy of what you’d want for a whole day spent shooting.

Who should buy the Hasselblad X2D 100C?

This $8,199 camera is looking for a very specific set of detail-obsessed, design-conscious photographers with a budget that can accommodate the $3,000+ lenses required to get the most out of this sensor.

It’s a professional camera, but it needs to fit your shooting style. If I was bringing this to a wedding shoot, for instance, it would be great for the posed portraits, details, and reportage-style getting-ready photos. During the ceremony, reception, and even some of the more motion-dependent portraits, I’d definitely reach for the comfort of face-tracking AF with my full-frame mirrorless camera.

If money was no object, I’d absolutely own one of these to use as a travel camera. The files look absolutely exceptional and the whole experience scratches the creative itch in a way my medium-format film cameras typically do. And, of course, I’d put a pace of gaff tape over the Hasselblad logo and make it a true photographic sleeper build.

Here are some more sample images