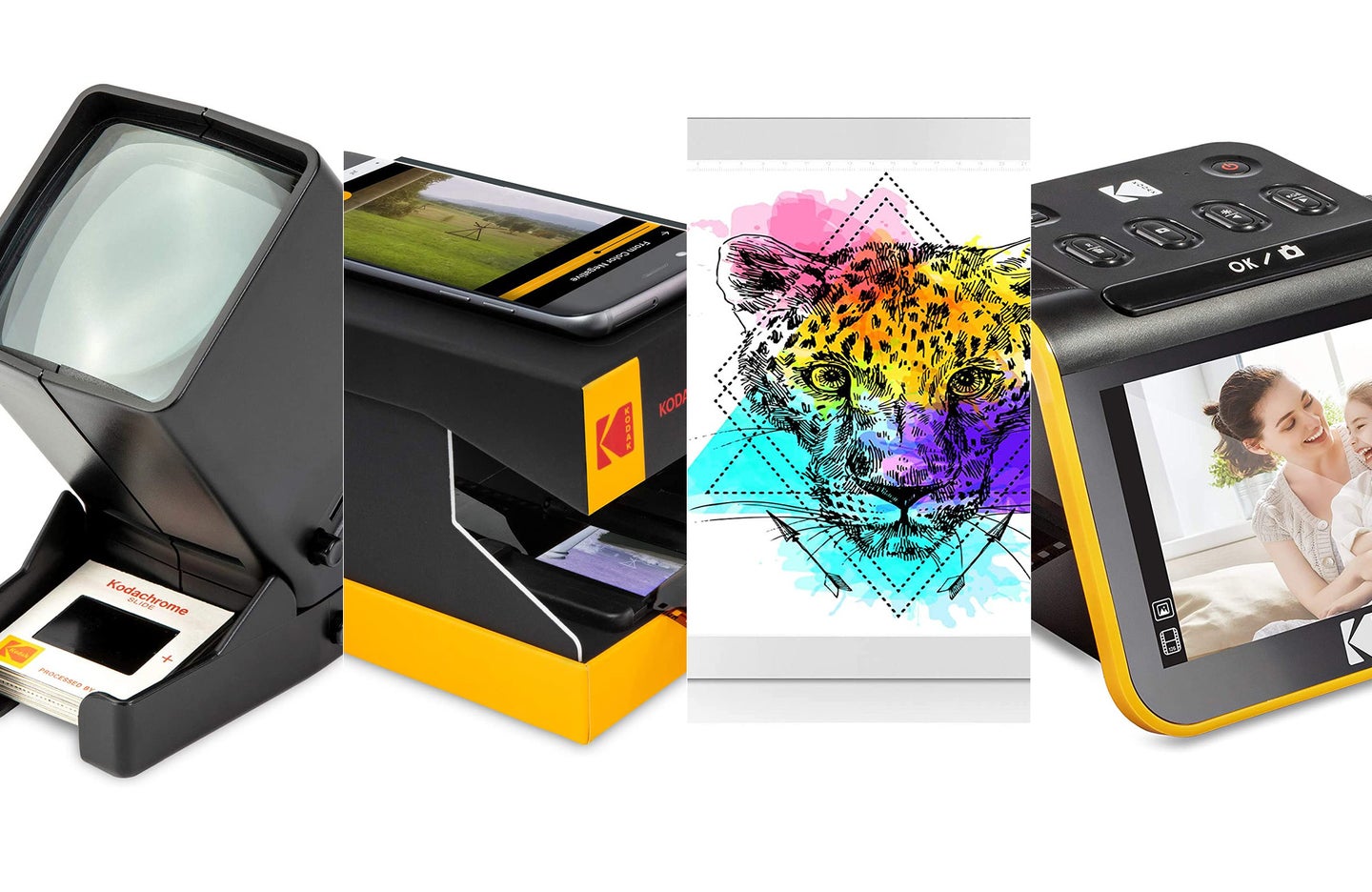 Whether you just want to view slides or scan them to digital files, these devices can help.

Film photography is as popular right now as it has been in years, which has made slide viewers relevant once again. Slide film (sometimes known as reversal film) creates positive images directly on the substrate. Once you develop the film and hold it up to the light, you see the finished photo instead of a negative. Slide film truly is magical and beautiful, but the images are small. You need a way to view them with magnification. The best slide viewers offer a convenient way to observe these images in all their glory.

Things to consider when shopping for the best slide viewers

Before we get to the specific recommendations, there are a few features and terms you should understand. Here are some essential considerations and definitions to help you find the best slide viewers.

You don’t need a digital sensor to view a slide. During the old film days, people would simply put the slides onto a light box and view them with a magnifying loupe. There are still analog slide viewers that rely on magnifying glasses and a source of illumination.

More common, however, are digital viewers, some of which also include scanning functionality. Digital viewers are still simple to use.

Viewing slides requires illumination from the back of the film. Some very simple viewers allows people to simply hold them up to the sun or another light source. Other analog viewers have built-in illumination, which offers much more consistent and predictable results.

Scanners go one step beyond simple viewing and create a digital file of the image on the slide. Scanners typically require extra steps beyond simple viewers, but they preserve the photo from the slide, which is great if the slide is deteriorating. Basic scanners typically only create small JPEG images, but several consumer scanners (like the V600 on this list) can capture high-quality scans with relatively little effort.

When someone mentions slides, people typically envision 35mm frames encases in cardboard frames. In reality, though, slide film can also come in strips or larger medium format sizes. Most slide viewers only accept 35mm film, but scanners will sometimes accept medium format or odd sizes. Going for the light table and loupe strategy will let you look at whatever size film you may have.

Why it made the cut: This simple, all-in-one solution lets you view film images and scan them with almost no learning curve.

Most of the old slides you’ll find kicking around out in the world were likely made by Kodak, so it’s only fitting you look at them with a Kodak machine. This compact scanner accepts film strips of 35mm, 110, and 126 film. It can also accept mounted slides. That covers most of the common old film formats that you may find in legacy collections.

Feed the film into the machine and it will display the image on its five-inch display. It can then make up to a 22-megapixel scan of the image. That high-res mode requires the machine to do some interpolating, but the quality is very solid when compared to the small amount of work this machine requires.

The scanner allows for simple one-click adjustments and then saves the images to an SD card for easy transfer to a computer.

This is an affordable, simple way to preserve old memories saved to film.

Why it made the cut: This self-illuminated analog solution provides an old school method for viewing slides.

If you want to view slides in an old school way, this magnifying slide viewer nails that aesthetic. Insert the slide or film strip into the bottom of the device and built-in LEDs illuminate it. The lens above magnifies the image by three times so you can view it much larger than you would with a naked eye.

While this device won’t make digital scans of your images, it can be handy in the scanning process. You don’t always want to scan every single image, so this is a great way to preview the slides before committing the keepers to the full scanning process.

It weighs just one pound and the light box runs off of four common AA batteries so it’s easy to lug around if you want to bring it to your parents’ house or any other location you might run across old photographs.

Why it made the cut: This flatbed scanner can make high-quality digital versions of film photos.

Epson’s flatbed film scanner can accept just about any kind of old film you may find, including Polaroids. The transparency mode scans just about any type of film, including slides and negatives in strips or mounts. It can handle both 35mm and medium format 120. It can technically handle other odd formats, but it doesn’t come with the required holders so you may need to kludge by taping the strips directly to the glass. The scanner creates high-res versions of the film images while automatically removing dust, hair, scratches, and other damage automatically.

When you’re done scanning film, you can put the opaque top back on and scan reflective objects. So, if you have a lot of old Poloaroids kicking around that you want to preserve, this scanner can do it.

Epson’s built-in software is relatively simple to use, but can be a little frustrating at times if you want to go in and exercise some manual control. But, in the end, this is one of the highest quality methods around for preserving old images without spending a ton of cash. Plus, it works as a regular office scanner once you’re done with your film.

Why it made the cut: This super-affordable option folds up into a small box for easy transport. It also provides digital versions of film images directly onto a smartphone.

This super-simple setup includes an LED panel in its base and a platform with a hole in the top. Turn on the light, insert the film, put your smartphone’s camera in the hole and you’re ready to view slides and film. It accepts mounted slides, as well as film strips. You can view both color and black-and-white images.

The companion app offers some basic editing features, so you can tweak the image before you save it. You can also use other scanning apps to capture the images if you’d prefer different software.

The whole thing is made from cardboard, so it’s not meant for heavy duty work. That does, however, make it extremely easy to lug around because it’s so light. The whole thing collapses down into a small box for easy transport.

Why it made the cut: A simple light box will make you feel like an old school magazine editor when you review slides with a loupe.

A simple light table provides the illumination you need to view slides. This model is meant mostly for drawing and tracing, but it provides a large illuminated area for viewing film. Just lay the strips or slides down on the lighted surface and they’ll come to life. You can use an app on your phone to capture digital versions of them. Or, you can use a magnifying loupe to view them in real time.

The tracing box has a built-in rechargeable battery that lasts up to 3.5 hours on a charge. The LEDs don’t flicker and provide a nice, even backlight across the entirety of the surface, which is good for observing film. The light output is adjustable so it won’t scald your eyes when you look at it through a loupe.

This is a great option for those who just want to see the slides without worrying too much about digital conversion.

Q: What is the best way to view old slides?

If you want to view slides the old fashioned way, a simple light table with a loupe will treat you just fine. It’s how I used to select final images when I was doing magazine photography on film. Now, however, a scanner is probably your best bet because it will create a digital file of the image and you can preserve the photos.

Q: How much does a slide viewer cost?

Simple slide viewers can be as cheap as $10 and go up into very expensive scanners. Our top pick on this list costs about $169, which is likely cheaper than sending your images off to a service that scans images for you. With slides, you can also just hold the images up to a vaguely white light source and see the image for free.

Q: Can I scan slides into my computer?

You can. Some options provide extremely simple scanning at relatively low resolution. If you want high-fidelity scans, you’ll need more expensive equipment that requires a learning curve to get the best results. We recommend the Epson V600 as a great all-around film scanner. If you want more control over your negative film scanning, you can capture raw images with thes canner and try Negative Lab Pro for Lightroom to finish the edits.

Q: How do slide viewers work?

Most of the basic models simply shine a light through the back of the slide to illuminate the image and then magnify it. Some use a digital sensor for that magnification while others just use optical lenses. Scanners capture line-by-line images of the slides and convert them into digital files for later viewing.

Methodology: How we chose the best slide viewers

I have been shooting film personally and professionally for nearly two decades and that includes tons of slide film. I curated this list based on a combination of personal experience, editorial reviews, user feedback, and spec comparisons. I used an Epson V600 as my main film scanner for several years before upgrading to a V800 and an OpticFilm 120 (both of which are great, but overkill for this article).

For this list of the best slide viewers, I concentrated on choosing models that are simple to use and relatively affordable. I also provide a variety of different methods, many of which include digital scanning to preserve the images as you view them.

While the KODAK Slide N SCAN Film and Slide Scanner isn’t a pro piece of equipment, it is a great way for people to quickly view and scan old slides and film. Send-away services can be extremely expensive, so buying this machine may actually save money compared to those options. If you’re waiting around to scan those old slides, don’t. It doesn’t take much to destroy old photographs and then they’re lost forever.