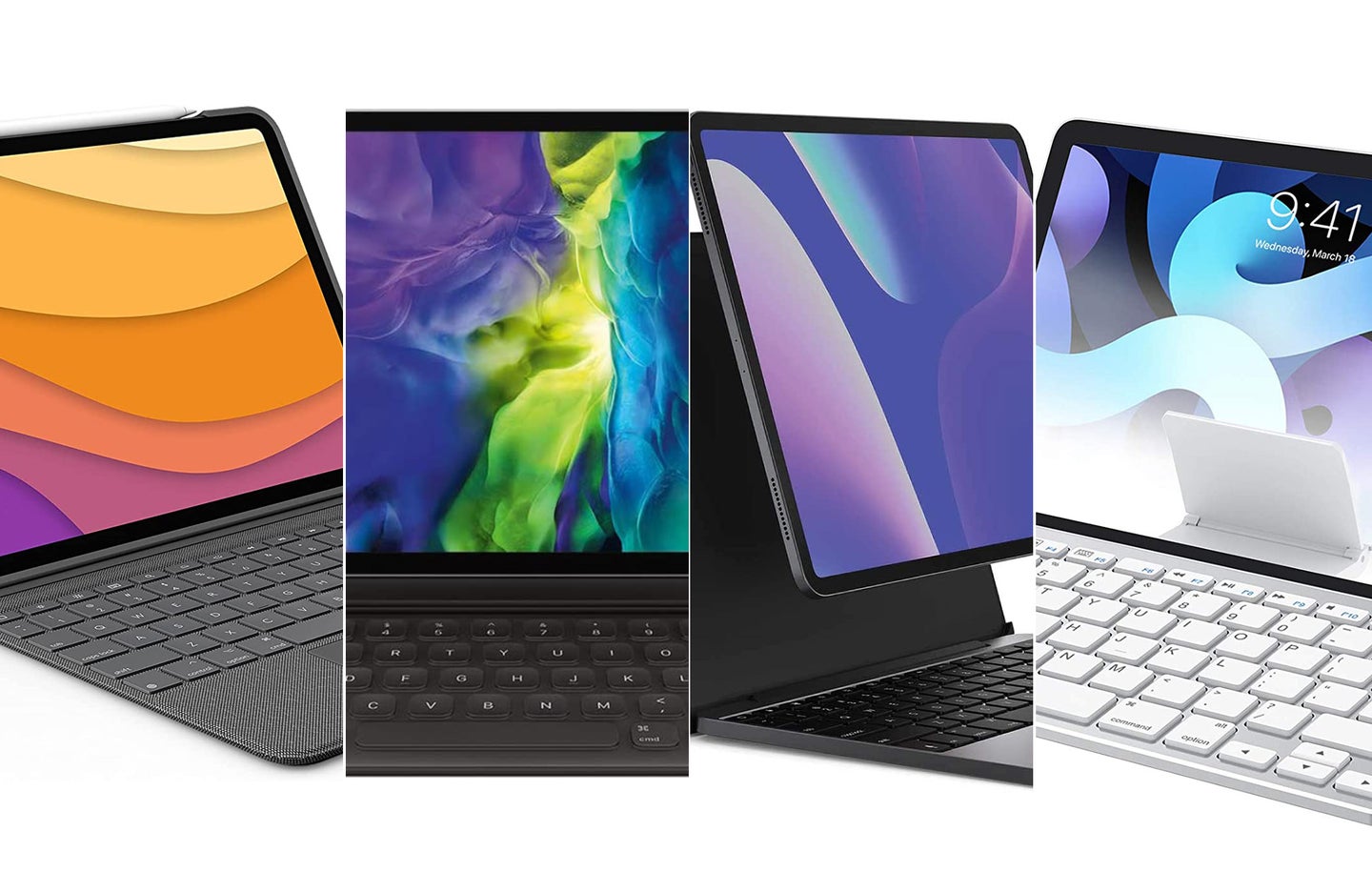 Never endure slow, frustrating typing on the touchscreen ever again.

The on-screen iPad keyboard works well enough for texts and search prompts. But, try typing anything substantive with that touch-based input system and you’ll wonder if it’s worth trying to type in the first place. Mom has another birthday next year, right? She can get a heartfelt email then. That’s where dedicated iPad keyboards come in. Whether you want something plush and elaborate or simple and spartan, there are plenty of options out there on the market. We have curated this list of the best iPad keyboards to help you find the perfect fit for your tablet typing needs.

Things to consider when shopping for the best iPad keyboards

The vast majority of the iPad keyboards on the market offer simple, membrane-style keys without very much travel. As a result, they typically can’t match the luxurious feel of a desktop—or even high-end laptop—keyboard. It’s always a good idea to try typing on a keyboard before you make a purchase, but if you can’t, just manage your expectations. Expect portable iPad cases with built-in keyboards to feel relatively flat and quiet unless you get a dedicated Bluetooth desktop keyboard and use that instead.

Many iPad keyboard cases connect to the tablet via its built in Smart Connector. This is a direct hardware connection and it doesn’t require Bluetooth to work, which is why you don’t have to go through a setup process to get it working. Just attach it and start typing. Some models do require Bluetooth, however, and they offer some extra flexibility to make up for the inconvenience of having to go through a setup process. For instance, you can typically attach them to several devices at once and you don’t need to keep the keyboard touching the iPad for it to work.

If you’re only planning to use the keyboard as part of the iPad case, then you probably don’t need the flexibility and cost that comes with a Bluetooth option.

The iPad’s relatively lightweight represents one of its big strengths when compared to a typical laptop. Adding a case that’s too bulky and unwieldy undoes some of that advantage. Apple’s simple Smart Keyboard cases are light and simple, which is perfect for those who travel a ton and want to cut as much bulk as possible.

Manufacturers like Otterbox make extremely tough cases that add serious protection to iPads. Unfortunately, those cases tend to involve thick materials, which don’t work well with keyboard cases that need a direct connection. If you’re planning on using a super-rugged case, opt for a keyboard with Bluetooth so you won’t have to struggle with getting it connected.

Why it made the cut: Ample protection, a solid keyboard, and a built-in touchpad make this a great full-featured iPad keyboard case for just about any user.

The sturdy case has a tough fabric layer on the outside which protects the device and the keys while you’re in transit. The magnetic closure wraps around the Apple Pencil to add an extra layer of protection when the case is shut.

You don’t get Bluetooth, but that also means you never have to worry about charging the keyboard because it draws power directly from the device when it’s directly attached. The Kickstand offers several angles of support and it’s even usable in your lap if you don’t mind a little balancing.

This is one of our favorite overall iPad cases and the fact that it has a keyboard makes it a no-brainer for this list.

Why it made the cut: Apple’s first-party keyboard case is as simple as they come.

Apple’s first-party keyboard case for the iPad Pro (11-inch) and iPad Air doesn’t try to get fancier than it needs to be. Simply snap the iPad into the magnetic case and it immediately works.

It weighs just 10.5 ounces and it’s comparatively thin, which makes it ideal for people who do a ton of traveling and want to cut down on what they carry as much as possible. The keys are relatively flat, but well-spaced and easy to type on when you’re resting on a flat surface. Trying to type on a lap is more difficult, but not impossible. This keyboard really shines on an airplane tray table.

Other models at this price point offer more features, but none of them match the build quality and simplicity of Apple’s own offering.

Why it made the cut: This case makes the iPad Pro feel like a full-fledged laptop.

This advanced case makes the iPad look and feel like a traditional laptop. It offers a full keyboard with roomy keys that provide a satisfying press. A full-sized, multi-touch trackpad offers another way to navigate the OS without having to constantly reach up and touch the screen every time you need to scroll or click.

This model has a battery built-in, which enables some unique features like backlit keys with three levels of illumination. Bluetooth 5.0 allows it to connect instantly as soon as the case opens. The battery can last for up to three months at a time depending on usage. Obviously, if it’s your main machine and you’re using it every day, that number will drop significantly.

While it’s expensive, this is one of the most advanced iPad keyboards around and it changes the way you’ll use the device.

Why it made the cut: Apple’s expensive case completes the iPad Pro experience as Apple envisions it.

Apple’s flagship iPad keyboard costs nearly as much as a base-model iPad all on its own. While some of that is certainly the Apple tax in effect, it’s also a rather great product. The iPad snaps easily into the magnetic case. Once it’s open, a very clever hinge holds the iPad firmly where you put it.

The keyboard itself eschews the typical membrane mechanisms, which feel cheap and unsatisfying. Instead, Apple made the Magic Keyboard much more similar to what it puts in its MacBook computers.

This is a great option for people who use their iPad like a laptop most of the time because it doesn’t offer a ton of different orientations.

Why it made the cut: This is a great option for users who only occasionally need a keyboard.

This isn’t a keyboard case, but rather a stand-alone keyboard with a bracket that holds the iPad upright when in use. The Omotion draws some rather obvious inspiration from Apple’s own wireless keyboards.

The keys are spacious and provide a decent enough motion with every stroke. This is a budget keyboard, so you should expect to make some concessions. For instance, it connects via Bluetooth 3.0, which is now several generations old. It also requires AAA batteries rather than relying on a rechargeable cell. Still, for roughly $20, it’s hard to argue with anything that simply works like this keyboard does.

Why it made the cut: It can connect to up to three devices at once and switch between them with a simple button press.

Sometimes you want to use your iPad with several other devices. Logitech’s Bluetooth keyboard can simultaneously connect to three gadgets, including iPads, computers, and even smartphones. Switch to the device you want by simply pressing a button in the top row of keys.

It doesn’t offer a rechargeable battery, but it does promise roughly two years of battery life before the two AAA cells need replacing. While this board won’t match up against a dedicated desktop mechanical model, they keys are comfortable enough for long typing sessions.

While this isn’t ideal for people who travel a ton with their iPads, it can connect to devices like Apple TV, which make it very useful around the house.

Q: How much do iPad keyboards cost?

The cheapest models can go as low as $20 and sometimes even cheaper if you catch a sale. Apple’s first-party offerings start around $150 and go up from there. The Magic Keyboard for the largest iPad Pro costs $299, which is a lot for an accessory.

Q: Does the Magic Keyboard protect the iPad?

The Magic Keyboard protects the back of the iPad at all times. It will only protect the iPad’s screen when it’s closed.

Q: Can you lay the iPad flat with Magic Keyboard?

The Magic Keyboard does have some wiggle room when it comes to the angle at which it holds the iPad. Unfortunately, that doesn’t include laying it down flat. If you want it flat, you’ll have to take it out of the case.

Q: What kind of keyboard works with iPad?

Some keyboards connect directly to the iPad through the magnetic connector. But, you can use pretty much any Bluetooth keyboard if you simply go through the pairing process. That’s not very helpful for traveling, but those who only need a keyboard when sitting at their desks have a ton of options.

Q: Can all iPads use keyboards?

Yes, any iPad can connect to a keyboard. They will work with Apple’s own direct-connection keyboards as well as pretty much any Bluetooth keyboard. There are exceptions, of course, but iPads work with the vast majority of options out there. If you’re using a Windows-oriented keyboard, however, the keys may be slightly different than you’re used to just due to the different key names in the OS.

Methodology: How we picked the best iPad keyboards

I have reviewed just about every new iPad released in recent years for PopPhoto and Popular Science. I’m writing this review on an iPad Air in our best overall case right now. In order to choose the best iPad Keyboards, we took a broad view of the space and then narrowed down the choices based on a few key factors. We looked for models that offer a comfortable typing experience as well as a simple setup process. We also prioritized models that are durable and come from reputable manufacturers. We relied on personal experience, editorial reviews, user feedback, and spec comparisons to make our final decisions.

If you’re looking for a keyboard case that does everything you could want, Logitech’s Combo Touch case likely has it. It connects directly to the iPad, offers a solid keyboard, and holds onto the Apple Pencil when you’re in transit. It’s not the cheapest option out there, but iPads are expensive and spending a little money now on a solid case could prevent big headaches down the road.