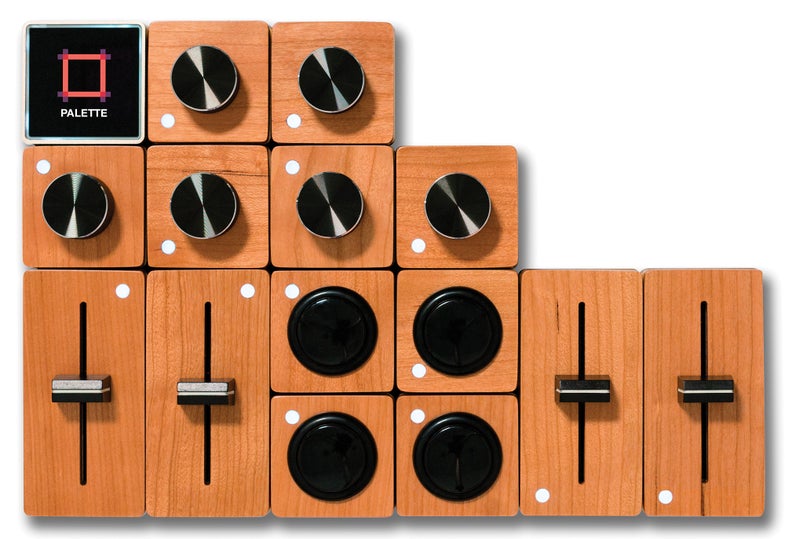 At first glance, Palette looks like a piece of an audio mixing board or maybe a fancy controller for a video game. In reality, however, it’s a customizable input device designed to add tactile controls for photo editing programs such as Adobe Photoshop and Lightroom.

Initial setup is almost shockingly simple. You download the app to your computer, plug in the “core” module that holds all of the electronic guts, and then snap the modules together with the built-in magnets.

There are three types of controller modules to arrange: a mixing-board slider, an arcade- style button, and a sturdy rotating dial. I reviewed the Expert Kit ($299, direct from palettegear.com), which includes two sliders, two buttons, and three dials.

Once you’ve assembled every- thing, then comes the tricky part. Assigning functions to each of the inputs is very easy to do using the software, but actually figuring out the optimal arrangement for all of the pieces and buttons can seem daunting. Does the knob work better for adjusting highlights, or should that be a slider? I switched the functions on the buttons back and forth dozens of times before figuring out what works best for my own workflow. After a fair bit of time spent futzing with the arrangement, I finally figured out my optimal set-up and dove into a full edit of a daylong photo shoot.

The dials are far and away the most useful modules. They have a fantastic tactile action and allow you to make adjustments extremely accurately and intuitively. The sliders are handy, but they’re less precise, so they’re better left for sweeping adjustments. I found the buttons most useful when culling and editing a big take. One button added or subtracted the photo from a collection, while the other skipped to the next photo. I usually do this with keyboard shortcuts, but it was fantastic to be able to sit back and do it with simple button presses.

When this new system first hit Kickstarter, some photographers questioned its overall ergonomics, but in use I found that it liberated me from the slouched-shoulder pose I sometimes hold for hours during an editing session. I ended up with the Palette at my left hand, while my right hand operated the mouse and the odd keyboard short- cuts. The simple act of varying the movements helped relieve some of the sore “editing elbow” I’ve gotten in the past.

There are some downsides to the system. It’s relatively pricey to buy into, but there’s a starter version that can be expanded with extra modules between $30 and $50. It’s also not very portable, but without a real desk, I can’t see wanting to use it anyway, unless you’re just using the buttons for cutting.

Ultimately, the Palette is not for everyone, but you also shouldn’t write it off as a novelty. While it probably won’t reach nearly Wacom’s same kind of penetration as the venerable graphics tablets, this could profoundly change the way some people edit photos and video.