A new book by the duo behind the Oscar-winning film, 'My Octopus Teacher,' shines a light on mysterious sea creatures, both large and small. 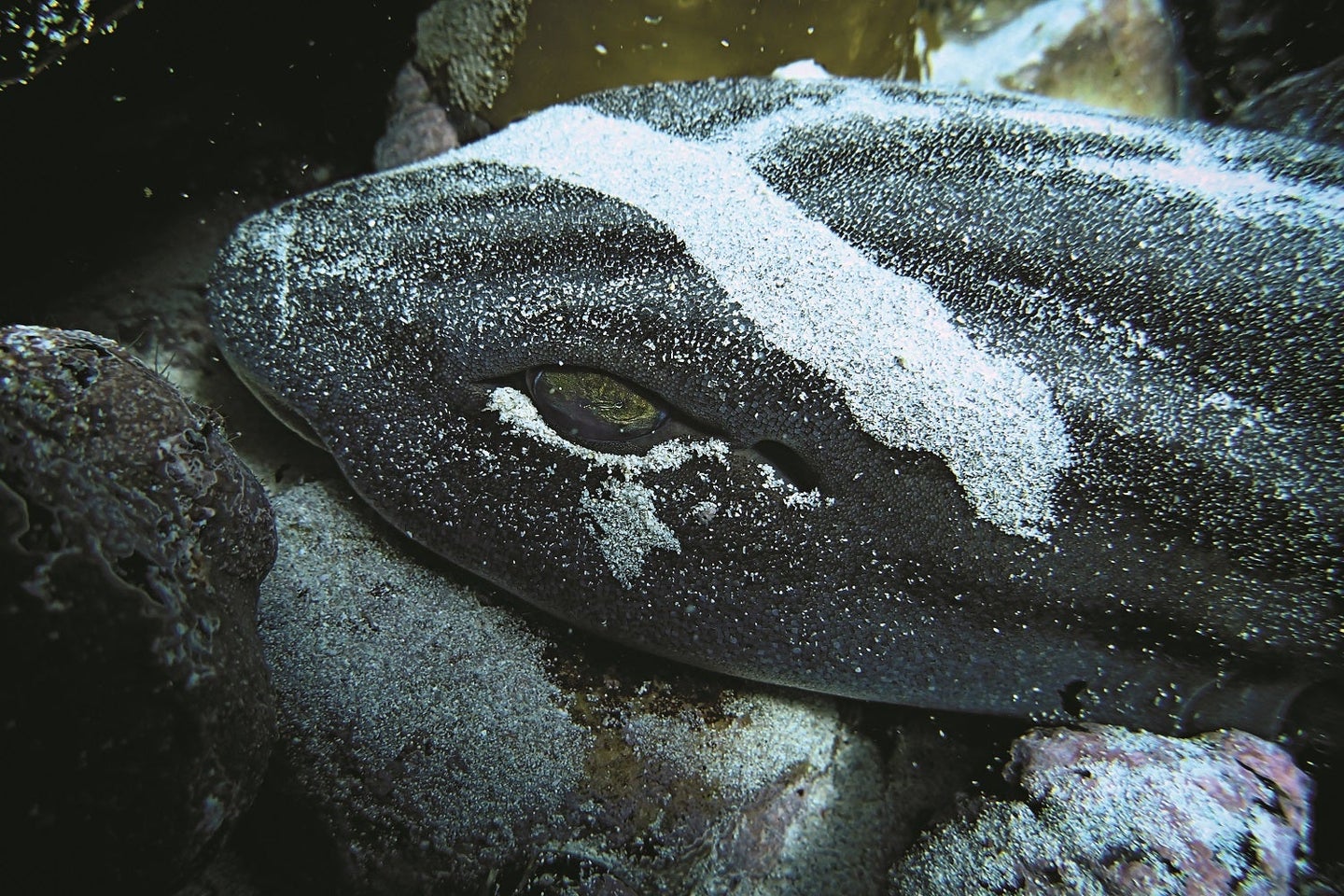 On one dive, I found a striped catshark wedged in a small cave. Curiously, a perfect strip of sand ran across its head. On reviewing a photo of the shark’s head, I realized that the line of sand was in fact the trail of another animal, a mollusk. These mollusks leave slime trails wherever they go, and fine particles of sand from the water column stick to them. A study of the width of the track and the habitat reveals a wealth of information about the mollusk and about the shark—its lack of movement inside the cave and how long it had been sleeping. Craig Foster and Ross Frylinck
SHARE

Excerpt and photographs from UNDERWATER WILD by Craig Foster and Ross Frylinck. Copyright © 2018, 2021 by Quivertree Publications. Reprinted by permission of Mariner Books, an imprint of HarperCollins Publishers LLC. All rights reserved.

At spring low tides we would wade through the shallows, carefully lifting up rocks to see what lay hidden beneath them. Under every rock we found an array of tiny living creatures of incredible variety, including glowing worms, tiny rock suckers, and brightly colored nudibranchs, a type of sea slug. Craig also showed me how animals could be tracked by their egg masses. Using a sea hare as our teacher, he showed me how these squidgy animals that look like luminous slugs were always close to their eggs. Whenever we saw the glowing yellow, spaghetti-like mass of eggs, we would soon find the parent hiding close by.

What was most interesting to me was Craig’s fascination with these seemingly insignificant animals. When I questioned him about it, he told me that he found them more compelling than sharks and whales. For someone who had spent a lot of time with some of the largest predators in the sea, this was a very unusual admission. I was somewhat incredulous and couldn’t help wondering if he really meant what he was saying.

Sitting quietly on the rocks together, we also began to observe very interesting animal behavior in the pools. We watched sea anemones wage slow-motion war, lashing each other with toxic stinging cells. On one occasion we observed a large sea star creeping over a rock, chasing fine top-shell snails. As they reached the edge of the rock, instead of gliding over the edge, the snails jumped into the abyss. They left their trails in the sand and then tumbled through the column of water to finally land safely on the sandy floor. Because the sea star has sticky feet, it couldn’t release itself and make the same jump, so the top-shells won a lead.

Thinking the chase was over, we noticed that one of the top-shells had landed square on its back in the sand, and no amount of “spinning” its upside-down foot would get it upright. The huge sea star moved ominously down the rock, heading for the trapped mollusk. We thought it was game over for the little animal—but then an amazing thing happened: Another, larger top-shell turned around and allowed the trapped animal to grab its shell and hitch a ride to safety.

The sea star realized that it couldn’t outrun the top-shells, so it turned its attention to a nearby stationary urchin, which had covered itself with an empty limpet shell. The sea star’s arm reared up onto the urchin’s back, clearly moving in for the kill. Its sticky feet grabbed the protective shell, pulling it off the urchin’s back and giving the spiny creature vital seconds to escape. The adjacent urchin was not so lucky, having no protective covering. The sea star easily enveloped it. In the astonishing way sea stars feed, it extruded its stomach and slowly began the process of digesting the urchin externally.

These little rock-pool nature “reality shows” had all the drama of a lion kill in slow motion. It was like watching a psychedelic Star Wars movie in a bowl of seawater. After a day of wandering around, watching, playing, and tracking, we were windblown and tired but felt at peace. The key to getting into this state seemed to be the purposeless way in which the day unfolded.

I thought a bit about purposelessness and how play, by its very nature, is aimless. Watching these small creatures search for their next meals, I began to see that nature has a playful side. I started to think that if we all had the same aimless, playful attitude, then we would be more in sync with Craig’s “original design”.