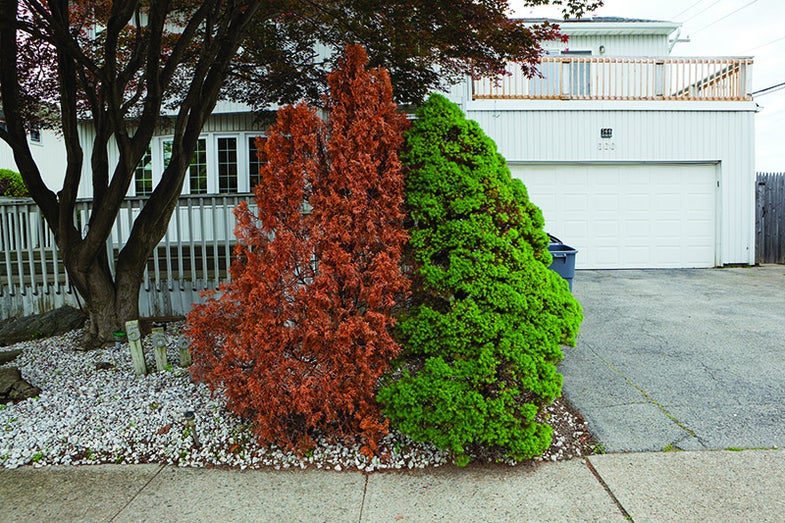 In Long Island’s Five Towns lies the birthplace of American suburbia. With rows upon rows of uniform plots and identical houses, the hamlets—like the neighboring Levittown—provided a safe haven for budding families in the wake of World War II.

But when 2012’s Hurricane Sandy devastated much of New York and New Jersey’s coastline, even the more inland Five Towns were not spared. In her project The Spring After the Storm, Laura Glabman documents the remnant destruction left behind by the now receded ocean.

Many of the homes on the isle remained structurally intact, but when the plants began to bloom that first spring after Sandy, the trees that didn’t survive stood in stark contrast to the bright green foliage of the ones that did. Glabman was determined to capture the intense reminder of loss in and around her hometown of Hewlett, NY.

A fan of Ed Ruscha’s repetitive Americana, Glabman had been photographing the little boxes on Long Island and the Rockaways for a few years. After Sandy, she and her husband drove to the beach, but the devastation was so raw and the residents’ desperation so real that she couldn’t bear to shoot.

But come spring, as she rode her bicycle in a familiar 15-mile loop near her home, she began to notice the deep red foliage of the dead plants in juxtaposition with the bright colors of the spring bloom. Returning with her car and her Canon EOS 5D Mark II, she began to collect reminders of the tempest the community had just weathered. Glabman hopes to publish the series along with other work in a book.

In communities like Hewlett and Levittown, when your house is like your neighbors’, the one place homeowners gets to express their individuality is their lawn. For some, the landscaping represents decades of work. “They developed their own little enclave,” Glabman says. “They designed and grew and planted and trimmed it over the years. When Sandy came in, it destroyed all of that.”