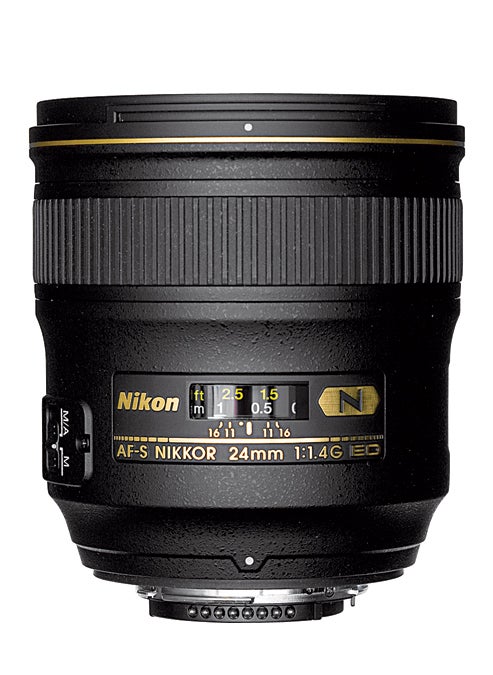 Nikon’s first 24mm f/1.4 lens ever is also its first AF-S wide-angle prime, incorporating the familiar AF-S package: a Silent Wave Motor, instant start/stop autofocus action, and the M/A focusing mode that lets you fine-tune focus manually while in autofocus mode. This full-framer has two ED (Extralow Dispersion) and two aspheric elements, and it appears extremely durable and wellsealed against moisture and dust. It scales up to a 36mm on APS-C bodies such as the D300s. At $2,200 (street), it’s the most expensive non-telephoto Nikkor.

In our field use, autofocus was, like Canon’s comparable 24mm f/1.4L lens, only moderately fast. But its silky action is silent. The amply sized, ribbed, and rubber-clad manual-focus ring is pleasantly free of friction and well-suited to DSLR video. Other pluses: the nonrotating front element, light, petal-style lenshood, and depth-of-field scale.

On our optical bench in the Pop Photo Lab, the lens produced SQF numbers in the mid-Excellent range, indicating superior sharpness and contrast. These results were consistent across discernible softening at either extreme. Its sharpness is a nearmatch to that of Canon’s lessexpensive ($1,700, street) lens, except at minimum aperture, where it consistently provides better diffraction control. Our DxO Analyzer version 3.2 tests found Slight barrel distortion, with light falloff gone from the corners by f/2. The maximum subject magnification came in at 1:4.9, slightly better than the 24mm Canon’s 1:5.3. The close-focusing distance? A very tight 9.25 inches.

This lens is clearly flagship glass—with flagship pricing. You may be tempted instead by the bargain-basement cost of Nikon’s film-era 24mm f/2.8 ($340, street), which is still in the catalog, but the older lens is neither as fast nor high-magnifying (1:9), and lacks internal coatings to suppress flare off the sensor.

Same for the Sigma 24mm f/1.8 . Although its close-focusing (7.25 inches) and magnification (1:2.7) were better than this Nikon’s, it is slower, showed Visible-range distortion, and lacks internal coatings.

Right now, if you want the best wide prime for your Nikon DSLR, this is the one.