Looking to spice up your Instagram feed? Our second edition of 'PopFollows' is live, with 10 more awesome Instagram accounts to check out this month. 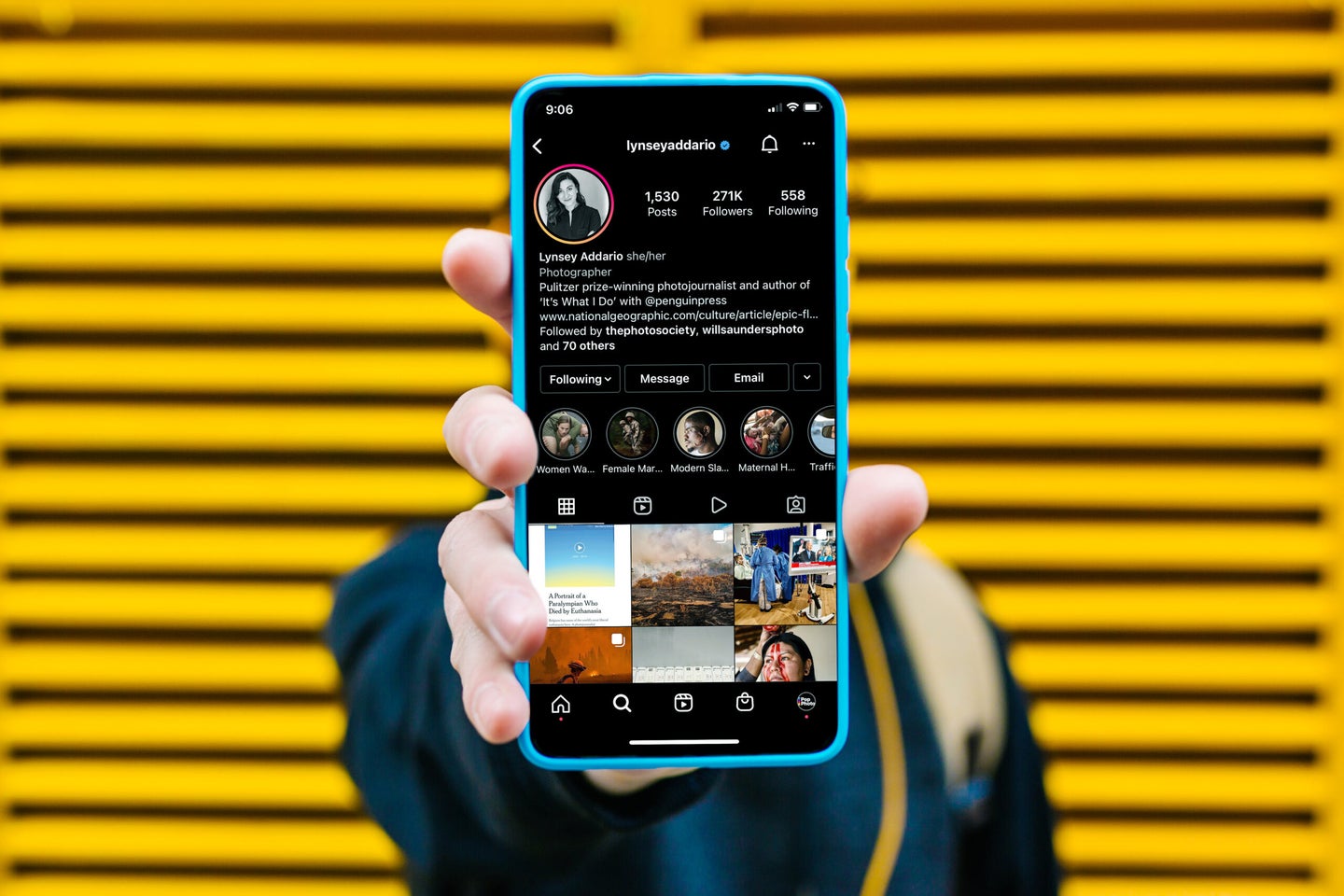 We’re back again with our second installment of PopFollows. This time around, we’ve once again cast a wide net to include a healthy mix of image-makers, photography organizations, and photo educators. These Instagram accounts not only post great work but also provide powerful, informative, and educational captions to go along with their images.

Do you know of a must-see photography account on Instagram? We’re always looking for more photographers to showcase. To get on our radar and be considered for future lists, tag @PopPhotoMag and use the hashtag #PopFollows on a future post.

One of the many things that makes Joe McNally’s Instagram feed such a must for almost any photographer is that McNally’s vast body of work—shot over a span of more than 40 years—encompasses so many photographic genres, including portraiture, photojournalism, documentary, sports, landscapes and cityscapes, street photography, and more. What’s more, because McNally is a gifted teacher, who has taught very popular photography classes on lighting, portraiture, and other topics, some of those lessons show up in his captions. McNally also occasionally will reveal some behind-the-scenes stories about well-known shots. For example, McNally describes working with the martial artist Dan Anderson in an Instagram post as, “going through a precise series of moves parsed out via stroboscopic flash. Combined (with) a triple exposure programmed into the camera, coupled (with) wireless directives to the speedlights. Amazing, disciplined athlete, at the top of his game.”

Dina Litovsky is an award-winning photographer, who has published work in National Geographic, The New York Times Magazine, TIME, New Yorker, and many other publications. In 2020, she also won the Nannen Prize, Germany’s foremost award for documentary photography. What’s intriguing about the work of this Ukraine-born, New York-based editorial photographer is that she tends to avoid the more obvious or sensational types of subject matter. Instead, Litovsky focuses on seemingly more mundane or subtle subjects or moments. Her Instagram profile also includes a link to an excellent resource for documentary photographers—her newsletter, In The Flash—Adventures in the unseen world of photography. For example, one of the entries in her newsletter discusses her “fly-on-the-wall-with-permission” approach to shooting a personal project of the Amish vacationing in Pinecraft, Florida.

One of the many things that make Lynsey Addario such a compelling photojournalist is her ability to take an issue and depict it in an unforgettable way. Oftentimes, it’s because she’s fearlessly focused on the most vulnerable: assault victims, breast-cancer survivors, and refugees—mostly women and children, who have been forced to flee their homes. Most recently, it seems she’s included the Earth as one of those who are most vulnerable, as she’s captured the effects of climate change in photographing the California wildfires and flooding in South Sudan in 2021. Addario also posts calls to action on her feed, as she did when Afghanistan recently fell back to the Taliban, in August of last year. On August 20, 2021, she posted a heart-breaking collection of incredible images of Afghan women studying in school and a graduation photo of several Afghan women, in caps and gowns. In the caption, she writes, “What do Afghan women stand to lose as the Taliban takes control of Afghanistan once again? Perhaps the right to education, from primary level through university across the country…. It would be devastating to take away the gift of knowledge from Afghan girls and women moving forward if the Taliban doesn’t keep its promise of keeping schools open and available to girls and women of all ages.”

The captions on Mark Seliger’s Instagram feed, which accompany his iconic portraits of musicians and celebrities, are often a few paragraphs long, but they are always worth reading. In part, because the captions have a very casual, conversational style, it’s as if you’ve just met him at a coffee shop and he really wants to tell what it was like to meet and work with these iconic figures. Case in point—Seliger recently posted a beautiful double B&W portrait of iconic vocalists Alison Krauss and Robert Plant that he shot for Vanity Fair. In the caption, he writes, “Remember when ‘Raising Sand’ came out? The beauty of two worlds collided with the help of @tboneburnettofficial and it was pure magic,” and then describes meeting the former Led Zep vocalist, “Once I landed in Nashville, I miraculously bumped into @robertplantofficial in my hotel lobby. I was a bit shy to say hello, but he was delightfully charming and set the stage for a relaxed session the following day.”

If you create fine-art photography, then you might already know Mary Virginia Swanson’s name. But if you don’t, then you’ll want to get better acquainted with her and her Instagram feed. That’s because Swanson is one of the most knowledgeable and helpful promoters for up-and-coming photographers. For instance, in the fields of licensing and marketing of fine-art photography, she has been among the most sought-after consultants and educators. She’s also an author, and often lectures and leads workshops. In addition, Swanson frequently serves as a judge on contemporary photography and photobook competitions. What’s great about her feed is that she’ll post informative upcoming lectures, call for applications, dates for portfolio reviews, and more.

In the photography book, “Reflections in a Glass Eye,” which is a wonderful anthology on the work owned by the International Center of Photography (ICP) and published in conjunction with its 25th anniversary, Ellen Handy, a curator for the ICP, begins her essay on the organization’s collection by writing, “Above all, photography is the art of seeing, which offers us ways to view the world through eyes other than our own.” In the next paragraph, she begins, “By their very existence, museum photography collections pose the question, ‘What is photography?’ and each answers it differently.” The ICP’s Instagram account works similarly, by presenting a variety of posts that continue its mission of showcasing outstanding work and educating the public on what great photography is. The posts include news on upcoming exhibitions, great deals and discounts on photography workshops, details on lectures, online talks, and more.

John Keefover, who also answers to the nickname, “Keef,” is based in Duluth, Minnesota, which is also where most of his subject matter is. In image after image, Keefover’s mission is to “show you what makes the North Shore of Lake Superior & the Arrowhead Region so unique.” In doing so, he’s created a powerful portfolio of remarkable images of this region, which you can see on his feed.

Since 1955, this independent, not-for-profit photography foundation, based in Amsterdam, has given out awards each year for the best photojournalism projects. The contest is international, and each year the prizewinning photos are presented in a traveling exhibition. Photojournalists who submit their work compete for the World Press Photo of the Year award, as well as other categories, including Spot News, General News, Daily Life, to name a few. The World Press Photo Instagram account often posts photos and groups of photos from photographers who have won from previous years.

Julia Fullerton-Batten is a unique London-based fine-art photographer, who often creates elaborate, colorful sets with cinematic lighting and populated with characters dressed in period costumes. Her complex, highly textured, and layered images are also generally created as a series of images that are used to tell a particular story or, more recently, to address a particular issue. Her most recent series, “Looking out from within,” addresses the effects of the pandemic on everyday life. Fullerton-Batten’s Instagram feed also includes posts showcasing many of her fine-art images themselves, as well as photos of her exhibitions, magazine interviews, behind-the-scene shots, a few selfies, and more.

Stephen Wilkes is an editorial, commercial, and fine-art photographer, who has been working in New York since the early 1980s. He’s also worked as a documentary film director and a public speaker—in fact, he even has his own Ted Talk. Wilkes’ photography has appeared in, and on the covers of, many leading publications and is featured in many prominent museum collections. But it’s his personal projects that are among his most impressive, including his most recent, “Day to Night” series, which he started in 2009. In these epic cityscapes and landscapes, Wilkes shoots hundreds of images from a fixed camera angle for up to 30 hours to capture the fleeting moments of a scene as light passes in front of his lens over the course of a full day. He then blends various parts of these images into a single photograph. (The book, “Day to Night” was published by TASCHEN as a monograph in 2019.) You can find a great selection of images from his “Day to Night” series, explained with extensive captions, on his Instagram feed.