The sporty one in the X-Series line gets stronger and faster, but not bigger 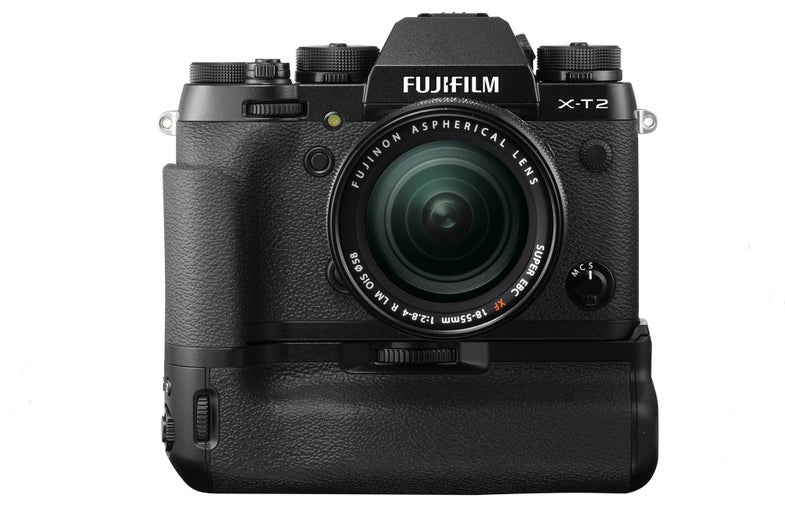 If the Fujifilm camera lineup was a sitcom family, the X-Pro2 would be the artistic child while the new X-T2 would be the athletic one, built to be stronger, faster, and better equipped to deal with the outdoors. The X-T2 pushes the already-successful camera series, concentrating on things that made the X-T1 popular in the first place. It improves autofocus performance, adds megapixels, and increases the overall speed of operation. Plus, it now has dual SD card slots, which is huge for pro photographers.

The heart of the X-T2 is now a 24.3-megapixel, X-Trans CMOS III APS-C sensor without a low-pass filter to help wring out as much detail as possible from a scene. That’s a big jump from the 16.3-megapixel sensor found in the X-T1. According to Fujifilm, the X-T2 offers the “highest performance” in the X-series cameras.

One of the biggest improvements from the X-T1 comes in the form of a revamped autofocus system that uses 325 individual AF points across 91 different zones. The phase detection AF pixels cover approximately 40% of the imaging area, while 65% is equipped for contrast detection AF. The system uses the X-Processor Pro to refocus more frequently than the X-T1, which Fujifilm claims will drastically improve predictive focusing and tracking accuracy. In addition to the speed bump, the X-T2 promises improved focusing on small objects in the frame as well as focusing in dark scenes down to -3 EV. There are a lot of numbers and stats in there, but the overall takeaway is that they have put a serious amount of effort into the AF system in an effort to make this viable as an outdoor camera that can keep up with fast-moving sports, something with which many mirrorless cameras struggle mightily.

Keeping with the sport-friendly features, Fujifilm has taken a serious look at their AF-C algorithm responsible for tracking moving objects with focusing. Users can now tweak the AF to act according to the shooting situation, so it can prioritize locking on to a specific object or concentrate on specific zones. There are five different presets that come pre-programmed with the camera to fit specific shooting types. This is the kind of AF tweaking that you expect to see in high-end DSLRs like the Canon 1D X Mark II.

The electronic viewfinder operates at up to 100 frames per second. The magnification ratio is 0.77x and the lag time is .005 seconds, all of which should sound familiar from the previous model, but the X-T2 promises a drastically reduced EVF blackout time between photos to improve tracking.

Keeping with the “everything is faster” theme of the X-T2, it’s the first camera in the X-Series to shoot 4K video, which is something we can probably expect to see happening more and more as new cameras are announced. One interesting thing about the 4K video in the X-T2 is that it’s compatible with the ACROS film simulation technology, so the video footage can closely match the stills, which is an interesting concept.

The body is made of magnesium alloy and is weather-proofed at 63 different points to make it more resilient in the outdoors. Similarly rugged is the new Vertical Power Booster Grip, which raises the total battery capacity of the X-T2 to three. The grip has the buttons you’d expect, including a shutter button, command dials, and a headphone jack, but it can also be plugged into the wall and act as a charger for two batteries, which seems extremely handy. The grip also enables Boost Mode, which allows for higher fps, shorter lag times, and longer 4K recording limits (30 minutes).

In addition to the grip, Fujifilm is also introducing its new EF-X500 Flash meant to sit in the hot shoe of the X-T2 (or any X-series camera with a hot shoe, for that matter). The EF-X500 has a guide number of 164 (feet, ISO 100), so it’s about what you’d expect from a speed light, and it covers a focal range of 20mm (with the widening panel) to 105mm. The head rotates in most directions, including 90-degrees up, 180-degrees to the right, and 135-degrees to the left. There’s also a clever LED light that can be used to help aid in focusing or as a video light in a pinch. It has native high-speed sync functionality, so it can be used when shooting at any shutter speed.

The X-T2 will be available in September for $1,599 alone or for $1,899 as a kit with the XF18-55mm zoom lens. The EF-X500 Flash will hit stores around the same time with a $449 price tag, which is a bit steep when you consider the recent influx of radio-trigger-equipped flashes available for other camera systems at the moment for a similar price point.

Fujifilm has a history of actually listening to user feedback on its cameras and it seems like that’s the case here as well. They have clearly been very careful to make this camera unique from the others in its line and improve the areas where it excelled in the first place. AF speed has historically been a sticking point for mirrorless in its battle against DSLRs so it will be interesting to see how viable the X-T2 really is as a sports camera. We’ll be bringing you some impressions soon and, as always, a full lab test as soon as possible.