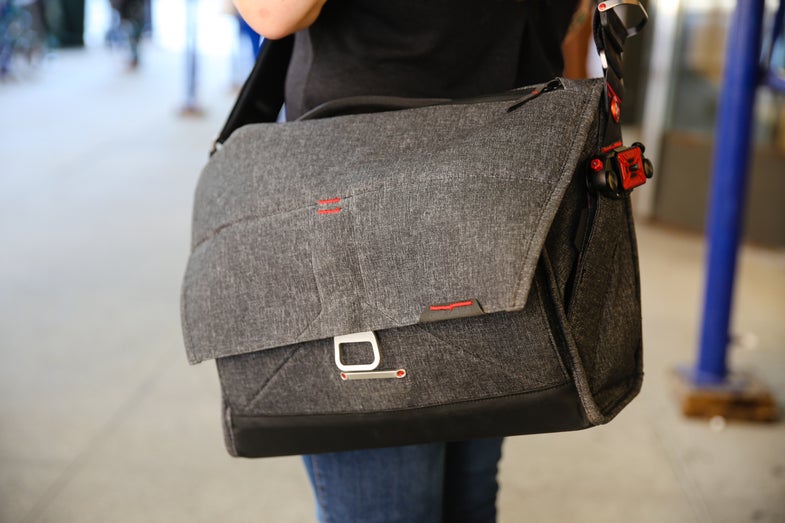 Peak Design, the company known for its Camera Clip that lets you mount a quick release camera holster to any camera bag strap, is wrapping up one of the most successful Kickstarter campaigns we’ve seen for photo gear. Their new take on messenger bags, called the Everyday Messenger, was designed along with photographer Trey Ratcliff and we recently had the chance to try out a preproduction sample.

The first thing you’ll notice is the nice-looking Kodra fabric. The Peak Design Everyday Messenger bag comes in either Charcoal grey or Heritage tan and fabric is treated to make it water repellant. While a lot of messenger bags use Velcro to hold them closed, the Everyday Messenger has something that Peak Design calls the MagLatch. It’s super simple to use and practically closes itself. Just pull the latch down below one of the crossbars on the front of the bag and the weight of the bag itself is usually enough to get the latch to lock in place. Then, pull down on the loop and outward and the bag opens. It’s very fast and much quieter than Velcro.

Inside the Peak Design Everyday Messenger, there are three flexible dividers that can be rearranged as you see fit using a typical Velcro system. Peak calls them FlexFold dividers since you can flip the tops of them up and down. They’re not as thickly padded as the dividers you’ll find in some bags, but they felt padded enough to protect your gear and we had no problems with them in that regard during our time with the bag.

In general, the Everyday Messenger has less padding than you usually see in this style of bag when it’s aimed at photographers. But, to us that ended up feeling like a good thing. Often times, when using a messenger bag with camera gear, I opt for a bag that isn’t photo-specific and using camera and lens wraps to protect the gear.

The problem with heavily padded messenger designs is that the bag ends up being too bulky and won’t flex to wrap around the curvature of your back. The Everyday doesn’t suffer from this problem. Of course, if you put a laptop in it (there’s enough room for up to a 15-inch MacBook pro)), the whole thing becomes more rigid. But otherwise, it’s much more comfortable to carry than most of the more padded types we’ve used.

I fit a lot of gear in the Everyday Messenger. While we were carrying around Sony’s A7R II, I could easily have stepped up to a larger system such as Canon’s EOS 5Ds and brought along equivalent glass while fitting everything comfortably with room to stuff a jacket in as well.

Conveniently, a zipper along the top lets you reach into the main compartment and grab your camera quickly. If that’s not fast enough for you, there are convenient attachment points on the side of the bag so you can attach one of Peak’s Camera Clips or one of their recently announced Capture Lens clip. The Capture Lens has a tube with lens mounts on either side so it can hold two lenses, making it easier to swap them out when you’re out shooting. One of our favorite things about the Everyday is the bottom. It’s made of waterproof rubber and provides a stable support so that the bag stands up when set on the ground or another flat surface.

You can also rearrange the straps so that they can hold the bag to the handle of a rolling suitcase. Also, while our pre-production sample didn’t have this, the final version will let you attach a tripod by passing a leg through a sleeve of the main flap and then placing a silicone band around all three legs to hold it in place. If there’s one thing Peak Design seems to excel at here, it’s coming up with innovative solutions to accommodate the needs of photographers.

There are still a few days left in the Kickstarter campaign, so if you want to get an Everyday Messenger bag, you can get one now for $195. If you wait until after September 20, the price goes up to $250.