Hands-on with a brand new telephoto lens from Olympus 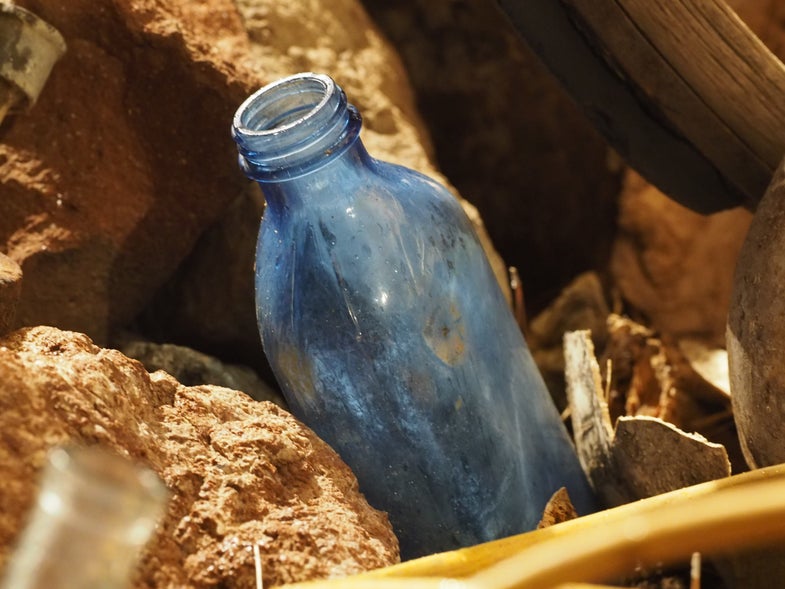 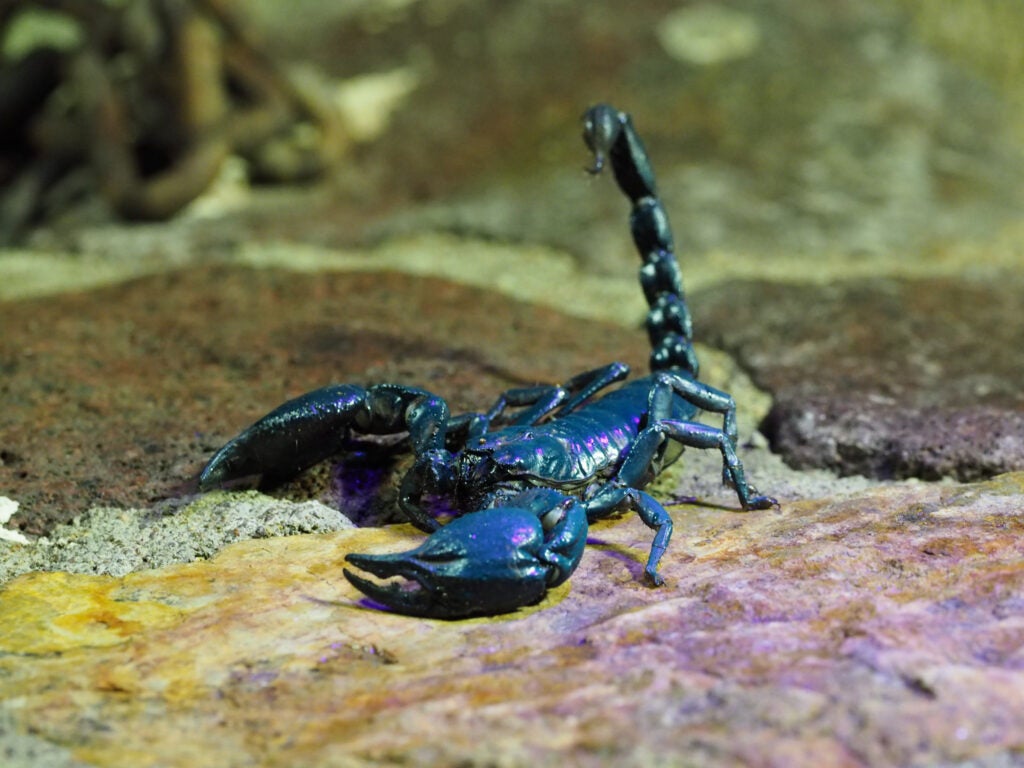 The iridescent purple coloring is from a handheld blacklight the trainer was shining in order to make it stand out against the rocks. 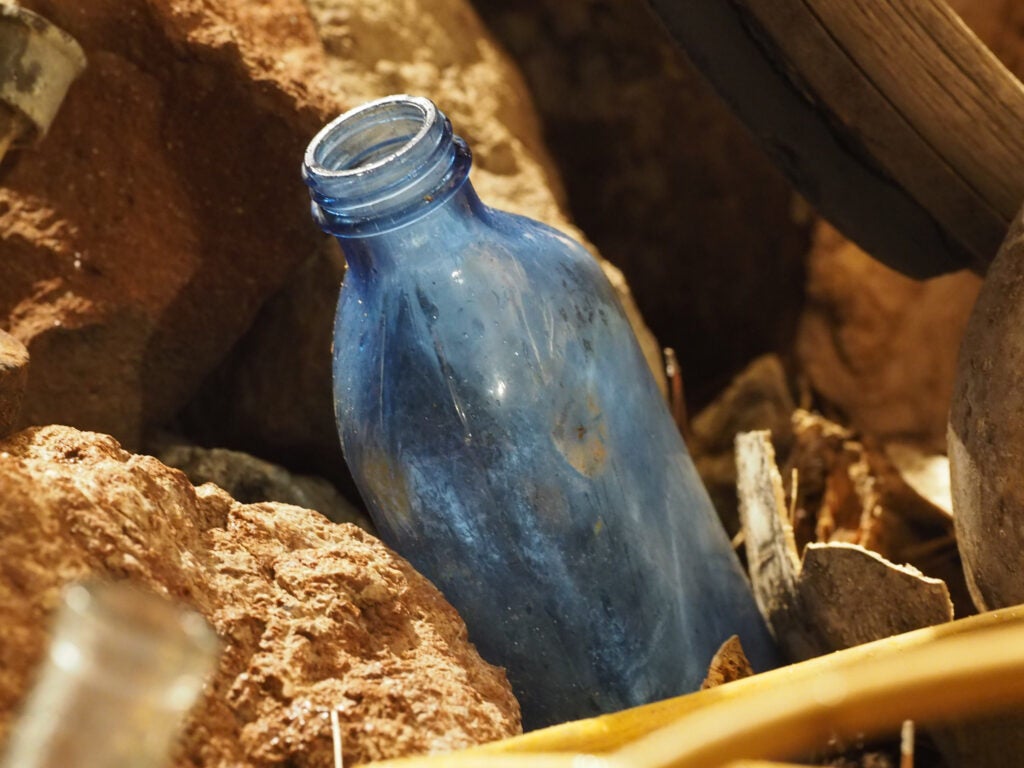 Not the most exciting shot int he world, but I wanted to try out the close focusing (which is very impressive) and also give the IS a real test. This was shot at 1/13th of a second with the effective field of view of a 600mm lens. It’s handheld and it’s really pretty amazing how sharp it is. 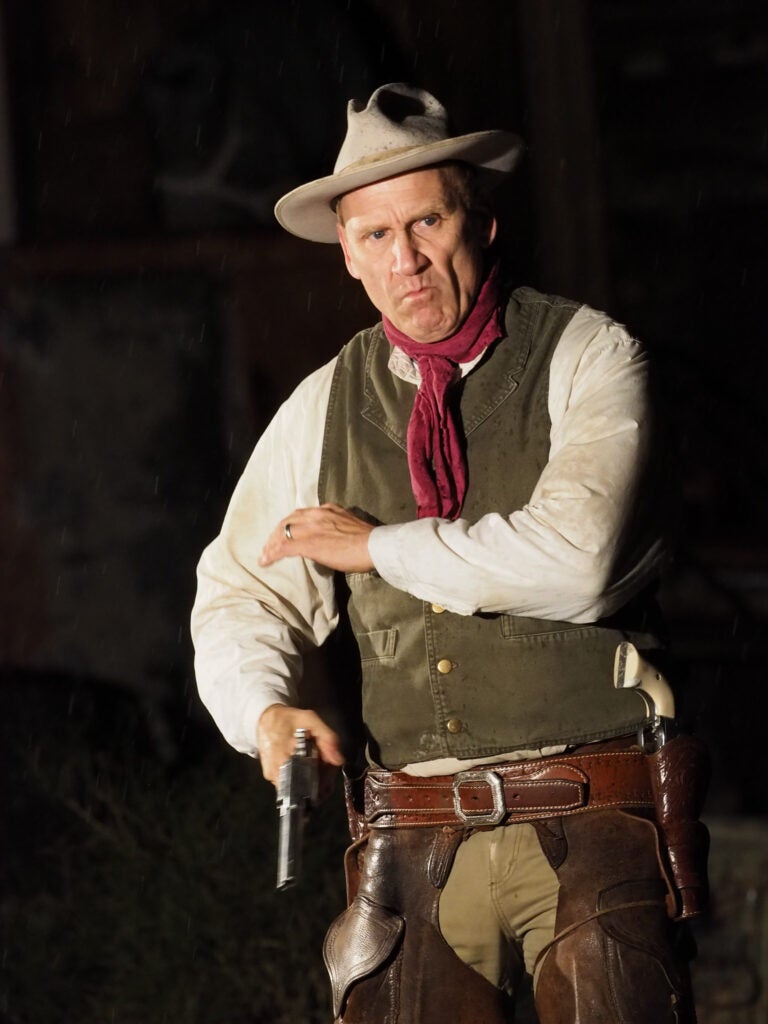 The image looks a little muddy due to the high ISO, but this was an instance where I needed to focus quickly and the lens delivered. Lots of detail, especially in the belt buckle region. 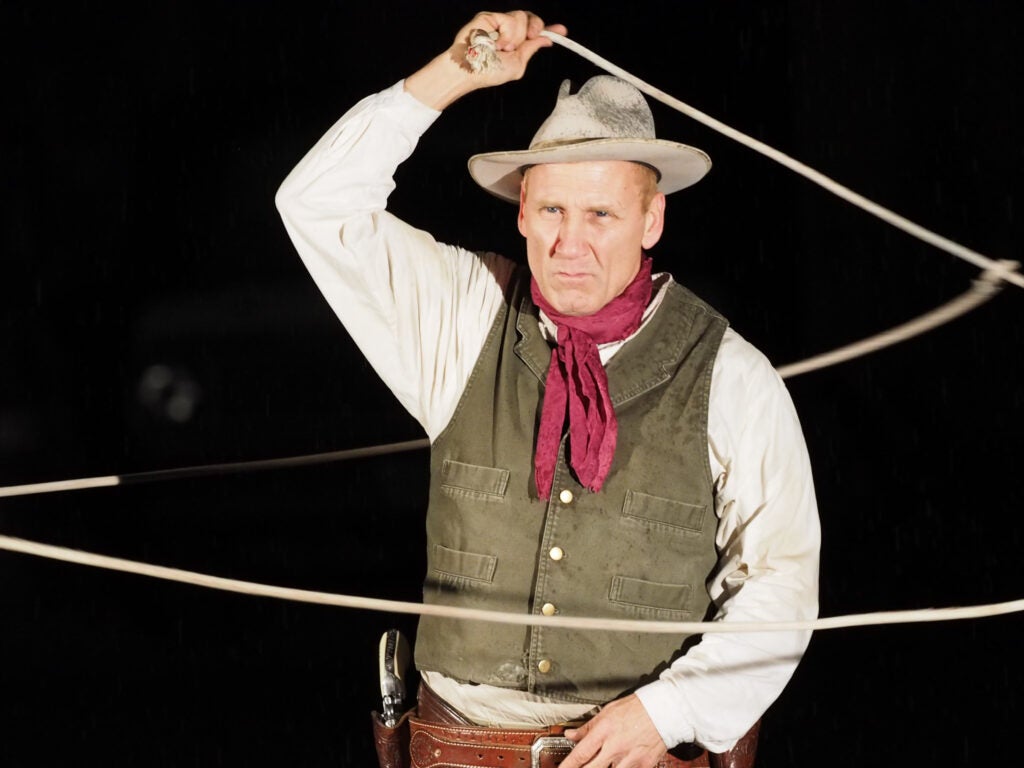 Another action shot with a small amount of blur from camera shake. 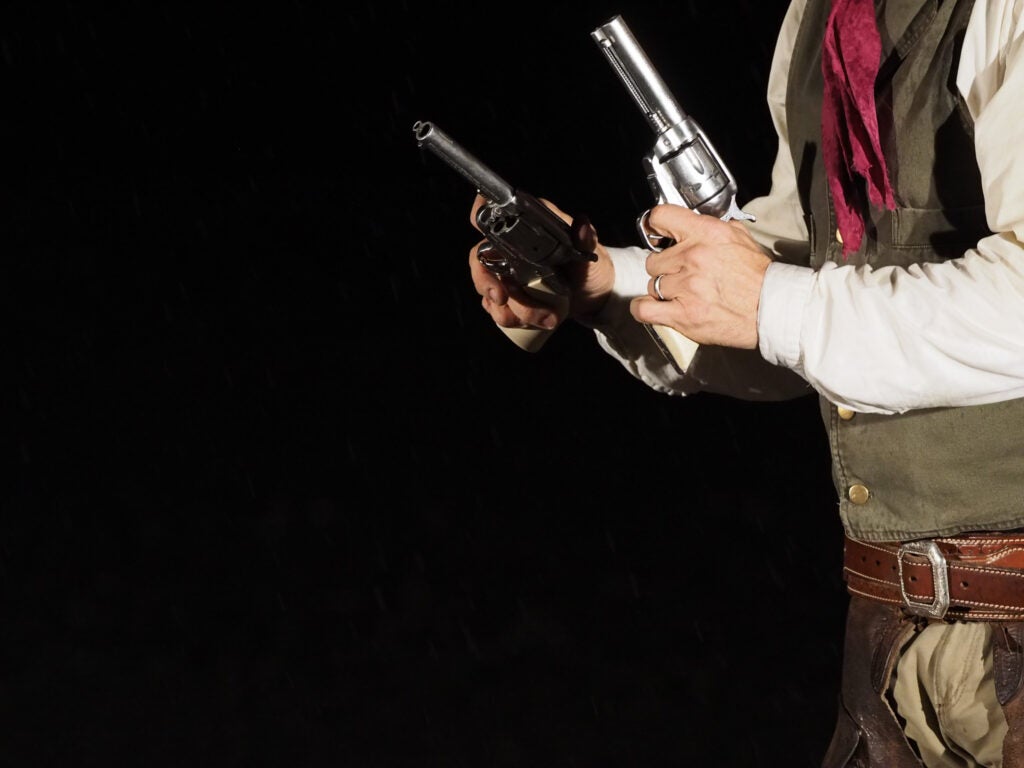 A detail shot rendered rather nicely for the difficult conditions, especially considering the metallic nature of the guns. 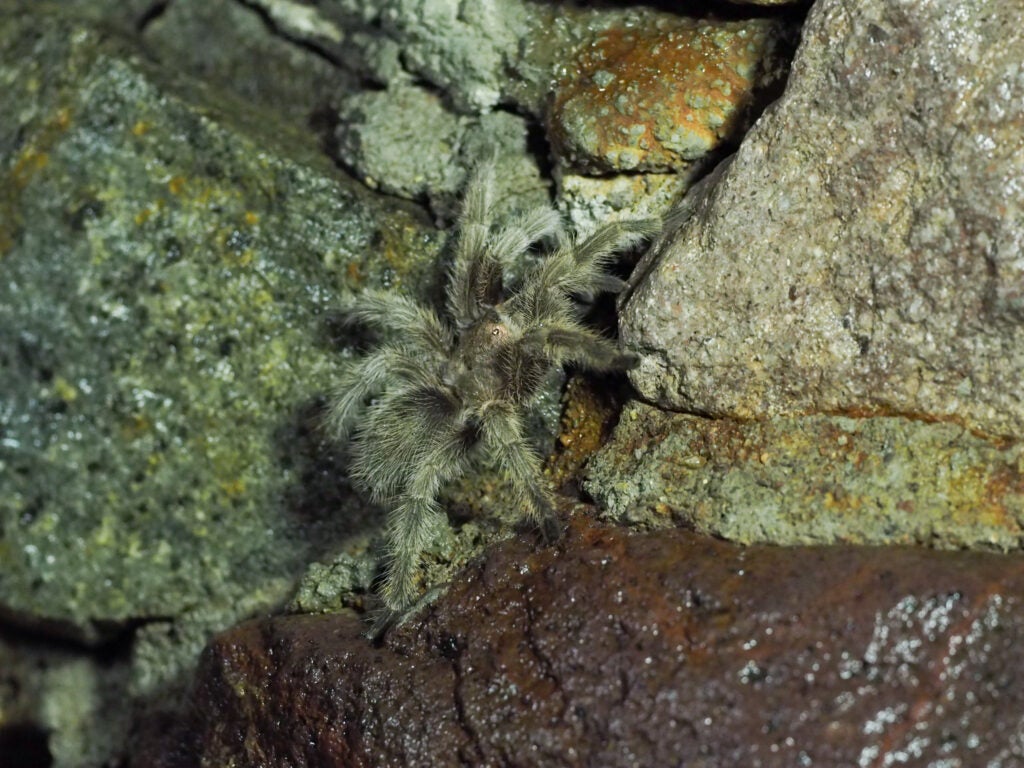 I didn’t make it to 1/600th of a second for the entirety of this shooting experience thanks to the lighting. But, again, the IS does a pretty great job at handheld 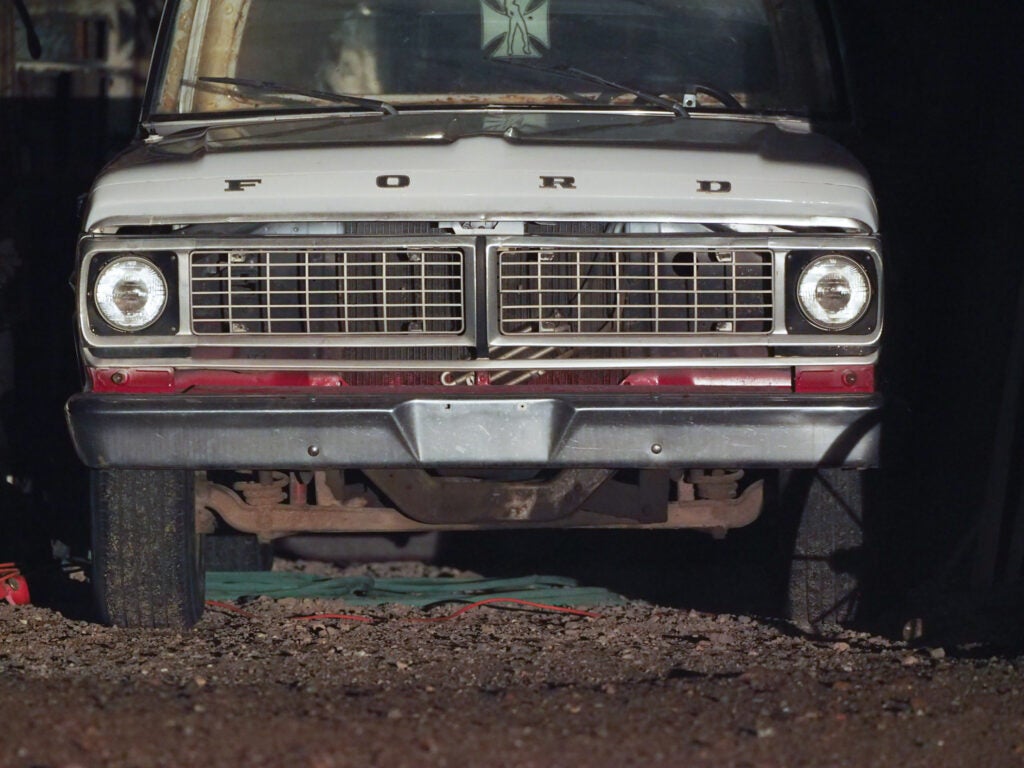 Another example of a shot taken at 1/13th of a second. Lots of sharpness and detail and a very clear lack of chromatic aberration in the high-contrast edges.

I spent most of my time at CES 2016 cooped up in convention centers, press rooms, and hotels-turned-offices, but one night did afford me the chance to head out into the desert for a chance to shoot with Olympus’s new 300mm super telephoto lens.

The shooting conditions were, um, less than optimal with surprisingly cold temperatures, strong winds, and heavy rains. While it wasn’t the most luxurious shoot, it certainly seemed like as good an opportunity as any to test out a new weather-sealed lens that’s meant for the outdoors.

What is it? The lens is—as the name suggests—one of the professional offerings from Olympus. It comes with a $2,499 retail price tag, but it also has aggressive weather-proofing to make it appealing to sports and nature photographers. It has built-in IS, which works with the in-body IS, which allows it to make some rather impressive claims about just how stable it really is (more on this later).

Performance I actually started incorporating a very long lens into my pro kit this summer, so my appreciation for long telephoto lenses like this is currently at an all-time high. The very first thing that you notice when you start using the lens is how light it is. At 2.5 pounds (roughly), it honestly feels a lot like using a 24-70mm lens on a traditional DSLR. Competing full-frame 600mm lenses check in well over seven-pounds (and also cost $11,000+) so that was a very clear advantage.

The autofocus is silent and very snappy. I did notice a little bit of hunting for focus, but that’s a common thing with a focal length this long and the fact that there were particles of rain flying through the air between me and my subjects certainly wasn’t helping in that regard.

The manual focus ring has an intentionally long turning radius so you can make fine adjustments during the focusing process. You engage the manual focus simply by pulling back on the ring and clicking it into a second position, which I have always liked because you don’t have to take your hand out of position or your eye off of the viewfinder to hit a switch.

Optics Evaluating optical performance is the job of our famous testing lab, so I’ll leave the serious evaluation for later. However, first impressions are very good, at least to my eyeballs. We were shooting in some legitimately difficult lighting conditions, so it’s hard to tell if some effects came from rain drops on the lens or from the optics themselves. Overall, though, I was more than satisfied in terms of sharpness and detail resolution.

One thing I did notice was that the bokeh seems a little harsh when high-contrast elements come into play. This is something I’d like to evaluate in a much wider variety of circumstances, but it was something I noticed rather immediately.

Build This is honestly one of the biggest pluses I noticed about the 300mm F/4. The lens hood is an integral part of the lens, sliding out to protect the front element. It took me a minute to figure out how it actually worked, but once it was in place, it feels solid. In fact, the whole package feels really solid. I took in the pouring rain with it mounted to an OM-D E-M1 for about an hour and it didn’t flinch.

Stabilization This probably could have gone into the performance category, but I wanted to single out just how good I found the stabilization to be. Because it has built-in IS, it can work in concert with the IS system that exists at the sensor level in cameras like the OM-D E-M1. Olympus claims up to six stops of shake reduction. The shot above was taken at 1/10th of a second, handheld with an effective 600mm lens. If you zoom in all the way to the pixel level, you can tell it’s not absolutely perfect, but considering I was extremely cold and have shaky hands by nature, it’s pretty darn impressive.

Overall I’m looking forward to spending more time with this lens, but my first impressions are extremely solid. Look for a more thorough review in a future issue of Popular Photography.