Each photo costs roughly $40 but it's so worth it 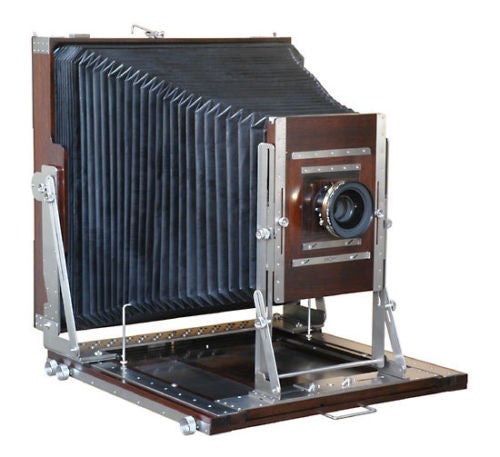 A lot of the cameras and lenses I write about here in these eBay Watch posts are cool, but they’re not meant to be used. They’re collector’s items. This massive 20 x 24-inch custom view camera, however, is begging to be shot.

The auction is currently sitting at around $33,000, which buys you a huge custom-made camera that’s crafted out of aged mahogany wood and titanium. It was commissioned to the Ebony camera company, which was founded by famous Japanese photographer and craftsman, Hiromi Sakanashi.

The auction comes with five film holders (which are very expensive on their own) as well as “a couple Ebony lens boards and lenses” as well as eight boxes of Ilford HP5 film.

That last bit about the film is actually very much worth noting in this case, because a single box of 25 exposures of HP5 in this size will set you back more than $800. That means there’s more than $6,000 retail in film alone as part of the auction.

Large format photography is always very appealing, but the continued cost of actually taking the photos is just so prohibitive. 20 x 24 is also a size that lends itself to large format instant photography, but that’s usually even more expensive, easily going north of $200 for each exposure.

Unless you’re willing to dedicate your life to large format photography, this is probably completely unrealistic, but if you have ever seen a print made from a 20 x 24-inch exposure, you know that this is a whole different level of the photographic process.