You don't need to be a videographer to love a UAV. 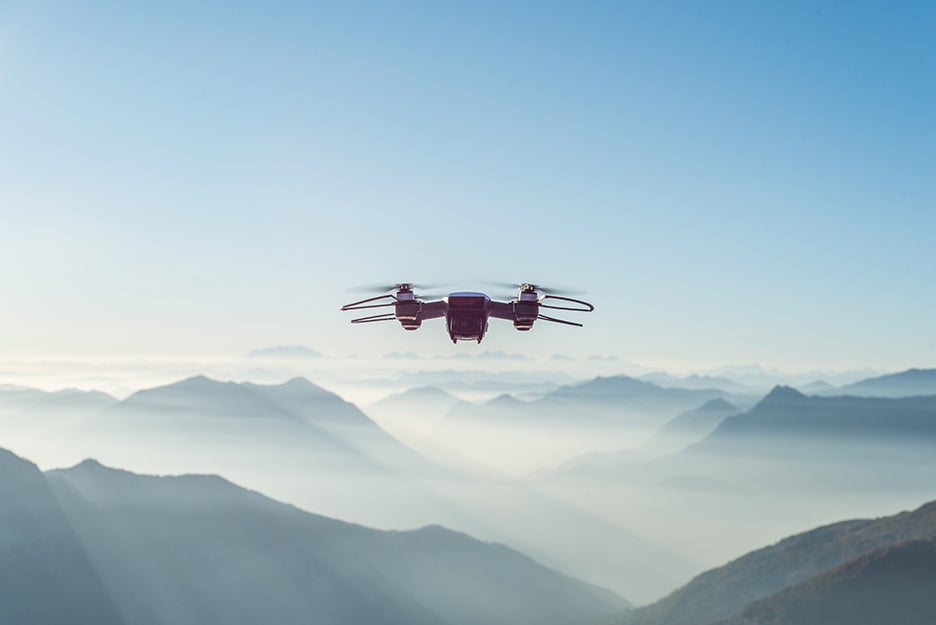 Science fiction promised us that the skies would be a lot more crowded. Between jetpacks, delivery drones, flying cars, and the occasional super hero, the space above our heads should be bustling. But so far, almost none of that has come to fruition. And while that’s bad news for aspiring Iron Man impersonators, it’s great for drone enthusiasts. Here are some great gifts for frequent flyers, ranging from four-rotor rookies to drone Sully Sullenbergers.

Professional drone racing is thrilling to watch. Skilled pilots navigate custom-tuned crafts through narrow passages at high speeds, all while wearing VR headsets for a first-person view. Unfortunately, most of us aren’t cut out for that kind of competition and would immediately crash the drone and yarf from motion sickness. The Mambo FPV, however, gives the experience of aerial racing with much lower stakes. The 7-inch drone streams real-time video to your smartphone, which you can place in the included VR headset adapter to get a pilot’s-eye-view of the terrain. It will fly for 10 minutes on a single battery charge and you can even tweak the steering to match your flying style. Turn on drift mode, which turns off the horizontal stabilization and lets you make wide, sweeping turns while shouting, “Look at me, I’m Tokyo Drifting!” until all your friends leave.

If you have big cash to spend or you just want to seem like a baller to your dad who still isn’t convinced that your job writing jokes about gadgets on the internet is “a life worth living,” then this is the drone to do it. DJI’s pro-grade consumer drone has the best camera in its class thanks to some help from iconic camera brand, Hasselblad. Plus, the whole craft is covered in optical and infrared sensors to help prevent you from crashing it on your maiden flight. Once you get it in the air, a host of automated flying modes that mimic cinematic movie shots can make anything look dramatic, even if you’re just messing with your dog in your yard.

If you want to give a 4K video shooting drone that doesn’t cost as much as a used ’94 Honda Accord, this folding craft has what you need. It has face detection for tracking shots and even voice control for commands like “Go to my ex’s house and see what kind of loser they’re spending the holidays with.” [Note, it won’t really do that. The voice control is more for things like “go up” and “land,” but that would be cool, right?] It can get up to 33 minutes on a single battery charge and has a range of just over 4,900 feet.

Editing 4K video demands a lot of firepower from your computer and space on your hard drive. This handy external storage device uses a solid-state drive inside that’s faster and a lot more durable than a typical external hard drive with a spinning disk inside. You can dump your video straight to the device and edit without taking up space on your laptop at all. It’s IP55 rated, which makes it resistant to rain, splashes, spills, and dust. So, feel free to edit at the coffee shop and force strangers to watch your epic sunset footage without fear that a spilled latte will nuke your files.

The first time I tested a drone, I crashed it into my garage and the propellers exploded so violently that pieces of the shattered plastic stabbed into the wooden siding like a dagger. The moral of the story is that crashes happen and extra rotors are always great to have on-hand. Unfortunately, each model has its own specific type that it requires, but if you can find out what kind of flying machine your lucky recipient has, it’s a useful and thoughtful gift.

Here are links to a few of the most popular models:

If you want to be a hilarious jerk about it, get your airborne buddy a pair of those old-timey aviation goggles like the ones Snoopy wears when he’s pretending his dog house is a fighter plane. If you want to be cool about it, get a pair of polarized sunglasses. The polarization will help your pilot pal keep an eye on their craft as it cuts through the atmosphere, while reducing glare and eye strain. The full UV protection will keep harmful rays from cooking their eyeballs as they gaze skyward. Plus, these are aviator-style, which is a fun play on words because, you know, flying.

Memory cards typically fall into the stocking stuffer category because they’re small, but this is no Pez dispenser or weird squishy foam fruit that kids seem to love for some reason. This is a serious piece of drone photography equipment. These high-speed cards are fast enough to pull down full-resolution 4K video to make the most of a drone’s camera. The amount of footage that will fit on a specific card will vary, but go big. Santa would.

A typical portable power brick doesn’t have enough juice or the right connections to charge a drone. Mophie’s paperback-book-sized battery backup does. It has a full-fledged AC outlet for charging whatever needs juice, including a power-hungry flying machine. The massive 19,500mAh battery has enough juice for more than a full battery charge on most crafts. Plus, it has typical USB and USB-C ports to charge other devices, including a MacBook Air or Pro laptop, so you can edit in the field. You can use a tree stump as a chair and a really big leaf as your desk. You can use a shrub as a shrub, just like in your real office.

The whirr of a drone’s propellers is about as pleasant to listen to as taking a power grinder to a wasp’s nest. Drown out the drone with this tiny-but-powerful Bluetooth speaker. It has a 10-hour battery and pumps a surprising amount of volume when you consider that it’s smaller than a good grapefruit. It’s totally waterproof, and attaches to a bag with a tough fabric loop for easy transport. It’s perfect for making Apocalypse Now allusions by jamming “Ride of the Valkyries” and shouting, “We’ll come in low out of the rising sun, and about a mile out we’ll put on the music.”

Interested in talking about deals and gadgets? Request to join our exclusive Facebook group. With all our product stories, the goal is simple: more information about the stuff you’re thinking about buying. We may sometimes get a cut from a purchase, but if something shows up on one of our pages, it’s because we like it. Period.