It doesn't have the same range as pro models, but it's a lot of drone in a very small package. 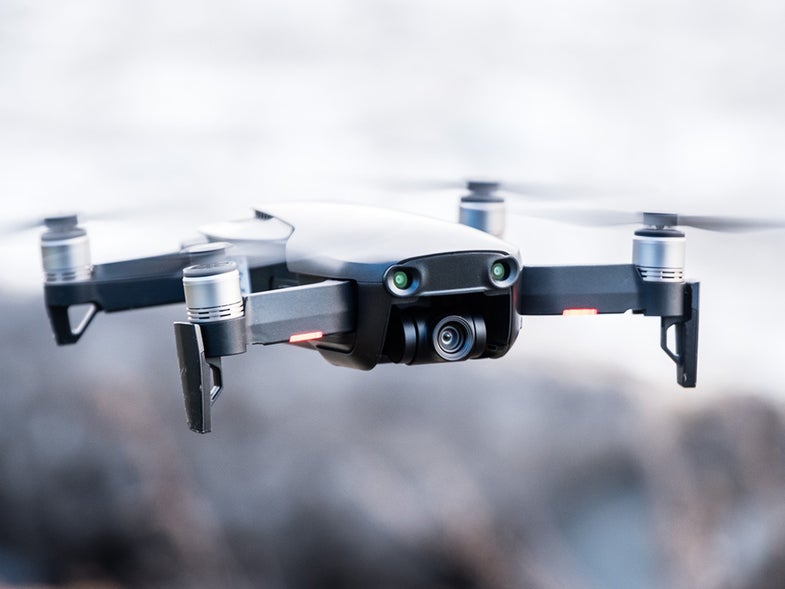 CES 2018 was conspicuously devoid of new flying machines from drone-making behemoth DJI. Just a few weeks later, however, the company announced one of its most interesting crafts to date. The Mavic Air is the middle child in the DJI lineup, but its water-bottle-sized body and a bevy of high-end features make it one of the company’s most compelling offerings.

With a $800 base price, it sits comfortably between the adorable, consumer-oriented, $500 Spark and the more-powerful, $1000 Mavic Pro, which was introduced back in 2016. Despite how close all these models are in price, they’re quite different, so you have some considering to do before you make your pick.

By now, the form factor of a drone like this should be pretty familiar—four blades, a couple antennas, a whole pile of sensors, and a controller that links up with your phone to command the whole thing.

The Air uses a collapsible form factor like the 1.6-pound Mavic Pro, but weighs just 15-ounces and is about the size of three or four iPhone 8 Plus devices stacked on top of one another. It’s seriously portable, especially if you’re already planning on carrying a camera bag with you.

Unlike the Mavic Pro, however, the Air takes its commands via Wi-Fi instead of radio frequency. This may be something many consumers wouldn’t even notice without looking at the spec sheet, but it does have an effect on the flight. Syncing it up, for instance, can be a little finicky if you’re in the vicinity of other familiar Wi-Fi networks. I found that the connection was rock solid if I waited for the drone and app to ready themselves completely before syncing, but when I got impatient, I’d lose connection from time to time.

The drone creates its own Wi-Fi connection, which is broadcasts from two fold-out antennas that double as its landing gear. Because it uses WiFi instead of radio, it can’t touch the four-mile range of the Pro—the Air maxes out around 2.5 miles. While that may matter for some more advanced users, it’s entirely possible that more casual pilots won’t get that far away anyway, especially when you consider the fact that the drone has to stay in your line of sight when you’re flying it. 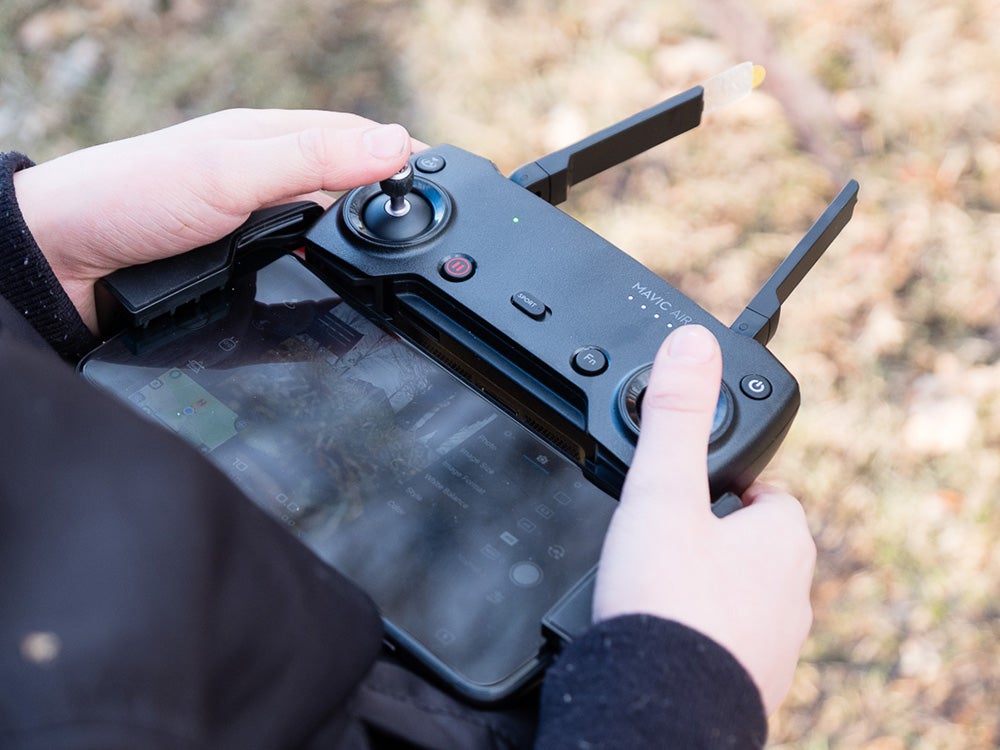 The included controller doesn’t have a screen, but it has a direct, wired connection to your smartphone, as well as clamps to hold it in place.

You can control the drone with your phone, but it comes with a dedicated controller, which provides a much better experience and enhanced features, like a faster top speed. The controller for the Air is very similar to the one that comes with the Mavic Pro, sporting a pair of sticks, a dial to change the angle of the camera, and buttons to trigger the camera.

It doesn’t have a built-in display, however, to give you details about the craft. It’s not a deal-breaker, but having all that info at a glance and not on the camera preview screen is nice. One thing I actually prefer about the Air controller is that the joysticks unscrew and store inside the controller when they’re not in use, so you don’t have to worry as much about snapping them during transit. They’re small, so losing them isn’t out of the question, but DJI provides an extra set as a backup.

Like the Mavic Pro, the Air can record a detailed log of its take-off point. If you leave this option on, the drone immediately goes up to 20 feet and takes images of the spot from which it took off. This helps it find its way to its exact home later on.

You have a couple options when you actually get the drone up into the sky. Beginner mode limits the speed and the range of the craft, but that’s really only useful if you’re a total beginner or you want to let someone else—like maybe a child—fly it without risking catastrophe.

Normal mode lets you push the drone out to its full range, while sport mode, which requires the controller, pushes the top speed all the way up to 42.5 miles per hour. Sport mode feels very fast, especially with such a little craft. Interestingly, you also get the opposite of sport mode called cinematic mode, which slows down the drone and tapers the speed with which it starts and stops. This is to make the video footage look smoother, even if your thumb work isn’t on par with a bigtime cinematographer.

One advantage the Air has over its bigger sibling is the fact that it has an increased number of sensors—as well as a tweaked object avoidance algorithm—to prevent it from crashing into things like trees, people (as you can see above), or the cubicles of your co-workers who are busy trying to make a magazine and really wish you would “take that stupid thing outside already.”

The Air has cameras on its backside to help keep it from backing up into objects, which is something the Mavic Pro lacks. The object avoidance system that guides the craft has also improved in the air. Now, instead of finding an obstacle and hovering in front of it, the drone references a 3D map created by its onboard sensors to find a path around whatever’s in its way.

This feature takes some getting used to, especially if you’re already really accustomed to the old stop-and-hover method of avoiding a crash. Ultimately, however, I found it to be very effective. The only time we really managed to crash it was in the very tight quarters of our office, where it didn’t have GPS and the tight tunnels created by walls and cubicles played havoc with the air displacement.

The battery life claims 21 minutes of flight time per charge without much wind (gusty conditions require the craft to work harder in order to stay airborn and stable), compared to 29 minutes in the Mavic Pro. In my real world experience, I got roughly 15-17 minutes before the Air started bugging me with the low-battery warning. One particularly windy flight gave me just 13 minutes before it wanted to head home. Still, I found that amount of flight time totally fine for a craft of this size, but I absolutely recommend getting some extra batteries if you buy one.

You can capture 4K footage at 24 or 30 fps using the Air’s built-in camera. It would have been nice to have 60 fps at 4K, but I definitely wouldn’t expect it at a craft with this price tag. The footage looks rather excellent in bright conditions, but starts to suffer some digital noise when things get a little darker. If you’re looking at the footage on a phone, it’s typically fine, but if you blow it up to a big screen, you can start to see it. Still, the quality is excellent for a tiny camera like this.

The camera is clearly doing some image processing on the back end to try to optimize the picture (pretty much all smartphone cameras do this), and it can get bit carried away. Sometimes it adds a little too much sharpening and saturation to make things look a little unrealistic and jagged around the edges.

The gimbal, which is the system that helps keep the camera steady even as the drone moves around, is one of the most impressive parts of the whole package. DJI has a track record for making excellent stabilizers and this is no exception. When you take off and hover, you might have to wiggle the controller sticks around a little to tell if you’re looking at a static image or an actual video feet. Impressive.

While I’ve spent a lot of time comparing the Air to its bigger sibling, it also pulls some features from the consumer-oriented Spark. You can use hand gestures to control the air to perform simple operations like moving forward and backwards, or even taking a selfie. I liked this feature in the Spark and it’s very noticeably improved here. The drone follows your commands with a lot less lag and I didn’t feel like I needed to wave my arms around like a mad orchestra conductor to get it to go where I want.

I still don’t think flying a drone with gestures is very efficient or even really that useful, but it’s certainly a lot better than it was and it makes a really cool trick to impress people.

The automatic shooting modes from the Spark also made their way into the air, with a few new options added as well. The system is based on the Air’s ability to track an object. This used to require actually drawing a box around something on the screen, which worked sometimes, but wasn’t totally reliable. The new version, however, automatically detects subjects and locks on, letting you select something to track by simply tapping on it. It’s much more intuitive and fails less often.

The pre-baked maneuvers include a rocket-mode, which shoots it up into the sky, as well as a move that circles a subject while keeping the camera trained on it. You still need a serious amount of open space to make these work—consider a sporting field or some other kind of area with nothing to smash into—but they look impressive when they work.

Now comes the tricky part. There’s a lot to like about the DJI Mavic Air, but it fits a specific type of flyer. The basic functions of the non-folding Spark can probably satisfy most needs of a truly casual pilot for half the price of the Air.

On the other hand, more advanced pros will probably appreciate the extended flight time and longer range of the Mavic Pro.

That leaves the Mavic Air between the two. At the announcement event, DJI used photographer Chris Burkhard as an example of a the target demographic and that seems very apt. If your primary goal is drone footage, the Pro is better, but this is great as an extra tool to have in the bag. It folds down in such a way that it’s actually easier to tote around than the non-folding Spark and you can sneak it into a camera bag a lot easier than you can a Pro.

If you do decide to buy this drone, you should seriously consider getting the “Fly More” package, which costs $1,000, but comes with two extra batteries, a bag, extra blades, and a fold-out charger that can juice up to four batteries at a time.

Ultimately, this drone further solidifies DJI’s title as king of the consumer drones. With GoPro totally dropping out of the drone game earlier this year, and Yuneec skimping on any new products at this level, it’s clear that DJI isn’t giving up the quadcopter crow any time soon.