Tips From a Pro: Shooting Swimming from Underwater 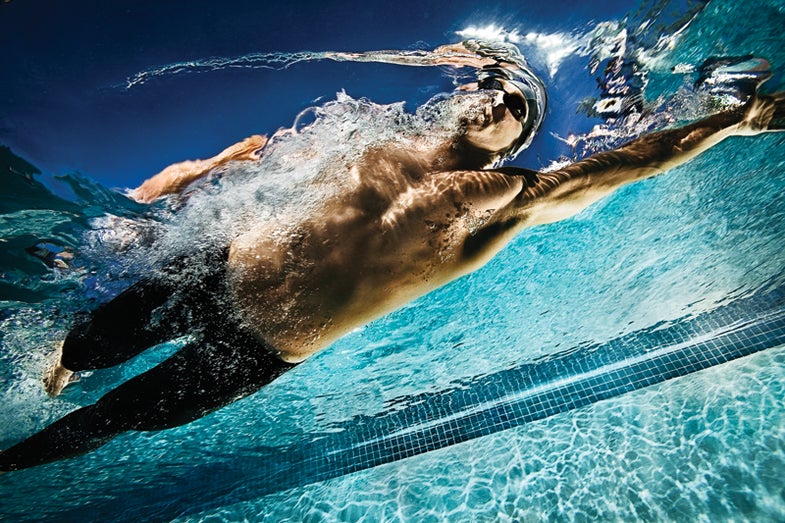 Compared with basketball or football, and their constant possibilities for visual drama, swimming doesn’t really lend itself to photography from the sidelines. The athletes are submerged, usually face down, and all you see are arms and legs in a pool of splashing water. The best place to shoot this sport from is underwater, and that is where the fun begins for Portland, OR, photographer Marcus Swanson.

Swanson, who works extensively with Nike and has 20 years of scuba diving experience, wanted to illustrate the power and physique of Olympic gold-medal-winning swimmer Jason Lezak for an ad campaign. “He’s a tall man, with long, powerful arms, and he really stretches out to grab the water and pull through his stroke,” Swanson says. “I wanted to photograph him at the moment he was perfectly outstretched, and I wanted something dramatic. The trouble with shooting up from the deep is that the subject is backlit—not the best scenario for capturing detail. So instead I treated the pool as if it were a studio, because the same lighting principles apply,” says Swanson.

Shooting through water is more difficult than shooting in a studio because light quickly diminishes the deeper it goes. Swanson’s solution: reflectors placed immediately below the swimmer. (He didn’t use underwater strobes because their recycle times are too long.) Just as in a studio, Swanson anchored his stands on the floor of the pool with sandbags. He extended them (with reflectors attached) 10 feet up toward the swimmer.

Swanson lit the athlete with unusual Speedotron105 Quad-Tube strobe heads aimed down at the reflectors from poolside. Each of the four light tubes (per head) had its own power pack, fired with PocketWizard radio receivers in their speed cycle mode.

Want to try this yourself? Swanson has two tips: Hold your breath while shooting to prevent bubbles from obstructing the view, and remember that electricity and water don’t mix, so be careful!