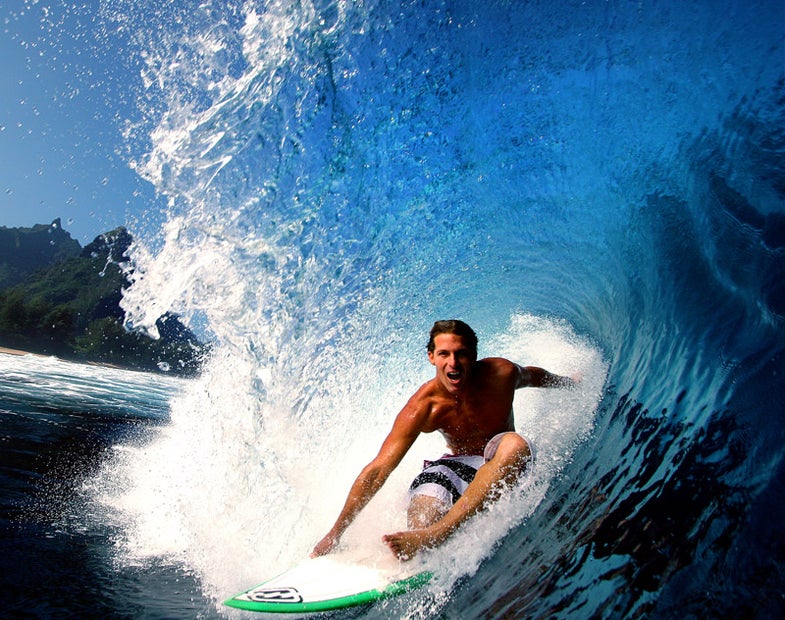 This is the late, three time world surfing champion Andy Irons at his home beach. He is by far the most exciting surfer I have ever photographed, as he surfed with such confidence and skill, making my job easy. Shot with a Canon 40D and Canon 10-22mm lens. Really miss him, and wish he was still dominating the sport. Mike Coots
SHARE

Describe the shark attack.
I was out with friends at a surf spot. The shark attacked me from underneath, latched onto my legs, and started swinging back and forth. I stuck my right hand in its mouth—with my left hand, I punched it in the head. It let go, sunk back underwater, and disappeared. I looked over my shoulder and saw my leg completely sliced off—a surgeon couldn’t have done a better job. When I came to, it was a day later. But as soon as I got the stitches and staples taken out of my other leg—I almost lost that leg, too—I was back surfing.

How did the shark bite lead you to photography?
A lot of magazines and newspapers were coming over to do stories on me. John Russell was one of them, and I just hit it off with him. When he had a shoot on Kauai for Sports Illustrated KIDS, he called: “You’re the only one I know on the island. Would you like to come along and assist me?” He became my mentor. I spent a lot of time at the beach shooting my friends (who were all pro surfers), often shooting them wearing clothes they got from their sponsors. I started submitting stuff to the sponsors, and it grew from there. Now I do work for Quiksilver’s underwear line and a lot of environmental portraiture in Los Angeles.

What were your first shoots like?
To be honest, I was trying to do swimsuits; bikinis and beach-oriented fashion. I was lucky enough that John Russell brought me on some pretty big advertising shoots. He was not a traditional “I’m the photographer, you’re the assistant,” kind of guy. He did a shoot with Andre Agassi in Vegas, and he let me bring along my camera and shoot right alongside with him the entire time. I was really lucky that I got to be totally hands on, and when it came time to select the final images, my photos were in the mix. I was really fortunate that I got to jump in head first on some great shoots, right from the beginning.

Did photography help you reconnect with the ocean?
I was born and raised in Hawaii. The ocean is everything to everybody here. I saw these different elements unfolding—the moments when the light hits the water a certain way, or the way the waves break against this stunning backdrop. I wished I could tell the stories to my parents or my friends who weren’t in the ocean. I fell in love with telling that story.

In the water, what does it take to get the perfect shot?
For high-impact action surf stuff, good talent: Great surfers, before I go out and surf with them, know to ask what equipment I’m using, whether it’s a fisheye or a wide-angle or a long lens, and know exactly where to set themselves up for that maneuver. More than good light or good waves, that’s the best thing to have—good talent.

Do you ever feel fear?
Of a shark attacking me, not at all. The odds of that happening again are so slim. It’s more about the physical limitations that I have. I swim with my prosthetic on, and I only have one swim fin. My prosthetic isn’t quite an anchor, but it doesn’t help at all. It drags water. It’s harder for me to get in huge surf with crazy currents, but it’s forced me to read the ocean better and visualize where it’ll set me up and where I’m going to come in, whether it’s rocky cliffs or sharp reefs—the best entry and exit points. And I’m still trying to tinker around with my leg and different ways of putting up swim fins along my prosthetic to give me a little advantage. It’s kind of a learning process.

Talk about your gear.
Waves are really hollow—you want to try and get a shot of the surfer inside the curl. Canon’s 15mm f/2.8 fisheye is the best; it makes really tight little barrel shots seem bigger. It also totally exaggerates your distance—if you’re 4 feet away, you’re too far. If the waves aren’t perfect and it’s a little mushier, I use a longer lens and sit on the shoulder to get a tight action shot. I shoot a lot off a personal watercraft (PWC), and I keep a 70–200mm f/2.8L Canon IS in a Pelican case. I use a Canon EOS 5D Mark II for lifestyle work; for action, I use an EOS-1D Mark IIn in an Essex Housing—they have fewer wingnuts to screw and unscrew when I’m changing lenses or settings. There’s a focus lock that helps a lot, because in the water you go up and down, and the focus goes all over the place.

How is shooting on a PWC?
The most crucial thing is definitely keeping an eye on the incoming surf. Not the guy riding the wave, but the wave that’s going to hit the PWC. When you go to shoot, you’re looking through the camera, not at where the wave is coming at you. You take your eye off the ocean for a second to shoot, always aware of what’s behind and around you. It’s a juggling act. I’ve had a top surfer take off on a beautiful wave that I know is going to be an amazing shot, but there’s a small side wave about to hit the PWC, and I can’t take it because I need to maneuver around the waves. Safety first.

You also shoot from helicopters. What challenges does that present?
Communication with the pilot is the key. By the time he does his circle, you need to be in the prime spot for when the surfer rides the wave. Once you get it down, you can pretty much just go where the light is and get crazy unique angles. You’re able to visualize what the currents are doing—it’s super cool. But whatever you’re trying to accomplish, you want to make sure that it’s all choreographed before you go up, because it’s so loud that there’s absolutely no communication once you’re up there.

I usually use two bodies: I’ll have a wider lens in one and a longer (70-200mm f/2.8L) lens on the other—it’s too dangerous to go into your backpack to switch lenses. I try to get really big memory cards so I don’t have to switch, because supposedly even a little card can bring down a helicopter if it hits the rotor.

What got you into conservation?
I got a phone call three years ago from the Pew Environment Group. I was absolutely blown away by what’s going on, with like 70 million sharks a year dying for shark-fin soup. They thought using shark-attack survivors would be a good way to talk to Congress and the U.N. Sure enough, we were able to go to Washington, D.C. and New York City and tell them about what’s going on in the oceans. It worked—we were able to get a shark ban in Hawaii, California, Washington, and New York City.

How can photography help conservation efforts?
I think it’s probably the single biggest thing that can help it. It visualizes this horror that’s happening to sharks and lets the average person at the dinner table or watching the news or reading a magazine see what’s going on and maybe take action. After being finned, they swim in little circles, and two days later they’re on the bottom of the ocean floor, dead. It’s just the worst way to die. Sharks are apex predators—they hold the whole ocean in check. If sharks go, then everything will start to fall out of whack.

Where would you be if the attack had never happened?
I would probably be working at a restaurant, surfing—just trying to get by, like a lot of people in Hawaii. Getting bit by a shark has been a blessing in my life, 100 percent. I’ve been able to to meet a lot of wonderful people and experience a lot of really cool things, and it’s helped my career immensely. I feel really fortunate