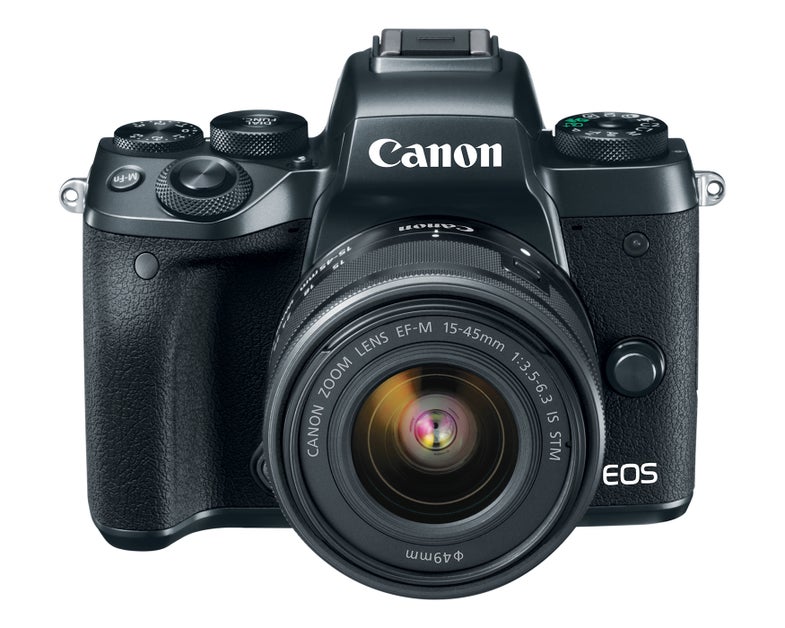 Until now, the EOS M3 sat at the top of Canon’s mirrorless camera hierarchy. Now, as Photokina 2016 is almost upon us, the new EOS M5 is here to take the flagship spot in Canon’s M-series.

The heart of the camera comes with a lot of Canon’s most recent technology, including a 24.2-megapixel APS-C CMOS sensor that’s equipped for Dual Pixel autofocus. The sensor is coupled with the DIGIC 7 processor, which gives it a max ISO of 25,600 and a max burst rate of up to seven fps (or nine fps if you don’t need focus tracking).

The EOS M5 takes a more DSLR-style approach in terms of form factor, due in large part to the built-in electronic viewfinder, which boasts a total resolution of approximately 2,360,000 dots. The back of the camera has a 3.2-inch tilting (85-degrees up, 180-degrees down) LCD touchscreen with 1,620,000 dots of resolution.

Even though the camera is shaped vaguely like a Canon DSLR, it does have a few features we haven’t yet seen from its mirror-toting bodies. The EOS M5 has a 5-axis digital image stabilization system for shooting video that can work in concert with compatible IS-equipped lens for smoother captures. It will work with non-IS lenses as well. The EOS M5 also does focus peaking, which is an extremely useful feature and can be used through the electronic viewfinder.

As you might expect, the EOS M5 has built-in Wifi as well as NFC so it can transfer images to a smart device using the designated app. In terms of video, it maxes out at 60 fps at 1080p resolution, which falls a bit short of the 4K standard we’re starting to expect out of mirrorless cameras at this point, but the mid-level price point makes sense with that omission.

In addition to the new EOS M5 body, Canon has also announced a new EF-M 18-150mm f/3.5-6.3 IS STM zoom lens. As the press information states, it’s the first high-powered zoom in the EOS M range. The built-in IS promises up to four-stops of image stabilization and the lens, on the whole, should feel very familiar to those who know about Canon’s APS-C lens line-up.

It will be very interesting to see if a camera at this level will increase Canon’s competitiveness in the mirrorless market. At this price point, it’s already facing strong competition from Sony, Fujifilm, and Olympus.