If we could get all Buzzfeed for a moment... 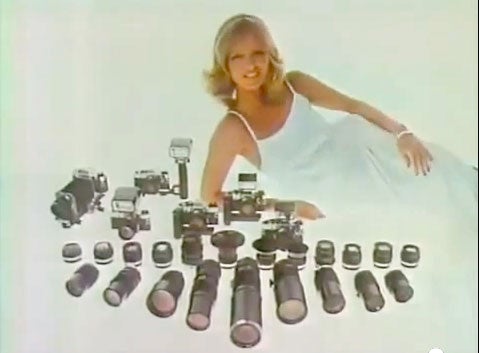 [Note: if the videos don’t load when the page does, refresh. Thanks a lot, Flash player.]

In a way, nostalgia is a huge driver in the field of photography. We take pictures to remember things. But, cameras have a history of their own, and that includes some amazing old advertising. What started as a heated office discussion has now turned into this massive collection of old camera advertisements. They run the gamut from early black-and-white live ads to ultra-colorful spots from the ’90s.

There are celebrity cameos, catchy jingles, and even a little sprinkle of subtle sexism mixed in throughout. So, here we present to you some of our favorite old camera commercials presented in no particular order.

In the late ’80s and early ’90s, super-zoom cameras were great for spying on very period-appropriate stars.

Bruce Jenner for the Minolta XG-1

Minolta Talker: The Camera that Talks to You

The Minolta Talker actually gave you verbal feedback about shooting situations, which made it a pretty interesting little camera. Though, it would probably be pretty humbling to have your camera constantly telling you how you were screwing up your photos.

Another appearance of the Minolta Talker, this time set in a parody of The Wizard of Oz.

We’re spoiled by autofocus now, but there was a time when it was a big deal. This ad from 1986 shows some very futuristic photography. You can tell because of the jumpsuits.{

There are some great Japanese camera commercials out there, but this one was meant to show off the super-fast shutter speeds of Nikon’s new SLR with an impressive display of boomerang mastery.

The brightly-colored commercials from the ’90s are fantastic , but if you’re looking for something truly retro, this Ansco Cadet commercial from the ’50s is perfect. It even contains the phrase “Hasn’t this happened to you?” The whole camera kit is just $11.95, too. Perfect.

During his prime, Andre Agassi was a total rockstar. Even that crazy haircut was popular in its time. He was the face of Canon’s Rebel series SLRs and his commercials were as ’90s as they come.

The Canon Photura had a form factor that made it look a lot more like camcorders we have now. It was actually a pretty interesting design, but it obviously never caught on. That’s not because it didn’t have a great commercial, though.

You can still find those Olympic edition AE-1s on eBay with the limited edition lens caps. Before you go looking for them, though, watch the commercial all the way through. The end has a chance to win a brand new, 1984 Trans-Am!

Canon really seemed to embrace the concept of finding love in a foreign land when advertising their cameras.

This is the commercial that spawned this whole list. Editor Julia Silber knows the words to this ultra-catchy jingle by heart. If you’re ever in the Popular Photography offices, she’ll be happy to sing it for you.

Way before Ashton picked up his Nikon, this was the kind of celebrity endorsement that moved units. It’s also interesting to see them brag about the photos being in color without being able to actually show them.

This commercial actually tries to offer some handy tips for making better photos and movies.

The horror. The absolute horror…

The woman is a national treasure.

Four flash pictures without changing bulbs is a big deal when this commercial is made. Also, I love the line “Think this way, man.”

Stewart for the Kodak Disc Camera

Stewart is not a celebrity, but his commercial is amazing.

I have literally no idea what’s going on here.

“Hold it. Focus and fire it.” When it gets back from space.

This is definitely not the best example of jingle writing here on the list, but it’s a nice reminder that Olympus has been making rugged cameras for quite some time.

It’s common to see stars like Eric Idle appearing in ads for camera companies, but this one actually has a famous photographer as well. David Bailey is one of the UK’s most famous photographers. He’s an icon in fashion photography. James Hunt is actually a famous racing driver. In fact, the new Ron Howard movie, Rush, is based on his life.

At one time, reminding people of all the moments they could miss was a great way to sell cameras and film. Babies were the stars of many photo gear commercials.

The idea of an animated camera commercial is a bit weird. Wouldn’t you want to show people pictures? But then again, there are quite a few weird things going on here.

It’s one thing to advertise your camera with a lot of zoom, but this one goes so far as to make fun of people who use “human zooms” by moving closer to their subjects. It’s actually quite reminiscint of that new Nokia Lumia 1020 commercial where parents climb all over one another at a school play to get the shot.

That’s a big camera. It’s tough to believe that having the date printed directly onto your photos used to be considered something so desirable that it was worth mentioning in advertisements.

Celebrities abound in old Polaroid commercials, even from the early days. This one shows off the Polaroid Pathfinder, which has a built-in self-timer.

This is a very well-made commercial for one of Polaroid’s most iconic cameras. The music is a bit odd, though. It gives a bit of a “The Shining” vibe.

James Garner and his hair pitching for the Polaroid One Step.

The Muppets for Polaroid

Perhaps the best celebrity endorsement of all time.

The Muppets for Polaroid Again

Gonzo is sad because no one wants to take his photo so he songs an entire song about it. Luckily, there’s a happy ending.

If product placement was this hectic in today’s television, we might not mind it so much.

A little good old fashioned subtle sexism to promote the Polaroid 1000. It’s so simple, even a woman can use it! Gosh!

This is definitely one of the darker commercials on the list. It almost seems too dark to really sell cameras.

The Pronto was an even lower-level camera, which meant that celebrity endorsement was even more important.

The Spice Girls for Polaroid

The Spice Girls also pitched Polaroid’s other products, including this film you can draw on.

This one is a little sad. Polaroid trying to take advantage of the Y2K paranoia about the digital technology that would eventually bring about their demise.

Cheryl was the official pitch model for Olympus’s OM seres for some time. Love that shot of her next to the entire system.

“I don’t’ know the difference between a lens opening and a Broadway opening.” Just adorable.