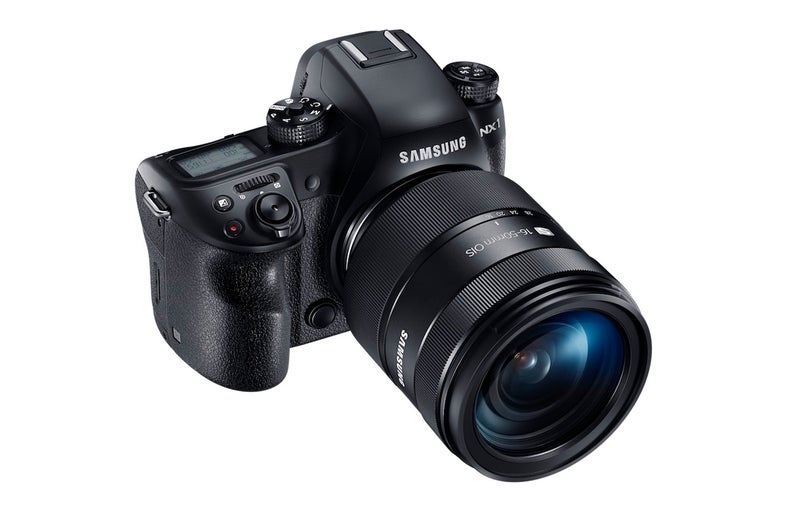 In the time since interchangeable-lens compacts (ILCs) first hit the market, we’ve seen a rapid advancement in on-sensor autofocus, the adoption of Wi-Fi, the advent of high-definition (and more recently 4K) video capture, and much faster burst speeds.

Samsung’s NX1 improves on all of these while presenting the first APS-C-sized back-side illuminated (BSI) CMOS sensor. Since the circuitry is on the back of the sensor, there’s more room on the front for larger pixels placed closer together, letting it capture more light than a traditional sensor could. Translation: more detail, less noise.

We brought the NX1 ($1,500, street, body only; $1,700 with 16–50mm f/3.5–5.6 Power Zoom ED OIS lens) into the Popular Photography Test Lab to see how it measures up. We also subjected it to rigorous field testing to see how it fares in tough shooting conditions.

While a BSI sensor allows for larger pixels on the same size chip, Samsung pushed the pixel count to its highest yet in the NX series: 28.2MP. Thanks in part to the fact that the camera ships with Adobe Photoshop Lightroom 5 as its RAW conversion software, in our test images we saw lots of detail with relatively low noise across most of its sensitivity range. All of this, plus an Excellent rating in our color accuracy test, led to the NX1’s overall image quality rating of Excellent from ISO 100 through 3200.

All in all, it seems that Samsung’s use of a BSI sensor paid off when it comes to capturing fine detail.

Noise performance also seems to have benefitted from the new sensor. As always with cameras that ship with Lightroom, since there are no default settings, we applied varying amounts of luminance noise reduction (NR) during RAW conversion to find the best balance between noise and resolution in the resulting 16-bit uncompressed TIFFs. For our final test results, we applied 25 percent NR to images shot at ISO 100–400, 50 percent to those at ISO 800, and 75 percent at ISO 1600–51,200.

Both the Canon and Nikon maintained top honors of an Extremely Low noise rating longer than the NX1 did (Canon to ISO 200 and Nikon to ISO 400), but judicious application of Light- room’s NR should yield lower noise while matching or exceeding the resolving power of the Canon or Nikon, thanks to the NX1’s higher pixel count. At the settings we used, the NX1 served up 2875 lines at ISO 400, beating the D7100’s 2820 at ISO 100.

Forget the notion of compactness in an ILC. The Samsung NX1 is almost an inch wider and about half an inch taller than Canon’s EOS Rebel SL1, the smallest DSLR.Sure, the NX1’s body is about 0.15 inch shallower than the Canon’s, but this ILC isn’t tiny. And given that it’s aimed at higher-end users, we think this is a good thing.

An advanced camera should have a firm grip, and a little bit of heft can be helpful when trying to shoot steadily, especially with collection of dedicated buttons and dials provides access to all the most important camera settings.

Taking a page from the Nikon playbook, the NX1 has a dial on the left side of the camera top for drive mode and four dedicated function buttons. A status LCD display gives the camera more of an SLR feel while providing a less cluttered view through the OLED electronic viewer. This has a super-speedy 5-millisecond refresh rate, making the EVF experience seem very natural, closer to an optical finder.

The NX1’s autofocus is the fastest we’ve seen of any ILC, and tracking proved reliable with all of the subjects we shot. This is in part thanks to the sensor’s read-out speed of 120 frames per second coupled with the new DRIMe V processor that Samsung says is 2.8 times as fast as its previous image processor. Its AF tracking talent is quite important, since the camera can capture bursts at up to 15 fps when using a UHS Speed Class 3 SD card. Plus, the buffer can hold an impressive 25 RAW shots, or up to 70 Large, Fine JPEGs.

The NX1 is the first camera to take advantage of the new H.265 video codec. Also known as HEVC, it offers a higher level of compression than H.264 without compromising quality, and was developed with an eye toward 4K. The NX1 will record 4K or standard high-def video directly to the memory card, and it also allows output of uncompressed 8-bit 4K to an external recorder through the camera’s HDMI port. Footage we captured in both 4K and 1920x1080p looked wonderful. The NX1 can cap- ture 4K at the professional DCI standard of 4096×2160 at 24 fps as well as at the UHD standard of 3840×2160 at 30 fps and 24 fps.

For sports shooting (and for Samsung to show off the camera’s processing power), the NX1 includes the company’s new Auto Shot mode. So far limited to tracking baseball batters, this feature places a drawing of a batter and a vertical line on the screen. Place the drawing over a real batter in your scene, and the camera will watch for the ball to enter the frame, track it, and trip the shutter just as the bat and ball converge.

We didn’t have much reason to use it, but it does deliver the goods. Wi-Fi continues to be one of Samsung’s strong points. This time the company included the latest 802.11ac standard, which is said to be four times the speed of the more prevalent 802.11n. It can use Bluetooth 3 to create a constant connection to your smartphone without the big power drain of keeping Wi-Fi active at all times. Then, when Wi-Fi is needed to transfer an image to your smartphone (for instance, if you have the camera set to transfer all images as they’re shot), the Wi-Fi turns on, the image is transferred, and Wi-Fi once again powers down as Bluetooth takes over.

It’s pretty clear that Samsung is trying to make a big statement with the NX1. The camera is outfitted with the latest standards in all areas, has the largest BSI sensor of any consumer model, boasts an extremely fast burst speed, captures 4K video even at the DCI standard typically seen only on professional camcorders, and delivers beautiful image quality.

And the company continues to add premium glass to its lens lineup (see our test of the 50–150mm lens on page 72) and shows no signs of stopping. If you don’t have a collection of lenses for another system, Samsung’s NX1 offers a compelling option outside of the Canon and Nikon stalwarts at a price that’s appealing, especially given everything the NX1 can accomplish.