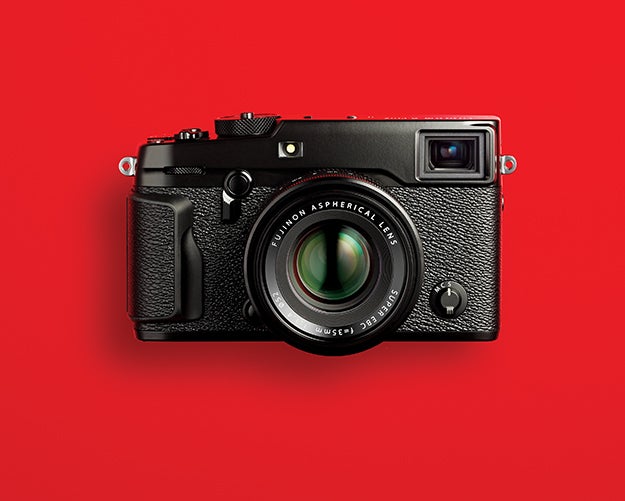 While Leica remains the only option for a real optical rangefinder in a digital camera, Fujifilm captured the attention of many rangefinder fans when it introduced the X-Pro1 back in 2012. And the company has managed to keep the X-Pro1 body relevant much longer than some other manufacturers might have, thanks to its policy of using firmware updates to add features that were introduced on other X-series cameras. But, as we enter the fifth year of Fujifilm’s APS-C-format interchangeable-lens compact (ILC) system, it’s time to refine the hardware.

With the new X-Pro2, slated to hit stores in late February with a street price of $1,700 (body only), Fujifilm steps up to a 24.3MP X-Trans III CMOS sensor from the 16MP X-Trans CMOS in the original. The company says that the images captured with this new sensor can provide a perceived resolution beyond what you might expect given the pixel count.

While we haven’t been able to run our full lab tests yet, since we didn’t have the final RAW conversion software in time to make our press date, we were impressed with the amount of detail we saw in JPEG images, even at higher ISOs. Take, for example, the picture shown in the camera’s LCD above: It was shot with a preproduction sample of the X-Pro2 at ISO 12,800 and retains a remarkable amount of detail, even though it was taken through the window of a New York City subway car.

Though we framed that shot on the camera’s 3-inch 1,620,000-dot LCD, the X-Pro2 brings with it an upgraded hybrid viewfinder. Using a lever on the front of the camera, you can switch between an electronic viewfinder and an optical view that mimics a classic rangefinder. In that view, frame lines are projected on the finder to match the focal length you’re using to shoot. It automatically adjusts for parallax errors, so you’ll notice that the bright frame moves a little bit as your focus shifts between near and far points. As with most rangefinders, there’s a limit to the focal lengths that are compatible with this view, though the X-Pro2 can handle up to 140mm (210mm equivalent).

Since a big part of rangefinder shooting is manual focus, the X-Pro2 includes multiple ways to help you focus. The camera can display a magnified electronic view of your selected focus point in the lower right corner of the optical finder, or show a magnified view through the EVF view. You can also enable focus peaking, which will highlight the edges of subjects that are in focus in your choice of red, white, or blue.

If you’re using a fully manual lens in focus peaking mode, you should know that the camera illuminates the edges of anything in the frame that is in focus. So, if you stop down to a small aperture such as f/8, you’ll end up with a lot of highlighting in your frame. This can be helpful if you’re trying to angle the camera to ensure that certain objects both near and far from the camera are within the zone of proper focus, or if you’re wondering how far you need to stop down when focused to a particular distance. If you’re using a lens that communicates with the body, such as a genuine Fujifilm X-series lens, you can display a distance scale that shows your depth of field as a bar on the scale—you won’t see that through the finder of a Leica M.

What you can see through that Leica finder is a split image to help you focus. And you can find something similar in the X-Pro2’s finder if you opt for the electronic split-image focusing aid. Used with either the EVF or the LCD, it fills a large portion of the center of the frame with four bars that shift horizontally as you focus. Align the images in the adjoining bars and your focus will be correct. Press in the rear command dial and you can even zoom in on the split image to refine your focusing further. If you’re using the optical finder, you can get a zoomed-in view of the center portion in the lower right corner of the finder, with the split-image focusing aid, by pushing the lever on the front of the camera toward the lens.

This and the small zoomed-in magnified view are new with the X-Pro2 and add greatly to the rangefinder-like feel of the camera. Plus, the split-image feature works fine even with lenses that don’t communicate with the body. We were able to use an MS-Optics 35mm f/1.4 Apoqualia M-mount lens, with Fujifilm’s M-mount adapter, and had no problems. MS-Optics lenses are handmade in Japan by a man named Miyazaki Sadayasu and contain no electronics at all. So, if the X-Pro2’s split image works with that lens, it should work with any glass that can mount on the camera.

Even though the X-Pro2 looks a lot like its predecessor, Fujifilm improved the ergonomics. We were pleased to see that the grip has been refined. It still isn’t nearly as big of the grip as you’ll find on a DSLR, but Fujifilm has carved out a ridge on the front side of the grip, similar to the one for your thumb on the back, that makes the X-Pro2 feel substantially more secure in the hand than the X-Pro1 did. It’s also more comfortable to hold down at your side when not shooting, which can be advantageous to street shooters who might be trying to blend into the crowd between shots. (For a more pronounced grip, Fujifilm also offers an accessory, though the price has not yet been set.) More important to the shooting experience is the new joystick on the camera back. As you can with high-end Canon and Nikon DSLRs, this lets you easily move your autofocus point around the frame. It’s hard to underscore just how convenient it is to be able to shift through AF points this way and we truly enjoyed our time with the X-Pro 2. Furthermore, the number of selectable focus points has increased to 77 from 49.

As if we needed another way to evoke the cameras of the film days, the X-Pro2 embeds a dial to adjust ISO into the shutter-speed dial. Lift up while grasping the edge of the dial and then turn to change your sensitivity. We could practically smell the fixer every time we changed the ISO. The new mechanical shutter goes up to 1/8000 sec and flash sync is set at 1/250 sec.

With two pages of menu items for button and dial settings, there’s a healthy amount of customization possible with the X-Pro2. You can swap the functions of the two command wheels, switch the direction of the focusing ring for Fujifilm’s electronically controlled manual-focus lenses, swap the autofocus and autoexposure lock buttons, and assign any of 26 different functions to one of the six custom function buttons. If you enjoy Fujifilm’s film simulation modes, you’ll want to give the new Acros mode a try. It is meant to evoke the feel of the company’s monochrome celluloid with smooth tonal gradations, deep blacks, and detailed textures. As you can with the standard black-and-white film simulation mode, you can also simulate yellow, red, and green filters to enhance contrast, darken skies, or enhance skin tones.

Even if you don’t want to use the JPG that the camera produces, you can shoot in RAW+JPG and get a rough idea of a monochrome output as you shoot. Using that approach will also let you preview in black-and-white if you use the EVF. If you’re not familiar with the film simulations, you can set the X-Pro2 to do film simulation bracketing, which generates multiple versions of the same image with different simulation settings so you can choose your favorite.

One of the things most people love about Leica rangefinders is that they are built like tanks. While modern, electronic cameras can’t match the ruggedness of the fully mechanical cameras of yesteryear, the X-Pro2 is built to last. The body is made of magnesium alloy. The dials on top of the camera are milled from aluminum, and there are 61 weather seals to fight dust and water.

We found very little to complain about, though the X-Pro2 is obviously not the best camera for every shooter. It wouldn’t be our first choice for very critical sports photography. Though its burst rate of 8 frames per second for up to 83 JPGs or 27 uncompressed RAW frames is certainly enough for most casual, and even some serious, sports shooters, its AF tracking options don’t match the top you can get from Nikon and Canon. In our field use the camera tracked subjects well, but pro-level (and significantly more expensive) DSLR bodies have an edge in this area.

Our one gripe that would be echoed by nearly any shooter is that the ISO dial gives you only one option for the sensitivity setting above ISO 12,800. Since it has one high setting, marked with an H, you have to choose if you want this to be ISO 25,600 or ISO 51,200. To change it, you have to go to the ISO dial setting in the menu page for buttons and dial settings that you access through the Set Up menu.

Fujifilm has built an extremely nice camera in the X-Pro2, and in the system’s fifth year has built out a good and still-growing selection of glass for it. This is further bolstered by the optics offered by third-party lensmakers, underscoring the popularity of the system. Add the ability to use adapters to mount a wide array of manual lenses and you’ve got more than enough choices to keep you shooting for a long, long time. Of course, we could have plenty of fun photographing the rest of our days with Fujifilm’s own 14mm f/2.8, 35mm f/1.4, and 56mm f/1.2 primes. If you need us, we’ll be traveling the globe and peering through a hybrid finder.