Don't have a beauty dish in your collection of lighting modifiers? Try a reflective umbrella 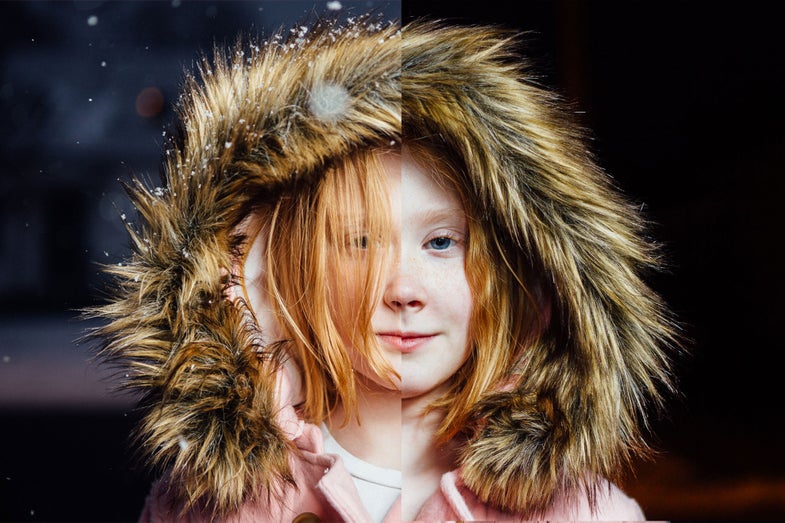 A beauty dish can be a very useful light modifying tool if you shoot a lot of fashion portraits. If that’s not your main cup of tea, however, they can be pricy and they take up a ton of space in a gear bag if you’re trying to use it in the field. But, if you want that lively, focused look for a tight portrait, you can actually get something similar using a cheaper (and more compact) reflective umbrella. Here’s an example of how to do it.

The Gear: For the original photo, I used a Canon 6D with a 24-70 F/2.8L lens and the relatively new Phottix Indra 500 portable mono-light with their collapsible beauty dish as a modifier. Pretty basic stuff, but well over $3,500 worth of gear if you were to go pick all of it up right now. For the budget version, I used a Canon 7D (Mark I) with a 50mm F/1.8 STM lens, a Canon 580 EX (also a Mark I) flash, and a cheap soft silver reflective umbrella I bought from Midwest Photo Exchange’s booth a few years ago at Photo Plus. All told, the budget setup checks in around $1,000 on the secondary market, but you could go a lot cheaper if you wanted to.

For the original image, I positioned the beauty dish as close to the subject as possible before it started encroaching into my shot. The collapsible nature of the beauty dish means that a grid wasn’t an option, but I honestly wouldn’t have used one anyhow. I wanted the light to be directional (positioned slightly above the subject and slightly to camera right), but I didn’t want the fur from the hood to cast weird shadows on the face.

In a case like this, I would typically bring out another flash or two in order to create a nice kicker light around the fur from the back, but we were working quickly trying to catch the snow while it was falling and my subject wasn’t thrilled about standing in the cold while I fiddled with a bunch of lights. Since I was going to be using this as an example for this article, I wanted to keep the focus on getting the key light looking as we want it.

I chose a reflective silver umbrella for the recreation in large part because, well, it kinda looks like a beauty dish. The spread is much flatter so the light beam isn’t nearly as tight and it’s bigger in diameter, so the overall hardness of the light has a slightly different quality. In order to keep the light from spreading too widely, I choked up in the umbrella clamp, moving the reflective surface of the umbrella closer to the flash itself. In doing so, it creates a light that’s a little hotter near the center (because the flash is creating a very clear hot spot on the umbrella surface itself) and tightens up the beam a bit. It helps get a similar catch light in the eye as well. This effect is augmented by the fact that the umbrella is silver on the inside rather than white, which would create a slightly softer look.

In order to fire the flash, I simply used the pop-up flash to fire the speedlight in slave mode. If your camera doesn’t support something like that, you can spend more money and use radio triggers or simply get a manual flash with a sync port and use a cable to fire it the old fashioned (and extremely reliable) way. 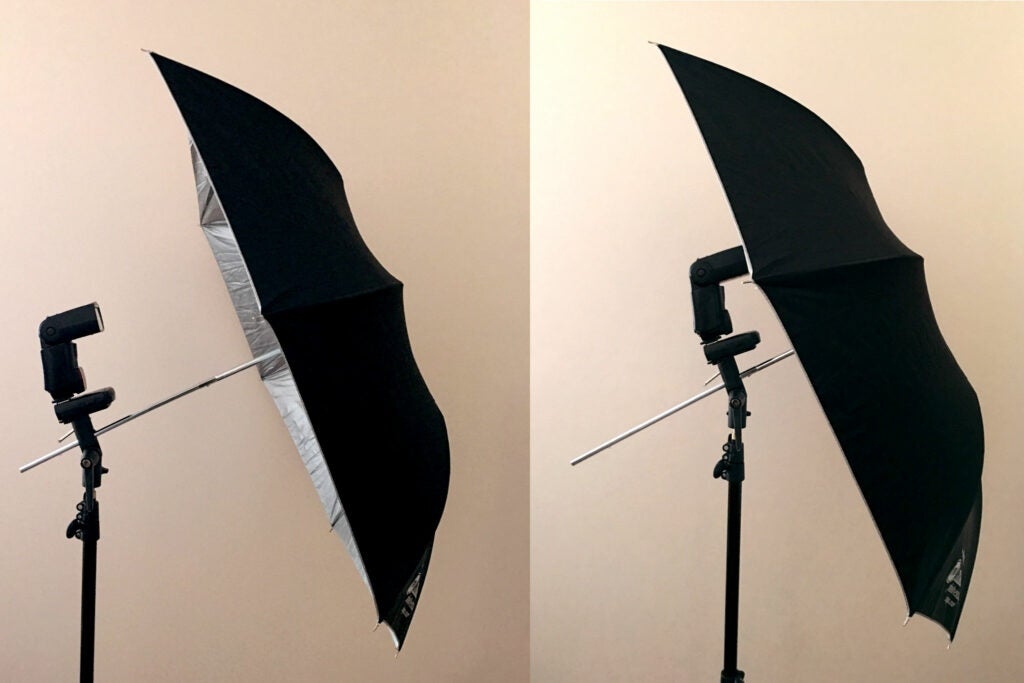 Choking Up on the Umbrella

By putting the umbrella closer to the light source, it creates a hot spot on the reflective surface, which is brighter and more direct giving it a look that can more closely mimic that of a beauty dish.

The Shots: As you can see, the two frames look a bit different in terms of ambient light. I actually shot the budget photo a day later when it was later at night, so rather than getting natural ambient in the background, we’re picking up the reddish hues from the street lights. It also, sadly, wasn’t snowing, so we don’t get the wonderful wintery globes in the frame from the out of focus snow catching the flash.

I shot the original at F/2.8 because the background is a little busy and I wanted to make sure that it didn’t interfere with the subject. For the budget version, I started shooting at F/4 simply to prove that you don’t need a fast lens to make something like this happen. The 50mm STM is about as budget as it gets, though, and it opens much wider, so the final image was taken at F/2.8 on that end as well.

As for the posing, our model here is only nine and wanted to show off her “messy model hair,” so I obliged. I liked the contrast of it against the furry hood. I didn’t want to get too fancy because the image is about framing the face with the hood.

Here are the images as they came straight out of the camera with no editing.

The Next Steps: If you wanted to take a shot like this further without adding a lot of fancy equipment, I think I would try adding a kicker light to accentuate the fur on the hood. Any old hot light would probably do just fine, but you’d probably want to use something that’s directional to keep the light from spilling into the key light and mixing up the temperatures on the face. Even an LED bulb with its notorious blue tint might work in a situation like that to make the whole thing feel more wintery.

When to Use This Technique: While a beauty dish does throw off diffuse light, it’s also fairly directional and not overly forgiving. It’s very popular with fashion photographers who have access to great makeup artists. In this case, the subject is young enough to have great skin, so it was also a non-issue. If you’re shooting with someone who has less than perfect skin, it may not be the most flattering, as demonstrated by this glorious selfie. In that case, maybe stick to a shoot-through umbrella or something a bit softer.