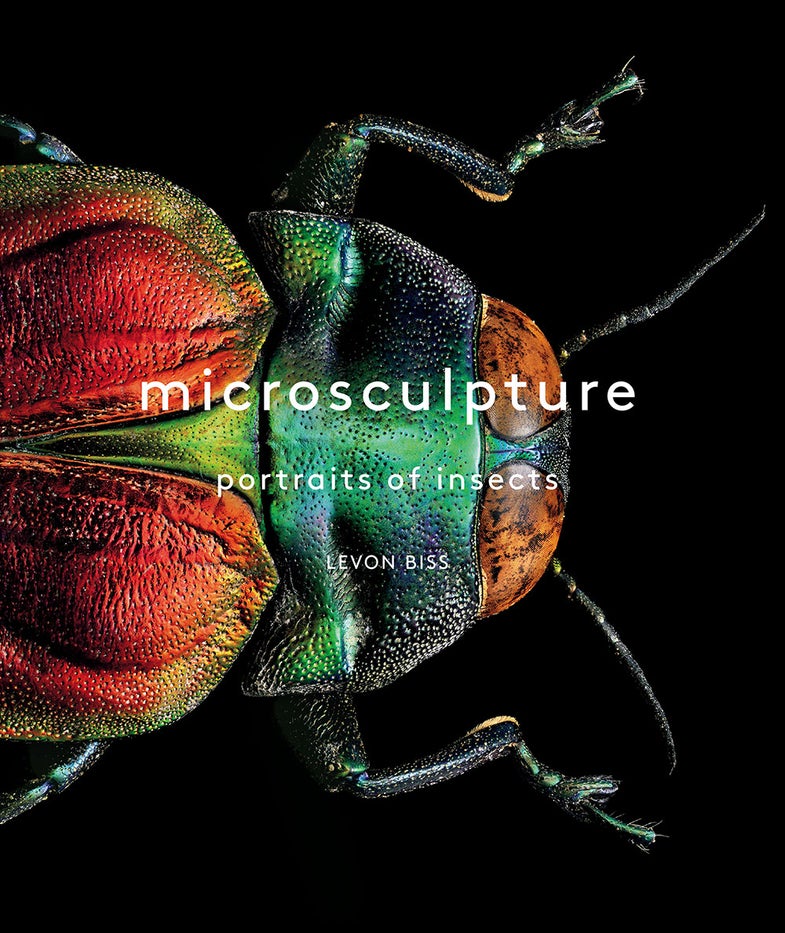 We typically think of insects as pests or pestilences, carrying disease or gnawing their way through our gardens before we can get a bite. But they are also gorgeous creatures, as photographer Levon Biss explores in his latest book, Microsculpture: Portraits of Insects. The book is a continuation of his Microsculpture exhibit at Oxford’s Museum of Natural History, which displayed bugs from the collection in a larger-than-life way.

To get the highly detailed portraits, he took over 8,000 shots of a single specimen and stitched them together, a process that takes about three weeks to complete.

Here are 10 fantastic creatures from the book for you to enjoy. And when you’re done admiring the belles of the bug ball, check out more beautiful bug photography in some of our other insect-centric galleries.

The branch-backed treehopper from Belize has an oddly elongated thorax that curves up, creating an almost perfect circle. Treehoppers, which send out low vibrations through trees to communicate with each other, have evolved a variety of different shapes and sizes of spectacular headgear, and scientists aren’t entirely sure why. It could involve camouflage or defense from predators.

The common reed beetle is actually now a rather rare resident in the United Kingdom. They develop underwater, but still need to breathe, and rely on air-filled sacs in wetland plants to get the larvae the breath of fresh air they need.

There are over 25,000 longhorn beetle species known to science, including this jewel-toned variety from Nigeria. Its larvae eat dead wood, and can take up to 20 years to develop into adults like this magnificent specimen, with fine butterfly-like scales providing stunning color.

It might share a name and a shape with the more famous praying mantis, but this mantis fly is unrelated to more pious counterparts. However, both use their grasping legs to grab on to their prey, and dig in for a meal.

It might look like a muskox with curving, horn-like antennae, but this flightless creature is actually a moth. It lives, Biss says, in the remote reaches of the Indian Ocean on the Prince Edward Islands, where it feeds off scraps that build up in albatross nests.

The Peruvian Amazonian purple warrior scarab is not to be trifled with. It emerges at dusk throughout the Amazon basin, and acts as a distinct cleaning service for the region, carving up dead animals with its serrated legs.

The short-nosed weevil could be a stand-in for Snow White, with its light-reflecting scales. This species, from Brazil, has yet to be investigated in full.

Tiger beetles, like this one from Boreno, are fierce hunters that can pursue prey so quickly that they temporarily lose sight of the world around them. They frequently stop in their blurred pursuit of their meals, using their antennae to avoid obstacles.

This tortoise beetle from China may look imposing, but it likely fed on leaves. These beetles, Biss writes, wear their domed armor like protection (or maybe camouflage), but their larvae use a different approach, covering themselves in a coating of discarded skin and feces.

This treehopper, unlike its earlier mentioned circular cousin, has a triangular outgrowth that looks almost like a shield. The orange and black colors are typically a warning sign in nature, saying to all would-be predators; ‘Danger: not eat.’