How To: Shoot a Portrait through a Glass Window 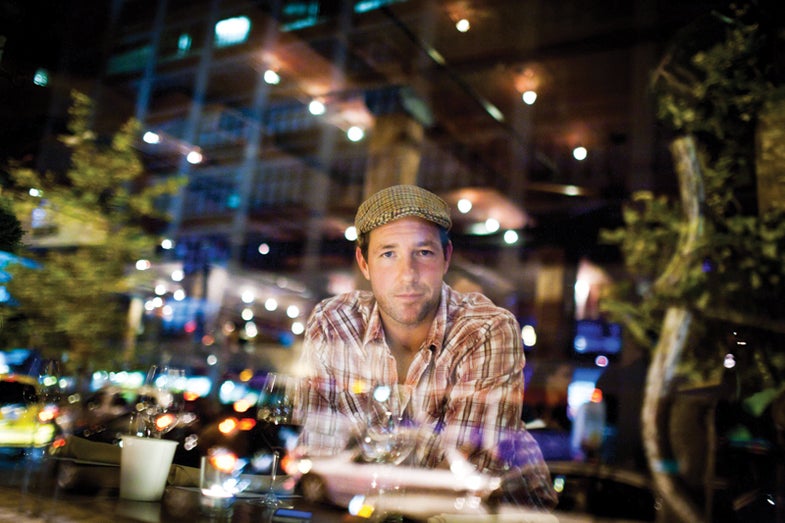 Looking for reflections and contemplating the metaphorical implications of double exposures lets photographer Ramsay de Give experience the world with fresh eyes. He recalls the awe and wonder he experienced on seeing double exposures as a child—happy accidents that resulted from frames that didn’t advance through his parents’ 35mm film camera. “As a pro, I sometimes hit a creative wall, not producing anything I like,” he says.“Chasing dreamy reflections on assignment has been a means to visual exploration and it allows me to stay creative.”

The New York-based freelancer made this portrait of actor and director Edward Burns on assignment for the Wall Street Journal during a wine tasting and film event. Formal portraits are tricky at crowded public events, so de Give made every unexpected opportunity count. “I like to create four or five looks for my subjects,” he says. “I try a few camera angles and have the subject look at or away from me.”

When Burns took a short break from the wine tasting at a New York restaurant, de Give asked him to pose inside while the photographer stepped outside to capture the actor through a window. Using hand signals, de Give directed Burns where to look and stand.

Shooting through glass can add unusual dimensions to a portrait. Focusing on the subject lets you play with the relative sharpness of the reflection by manipulating lens aperture, focusing distance, or both. “Depending on the look you want, you can adjust the aperture until you’re faced with technical limitations due to light,” he says.

The glass pane also presents unusual composition options. Here, for example, it oddly flattens the scene, and its plane and reflections lie oblique to the line drawn by the subject’s shoulders. The resulting portrait seems off-balance in an eye-catching way.

Using a Canon EOS 5D with a 35mm f/1.4L Canon lens at f/1.4, de Give quickly captured a few different looks, pausing only once to check focus. “You don’t want to lose the subject’s attention,” he warns. “Staring at the back of a camera kills any interaction, especially with someone who’s been photographed as often as Edward Burns.”