Who needs a paper backdrop when you have the Milky Way at your disposal? 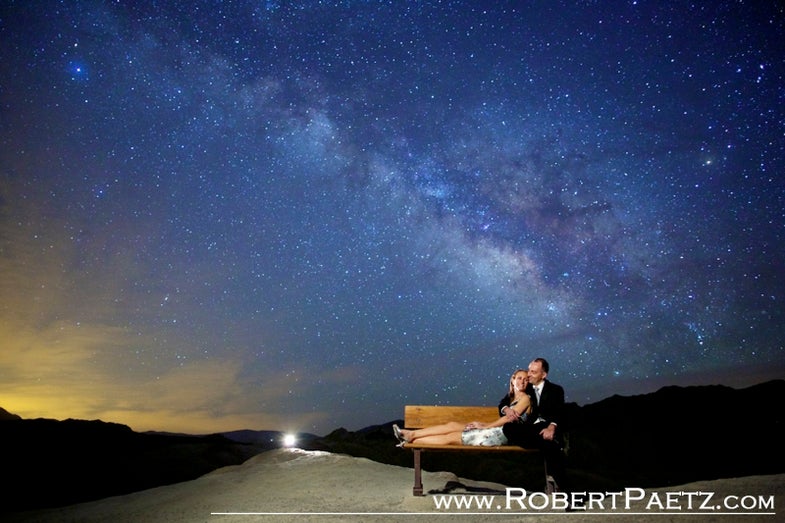 One of the most challenging aspects of being a wedding and portrait photographer can be the constant need to come up with new ideas and locations. California-based shooter, Robert Paetz decided to use the night sky as a backdrop and the resulting images are as unique as they are impressive. In this interview, Robert shares his technique as well his inspiration.

How did the idea for an astrophotography engagement shoot come about?

Last year, when a client of ours asked about shooting their engagement session in Joshua Tree… in August. It gets to be 100 degrees there during the days. My wife Felicia (and the other half of Robert Paetz photography) looked over at me and groaned “Can we just shoot in the middle of the night?!”.

I sat there for a second and began to put it all together. Why couldn’t we shoot at night?

I had just been doing some research into astro photography the week before, and I started calculating f/stops and shutter speeds in my head. I figured with the low noise/high ISO combo of newer DSLRs it could be done. So with that in mind, we shot an email to our adventurous couple and told them to meet us by the vending machines of a dodgy desert motel at 2am the next weekend. They agreed, and we found ourselves on the first shoot of a continuing project merging astro-photography with couples’ engagement sessions.

How long did it take to shoot from beginning to end?

We normally start around 2am and shoot until the skies begin to lighten about 90 minutes before sunrise, or whenever the stars begin to fade from sight. Around this time, I will fire up the camp stove, and we’ll all have a cup of coffee, then finish the session with a more conventional photoshoot as the sun comes up.

How did you decide upon the location?

A hundred years ago we could all have seen skies like this from most places, but because of urbanization and electricity we have polluted our skies with light, leaving the view of the stars confined to the deserts and wild places. When going into a session like this, we have to take several things into account: if the moon is too bright you will lose the stars, if you are too close to an urban location, the light pollution will obscure the night skies (in a few of these pictures you can see a corner of the sky lit by Las Vegas or Palm Springs) and if it’s cloudy you just won’t see anything.

I estimate that one would need to get out at least 100 miles away from any major urban center (for example, we shot in Death Valley, which was recently named a ‘Gold Tier’ Dark Sky Park). Then plan to shoot in the darkest part of the night.

Light pollution is a very real issue, and organizations like the International Dark-Sky Association now raising awareness about how our night skies, once full of stars so easily visible, are now quickly vanishing and have to be sought out in far-flung locations. Efforts are being made even for iconic cities like Paris to dim their lights a little, and even home improvement stores are selling “dark skies-friendly” exterior fixtures that direct light downwards to help mitigate the problem.

**How did you approach the composition for the images? **

When it comes to astrophotography, we really want to draw attention to the beauty of the night sky, and let the awe-inspiring scenes be the focus. Close-up images would throw the Milky Way out of focus and defeat the whole purpose of standing in the pitch black of the desert in the middle of the night. We chose to use a wide angle lens to get both our subjects and the night skies in focus, and dwarf the subjects against the vastness and majesty of the night sky.

**Can you explain the technique for shooting them a little? **

During these are long exposures we fired our off-camera Canon speedlights once while the shutter was open to expose for the subjects. I did this manually using a Canon ST-E3-RT (or a Pocket Wizard for the very first shoot in Joshua Tree). Some of the images have the flash being shot through a 60” or 45” umbrella and on others, we used the tiny Lumiquest Softbox III because it was way too windy on some nights.

Was it difficult to balance the high-ISO required for the star shots while keeping the people looking good?

These images were shot on both the Canon 5D Mark II and the 5D Mark III, both of which have spectacular image quality at high ISOs (as I am sure the newest Nikons also have). It took some testing, but even at 3200 ISO we are still able to get a super clean 30” x 20” prints.

Is it a challenge to continuously come up with creative ideas when you’re shooting so many couples?

While it can be a challenge to remain creative day-in and day-out, Felicia and I also remind each other about the amazing life we get to lead and the awesome people we get to meet. Every week we are in a different place creating something unique for each couple, and we get to do it together. Photography can run you ragged at times but pushing the bounds of creativity keeps things fresh, challenges us, and reminds us that change is the only constant in life, so we have to keep up.

It is of course, incredibly gratifying and humbling when our clients trust us so much to take time out of their busy schedules and go along with our seemingly far-fetched ideas.

Have you gotten much reaction from the photos?

As expected, the masses screamed “Photoshopped!”

We thought it was amusing when the clients in the astro shoots told us that their friends & family would not believe that the images were actually real. It was probably extra frustrating for them, since they all had to make the long drive (to either Death Valley or Joshua Tree) after a long work day, wake up in the middle of the night to get dressed up for photos, yet kept such an excellent attitude despite being severely sleep-deprived!

We have had so many complete strangers come forward with words of encouragement and support, just to let us know how incredible they thought these images were, which was certainly unexpected!

At the end of the day, our clients are thrilled with the outcome, we had fun trying something different, so it’s all good.

Are astro-portraits becoming a normal part of your shooting arsenal?

We’ve actually already done three of these astro-sessions since, and before we ever took the first clients into the desert we went out alone and took pictures of each other to nail down the technique. It was through such a ‘test run’ that it occurred to us that an umbrella might not always work on a windy night, thus the back-up mini Lumiquest softbox.

Do you have any tips for someone looking to give night sky photography a try?

– Check the moon phase: A full moon brightens the night sky a lot, which means fewer stars will be visible.

– Bring extra water, food, and warm clothing (as an Eagle Scout, it would be remiss if I didn’t remind you that you are still in the wilderness).