What Is It Like To Photograph an NFL Game In a Blizzard? 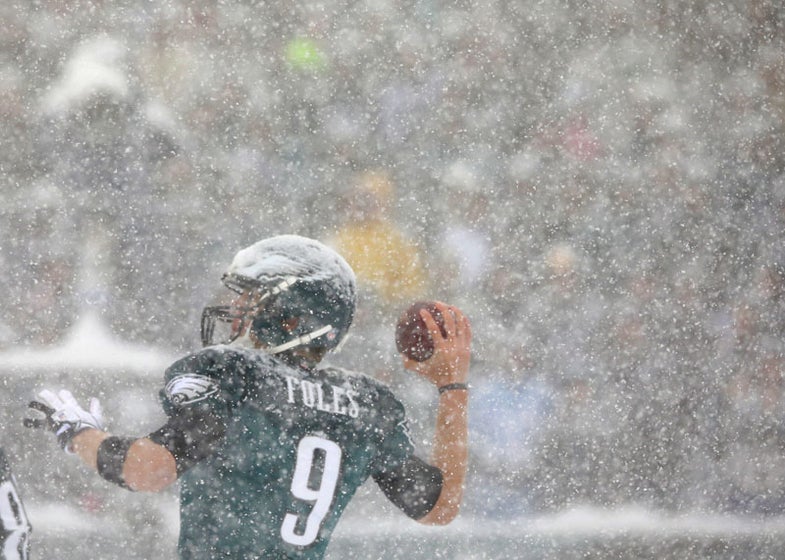 If you tuned in during the first quarter of this weekend’s Detroit Lions vs. Philadelphia Eagles NFL game, you may have thought something was wrong with your TV. The snow was coming down so hard, you could barely see the players on the field. Veteran sport shooter Michael Perez was on the sidelines during the game trying to capture images for the Associated Press. What’s it like to photograph a game that’s too snowy for either team to even attempt a field goal? Michael shares his experience below. 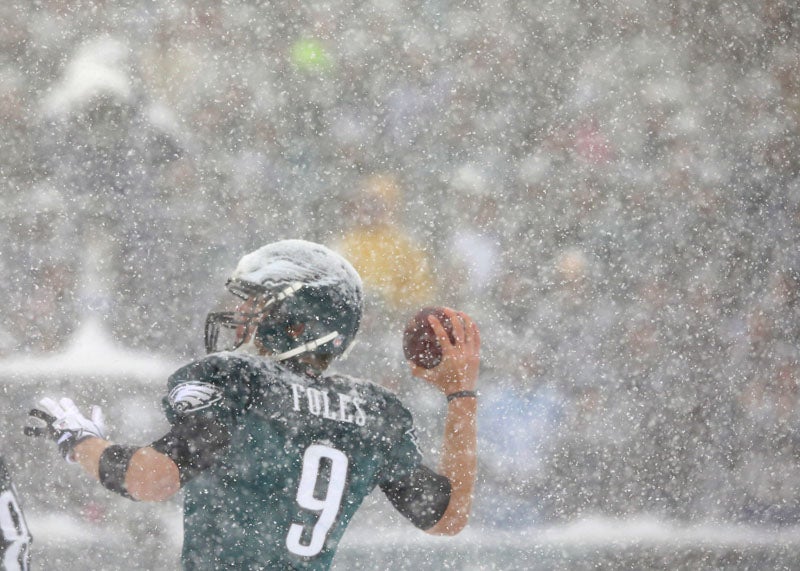 Did you know the snow was going to be so intense going into Sunday’s game?

We had no clue. I was talking to a few other photographers before the game and we heard the weatherman say that the snow was going to start coming down around 3:00. They were expecting one inch, maybe a little bit of rain. We were all cool with that.

We went outside to shoot the pre-game stuff three hours before kickoff and it was clear. Then we went inside to upload some images. We came back out and it started to snow. Then, the first quarter comes and it’s like somebody turned on a switch. It was a complete white out.

Did you have rain gear to protect your cameras?

We prepared like we would for any rain game. We all have some kind of rain gear packed in our bag just in case, because you never know what will happen. You always try to be prepared.

I was lucky I packed an extra hat for myself because my first one got soaked by the half.

What other challenges come with severe weather like that?

My gloves were soaking wet and you just couldn’t feel anything. I had to keep checking my camera to make sure I was actually hitting the shutter button [laughs]. Everybody’s fingers were numb.

You talk to any photographer who was there and it was near impossible to get anything in focus.

Focus definitely seems like it would be a challenge with all of those little targets (snowflakes) floating around in the air.

For all of the first quarter and most of the second quarter it was a near whiteout. The AF was getting fooled a lot. I was trying everything. I tried matrix focus, 3D, single point. If you get one little snowflake in front of that focusing point and the focus would go everywhere. There were a ton of white frames, a ton of dark frames, out of focus frames [laughs]. It was really, really frustrating. 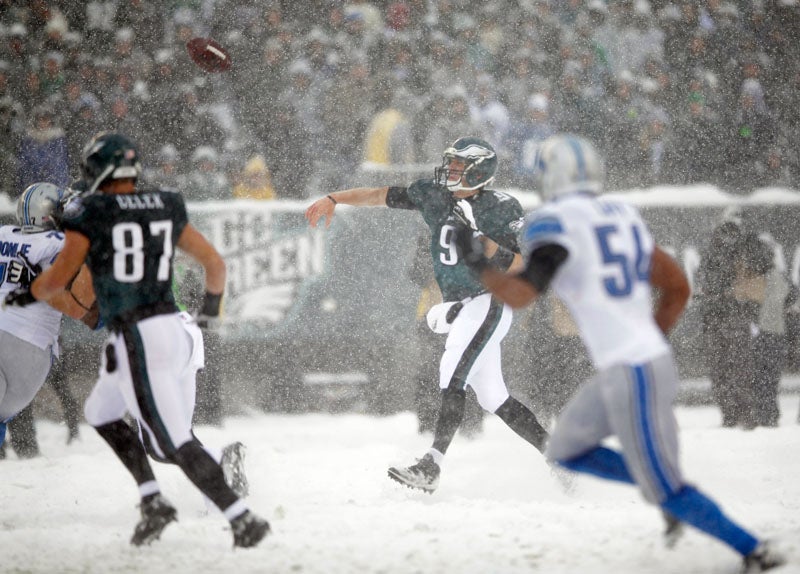 What did you do to combat it?

For a while, I dropped the 400mm and tried to get closer to the line of scrimmage with the short telephoto and that seemed to work a little bit. Then you’d get a little too far away and need to switch back. I was just looking for contrast on jerseys so I could get focus. I would just put the AF point on their numbers. Sometimes you just can’t keep up and the picture is gone. You’re bugging out because you’re trying to shoot the play but all you can see is white.

Yesterday I was shooting three cameras. One had a 400mm lens, one over my shoulder was an 80-200mm and I had a wide angle around my neck. That’s your typical kit.

Were you using card-runners to get your images back to the editors? It seems like their movement might be hindered with all that snow.

AP let me borrow one of their cameras that was hooked up to a transmitter via the ethernet port. It let me send photos directly to the editing room. I still had a runner, but this was much faster. We were doing some self-editing on the field and moving stuff so we could get pictures out as fast as possible.

What’s the workflow for on-field editing?

My main camera with the 400mm lens was connected. If I shot something with the other two I would put the card into the connected camera, edit and send. The connected camera who basically work as my computer on the field. If something really important happened and I didn’t have time to switch cards I would send the card back with a runner. It was great.

The staff photographer working on the other side of the field had two of three cameras connected. We would still ship cards back so the whole take could also be downloaded and edited. We would ship mid quarter and at the two minute warning of each quarter. 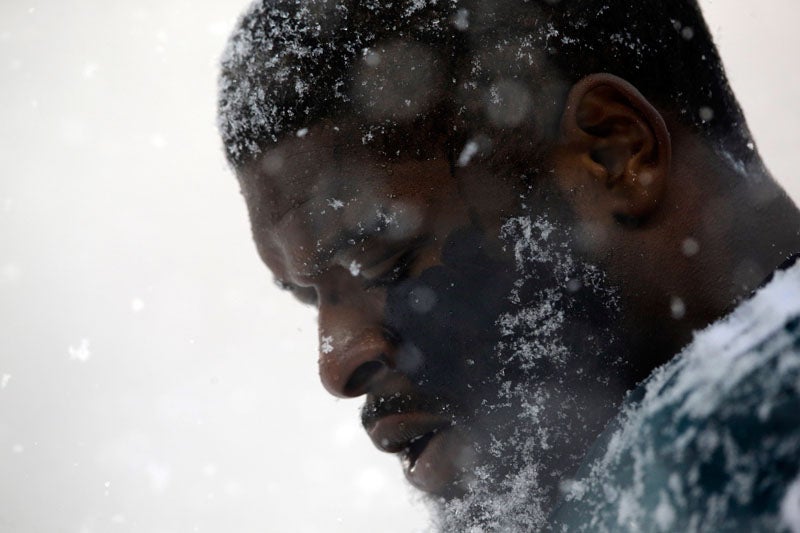 Philadelphia Eagles’ Antonio Dixon is seen during an NFL football game against the Detroit Lions on Sunday, Dec. 8, 2013, in Philadelphia. (AP Photo/Michael Perez)

Shooting an NFL game for a big agency seems like a high-pressure gig in itself. Doing it under such difficult conditions must be nerve-racking.

It is. You have to make pictures. You have to move something. You can’t walk back into the room and say “I can’t shoot.” You’re out there doing a job. Everybody’s working under the same conditions, so you just do the best you can. You find a way to get it done.

Did all that moisture cause havoc for your lenses?

At one point, I was shooting something and I looked into my viewfinder and I couldn’t see anything. I turned the lens around and there was maybe two-inches of snow just caked inside the hood. The front of the lens was almost covered in ice. I had to take my hat off and wipe it down. And if you were wearing glasses, forget it. After about four frames, I’d have to take my head away from the camera so my glasses would clear up and I could keep shooting.

In my two other cameras, moisture got into the eyepieces. There’s a little space between the diopter and the actual viewfinder and everything looked all foggy. Then, I’d check the back of the camera and it would have perfect focus and correct contrast. I just figured I’d deal with cleaning the camera later [laughs].

Did you have any gear problems as a result of all that exposure?

I thought I was going to have battery issues, but there really weren’t any.

Today, the cameras seem to have dried out. I haven’t really shot with them today, but I cleaned them up and everything seems fine. Knock on wood [laughs]. 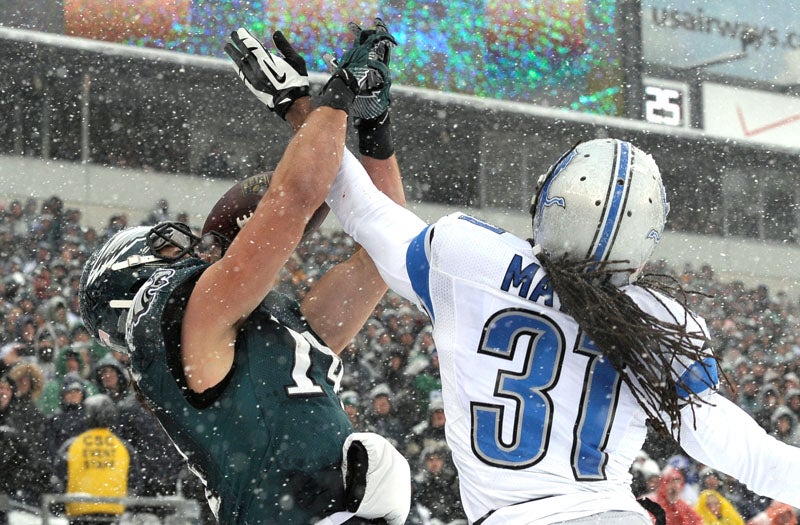 Is the weather-sealing on pro DSLRs enough to keep everything protected?

Moisture and fine sand find their way into cameras. You have to keep them covered up as best you can. Some people invest in expensive rain covers which are really nice. I saw one photographer had plastic wrap around his camera. He had wrapped it around his entire body and lens. I thought it was brilliant. He’s like, “It sticks to the camera and keeps the water out, but I can still see the viewfinder.” It was awesome. But, you see everything out there from garbage bags to expensive rain covers. You do what you can to keep your stuff dry.

What were you using?

I had a towel over my 80-200mm. Whatever camera I had slung over my shoulder would have inches of snow on it every time I’d pick it up to shoot. Sometimes you don’t have time to brush it off, you just have to pick it up and shoot. I had the towel covering the camera and it got soaking wet. By the third quarter is was just about frozen stiff, so I had to ditch it. I kept the camera under my jacket.

Have you had a chance to look through all the photos you shot? Are you happy with how they came out considering the circumstances?

I saw what went out live and I was kind of surprised with myself. There was one picture of a pass to riley cooper in the endzone, and I remember picking up my short telephoto and shooting it, but I didn’t know if it was in focus or not. I saw it pop up on the computer screen and realized it was the play where the ball hit him right in the facemask. I remember shooting it and thinking that I wasn’t even sure if the ball was in the frame. The outtakes have a lot of out of focus stuff. My first half has a lot of white frames where you just couldn’t see anything. I’m pretty happy with them, though. I got what I needed.

Was exposure a challenge?

Not really. You want to underexpose a little for stuff like this. If you overexpose, you lose your highlights. You can’t get them back because they’re not there. Detroit was wearing white uniforms, so I was underexposing ⅓ a stop and everything was fine. There’s just so much detail you get with these cameras. It’s amazing.

I have come close, but this has to be the worst one. At least it wasn’t freezing. I remember shooting during an ice storm in Green Bay, which was miserable, but this one you really couldn’t see.

Did you get any chances to warm up at all?

We came in at halftime and they were serving food. They had these trays with lids on them with burners underneath. Everybody started putting their gloves and gear on top of these trays to start thawing them out. In the second half, I had warm gloves…at least for a little while [laughs].