Yunghi Kim on Intimacy in Photojournalism 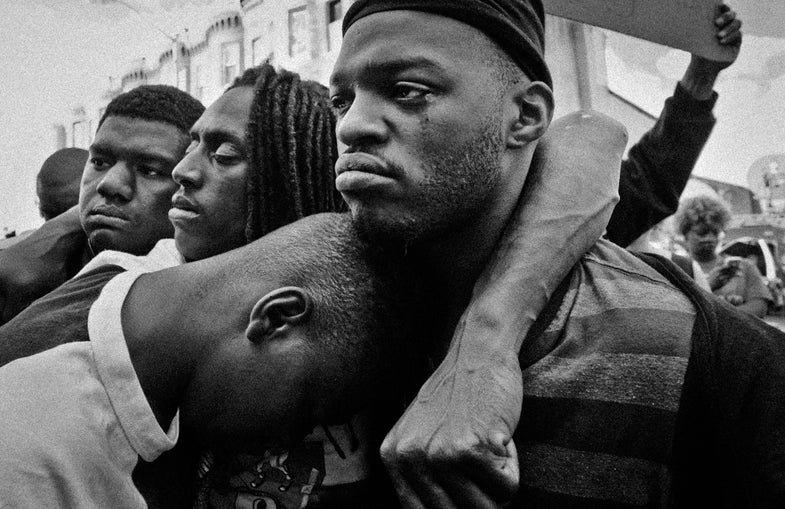 During the Freddy Gray protests in Baltimore last year, 30-year veteran photojournalist Yunghi Kim made an image that, for her, represents photojournalism itself. The photograph does not picture a climactic moment of, say, tear gas or confrontation. Instead, it depicts four black men embracing. A single tear runs down the cheek of the figure who is largest in the frame. Although the viewer is brought into the moment and the embrace, all four men ignore the camera. In this picture, Kim captures the tension between the strength and vulnerability of her subjects and manages a balance between the intimacy and distance of the viewer.

It is typical of her way of finding human moments while documenting challenging circumstances. “For me photojournalism is more than just taking pretty pictures or creating newsworthy moments,” Kim explains. “It is about studying people and their situations and making an image in the most human way possible.”

Indeed, Kim, who has photographed in places such as Somalia, Rwanda, Kosovo, and Iraq since she began her career as a student at Boston University, finds human moments in even the most inhumane conditions. In 2003, Kim went to Iraq. “The most stressful time for me is when I am packing—when I’m taking all the information in and contemplating leaving,” she says. “At these moments, I know that I will move away from the comforts of my home and into hostile environments. Sometimes I cry thinking about it, but then, as soon as I get to airport, I am fine. I am in the zone, and my love of photography takes over.”

A couple of days after the city of Kirkuk fell, Kim took a photograph of Saddam Hussein’s old bank on fire. “I was standing there taking pictures of the dramatic fire when a father and daughter with a cart full of metal scraps walked past. They looked at me with the most casual expressions, as if they had just gone shopping, but in the background there was a storm of black smoke.” The power of this image lies in the juxtaposition between the dramatic event and the human response to it. Kim explains that “this [juxtaposition reveals] the irony of war.”

Over the course of her career, Kim has seen major changes in photojournalism. The most obvious being the shift from analog to digital photography. Although she believes that in many ways technology has made photojournalism easier, she also says “it has made people sloppy. I see it in the endless slideshows [online]—publications put up 60 images in a slideshow just because they are going for more clicks.” The editing gets lost. But the editing, she says, “is part of the art form.”

Looking back on three decades of work, Kim is most proud of her series Comfort Women, which she shot on 35mm black-and-white film in 1994. In the series, Kim photographed four grandmothers who were forced to become sex slaves to Japanese soldiers during World War II. She recalls that she originally only shot 25 rolls of film of the women, and says: “If I had shot this project digitally, I would have made a lot more pictures, and I would have approached photographing differently. But in 1994, that wasn’t an option.”

Kim recently made a new edit of the series for publication, and when she returned to the work she was initially frustrated by the number of pictures available for her edit. “I think digital [cameras] allow photographers to get deeper into their stories,” she explains, “ Photographers can shoot more freely and don’t have to worry about the cost of each picture.”

For Kim, sometimes the quiet moments, such as the ones she found while taking the portraits of her South Korean Comfort Women or the quartet of men in the midst of protest, are the most challenging to capture. “I am able to establish an intimacy with my subjects,” she says. “That’s what photojournalism is about, whether you shoot digitally or on film.”

On Tuesday, January 12th at 7:00 PM, Kim will share her work in a lecture at the School of Visual Arts. The lecture is free and open to the public.