See the source photos of a master photorealist painter 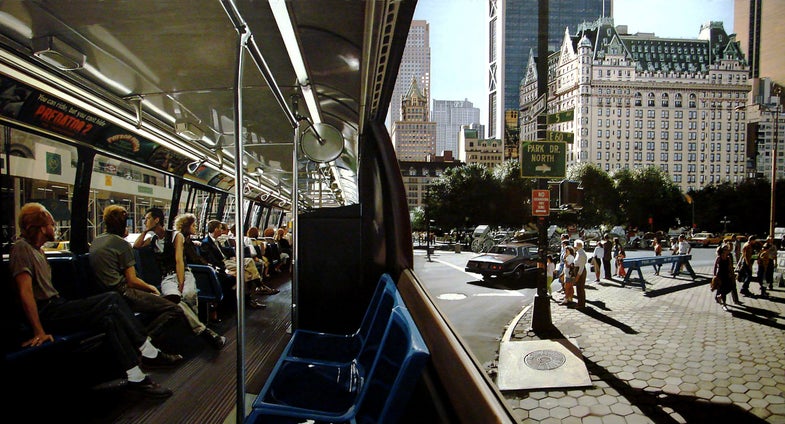 At the advent of photography, the anxiety of the the painter was that their craft had been rendered instantly obsolete. Surely, one might have thought looking at an early glass plate negative, no human hand could outdo what the machine was designed to perfect. Painting took a new direction, conveying distorted impressions, expressing emotion in ways which the machine hadn’t yet been put to use. The hand grew heavier and eventually found itself painted into the corner of a black square.

At that moment, around the middle of the last century, emerged a new movement of photorealism, not only approximating the visual fidelity that a camera could capture, but in certain cases, until recent technological developments, even surpassing its limits. The name Chuck Close may come to mind, particularly for photographers familiar with his later work in daguerreotypes. But among the leading figures driving and setting the bar of the movement was Richard Estes, whose exhibition “Painting New York City,” on view at the Museum of Art and Design through Sept. 20, 2015, dives into his process over five decades of urban photorealism through fascinating source photographs, proofs, and art-making tools.

According to curator Patterson Sims, what sets Estes apart is that he is not simply copying the photographs he makes himself, which we get to see here for the first time; he doesn’t overlay a grid and transfer information onto the canvas block by block like his contemporaries. His paintings are “depicted in a way that we’d call photographically precise, but Richards not a photorealist painter, he’s a photo-derived painter,” Sims says. “He uses them as an impressionist painter might use the landscape.”

Estes’ compositions, color sense, and eye for impeccably rendered reflections, remind of the photographs of Saul Leiter [particularly slide 2 above], who unsurprisingly was renowned as a painter first. Ultimately, Estes describes himself as “just an old-fashioned artist.”

“Abstraction is sort of a foundation for painting but it’s really not enough,” he says in the video below. “You can’t make any mistakes in abstraction, you can’t do a bad drawing in abstraction. But in realism, it has to be right.”