In a world where digital after-effects routinely underpin stunning photographs, Erik Madigan Heck is an anomaly. Though many of his... 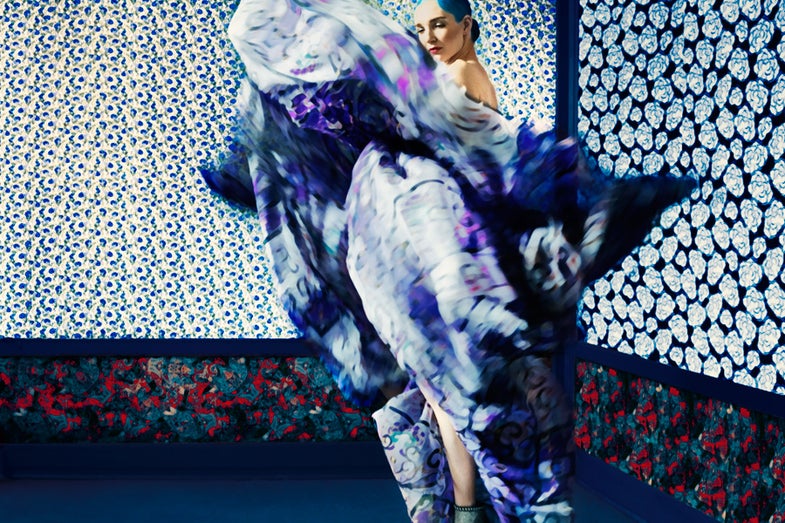 In a world where digital after-effects routinely underpin stunning photographs, Erik Madigan Heck is an anomaly. Though many of his images—shot for high-fashion clients such as Comme des Garçons, Rodarte and Ann Demeulemeester—appear to be altered in Photoshop, they are almost always souped up the old-fashioned way—in the camera or the darkroom. Take the colors in the photo for British designer Felicity Brown (seen on page 22). “I shot in the New York Botanical Garden and in the darkroom added a gel everywhere but on the model so that the forest went red,” Heck says.

From the start of his career, prior to receiving a master’s in photography, film and related studies from Parsons the New School for Design, the towering 28-year-old knew how he wanted to proceed. “I moved to Paris, met some small designers and began shooting directly for them,” he recalls. “I wanted to cut out the middle man and be the art director as well as the photographer.”

Heck’s working methods also demonstrate his independent streak. He eschews strobes and rarely shoots digitally. He even pooh-poohs test Polaroids, which would help ensure the usability of images captured with his 15-year-old, all-manual, 35mm Canon EOS 630. “I show up for a job with just a little bag,” he says with a smile. “Some people get nervous, and some people think it’s funny. I tell people that they’re hiring me because they know my work and they shouldn’t mess with my shtick. I also remind them they’re saving money because I don’t roll up with 1,000 lights and four assistants.”

Still, shooting without a digital safety net has its dodgy moments. He recalls one from an assignment for designer Haider Ackermann in Florence, Italy, inside the 17th-century Palazzo Corsini. During the shoot, clouds rolled across the Tuscan sky, changing the lighting conditions every 10 minutes. “I was a little scared,” Heck admits, “because they had flown me halfway around the world. But I like that suspense.” He feels the lag required for developing and printing film is also a positive. “I think it’s good for the client to wait two days before seeing images,” he says. “By then they have disassociated themselves from the day of shooting and look at the photos more clearly.”

Despite his penchant for low-tech detailing, Heck works hard to keep darkroom razzle-dazzle from defining him. Instead, he tries to be a chameleon, crafting each shot to the client’s needs. This approach has led him to solarize a portrait of artist Gerhard Richter, to flip and manually rebuild a still from La Traviata for the Metropolitan Opera and, for Japanese designer Jun Takahashi, to create an updated take on Weegee’s famous crime-scene photos—complete with smears of fake blood and real bullets narrowly missing pricey sneakers and pants.

Pressed for more details about how he juices his shots, Heck politely demurs in the interest of maintaining the mystery. “But I will say this,” he allows: “It is not as hard as it looks. And it’s more fun than Photoshop. It’s more of a science experiment.” AP