While You Were Out: Richard Ross’ Girls in Justice

Richard Ross has devoted the past five years to an exploration of the growing problem of imprisoned young people, creating... 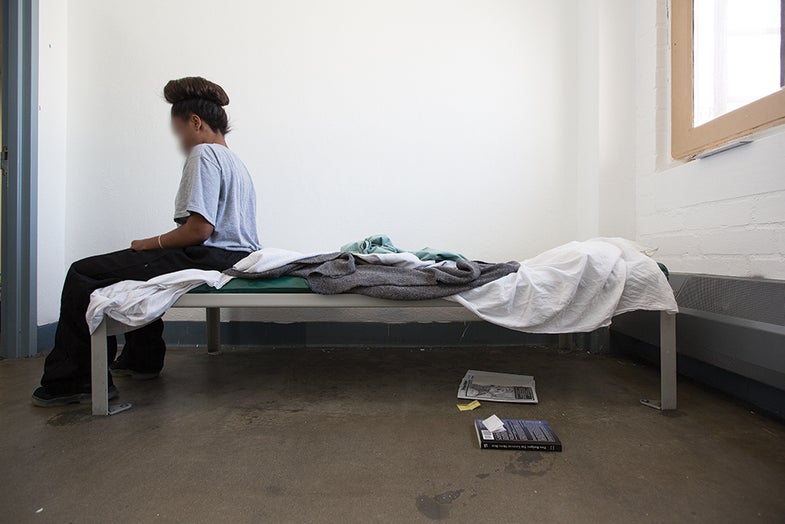 My mom is deceased. Drug overdose. I stayed with my auntie until I was 11 in Compton.  She was abusive, verbally and physically. I went to maybe 15-20 foster homes. They were all ladies, no man in the home. My baby is one. His daddy’s family took him to Vegas to see his daddy. He wouldn’t give my baby back. The baby was in the hospital with a lung problem. I asked my social worker if I could go to see my baby. She said I had to wait until my next court date in two months to see the judge. So I went AWOL to see my baby. They picked me up and now I am 241.1—dual custody between dependency and delinquency for going AWOL. I just wanted to see my baby. I like Miss Perez. All the staff here just order you. Miss Perez (C.O.) talks to me.   –T.L. age 16.
SHARE

Richard Ross has devoted the past five years to an exploration of the growing problem of imprisoned young people, creating portraits of them in detention facilities across the country. He presented this work in 2012’s award-winning book Juvenile in Justice, which featured 150 portraits and interviews with their subjects.

A second volume, Girls in Justice, is due out in January 2015. “As the project evolved, I realized that the children in this system aren’t all just small adults in orange jumpsuits,” says the photographer. “The girls experience incarceration differently from boys.” Getting into facilities was tough, and Ross was not allowed to name the girls or show their faces—which is why, in most of the images, his subject turns away; he blurs those that would have contained a recognizable face.

Ross is comfortable with this limitation. “I don’t want these kids having an image come back to haunt them,” he explains. He also feels that the absence of an identifiable face makes the images more universal. “I want someone to feel that it could be herself, or his or her own daughter, or any kid they might know whose normal adolescent behavior has been criminalized,” he says.

When Ross first meets his subjects, he sits on the floor of their cells. “I spend about an hour taking notes,” he says. Ross’s interviews confirm the circumstances, typically beyond a girl’s control, that landed her in detention. At the end, he says, “I cry. These kids are heartbreaking. But it’s a privilege to have them trust me with their stories.” And the stories are crucial—excerpts from the interviews accompany each image as its title.

While an art critic might make much of the connection between Girls in Justice and earlier projects such as the Guggenheim-funded The  Architecture of Authority (spaces that “exert power” over people), or Waiting for the End of the World (post–Cold War bomb shelters)—and the way in which they show how fluid the line between security and captivity can be—the photographer’s objectives are more altruistic. “I’m more interested in changing the way we treat kids,” says Ross. Girls in Justice will hang this fall in the rotunda of Washington, D.C.’s Russell Senate Office Building, where, he hopes, “policy makers see it and it moves the discussion forward.”

Richard Ross is a professor at University of California, Santa Barbara.