When Photographers Become Filmmakers: Katy Grannan on Making ‘The Nine’

"I was ready to be a beginner at something again." 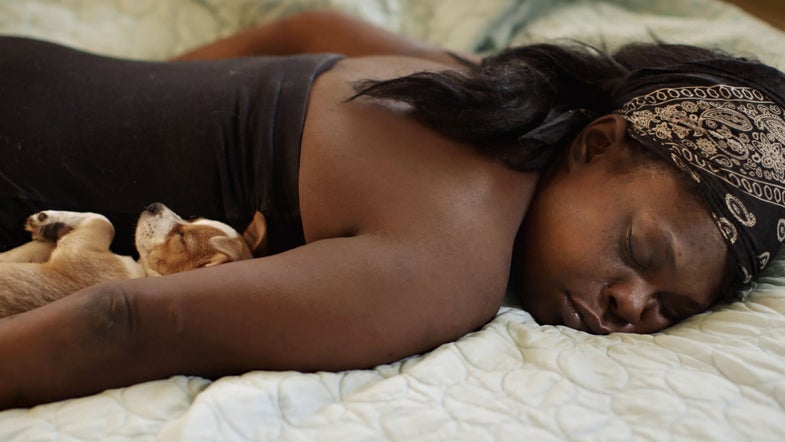 Photographer Katy Grannan recently completed The Nine, a feature-length film in which she continues to document the people she covered in her 2012 –2013 black-and-white eponymous photo series. The “Nine” refers to a few city blocks on Modesto’s South Ninth Street, where Grannan’s subjects live on the margins of society and life. She includes a number of them in her film, but she focuses on Kiki, a loner with a huge imagination, troubled past, and problematic future. The Nine will be screening at the DOC NYC film festival next week.

Why make a film?

I’ve been making photographs for a long time, and I was ready to be a beginner at something again. I’d thought about how to incorporate film or video in the work since the very beginning. Photographing people is a surprisingly intimate window into people’s lives, and while a photograph becomes an iconic moment in time, it can’t quite convey the energy or the personality of the people I’ve photographed. Around the time I started The Nine, my oldest friend in the world, who had been on the street for all of her adult life, died. She’d lived exactly like the women on the Nine, so I felt I knew them in particular. I couldn’t make a film about my friend Heather anymore, but I felt this was the right time to work with other people to tell their story.

The film focuses on Kiki. On your website, you describe Kiki as someone “whose precarious sense of self-worth hinges on the making of the film.” Didn’t that put a lot of responsibility on you as the filmmaker?

Whenever you involve other human beings in your work, you always feel you might betray the people who’ve put their faith and trust in you. With Kiki it was much more pointed and dangerous, because this film became her reason for being. With the film, she was seen and heard, and she’d never been seen or heard her entire life. The fact that anyone cared was shocking to her, so she began to depend on me and also on the process of making this film.

Kiki and I are still extremely close. I talk to her all the time. It’s complicated at the same time, because we lead very different lives, and there’s nothing I can do about it. Whenever I show up without a camera, Kiki laments, “Where’s the camera? I miss the camera.” Yet at some point the filmmaking has to end.

What’s the difference between shooting still portraits and shooting a film?

You’d think filmmaking is a similar medium to photography, but they’re completely different. For one thing, cinema has audio, which is like another character. In the film, I included a lot of portrait-like moments that are very still, where I was interested in letting things play out, like a shot where a woman is sitting on the bed eating a popsicle. It’s more interesting than it would be as a still photograph because you hear the crinkling of the paper, then she’s disrupted by music. As a still photograph it’s not nearly as interesting. There’s a lot of uncertainty in the way I make photographs, but the form is often quite specific, at least with portraits. With the film I started to feel like I was seeing in a new way, which messed with everything I’ve been doing for fifteen or sixteen years but in a good way.

With still photography, the consumer controls how much time he or she spends with a particular image. But with cinema, the filmmaker controls that time, either through editing or the evolution of a shot. Was that hard to get used to?

In the majority of films—or at least Hollywood films—we’re entertained by action and quick cutting, which appeals to our short attention spans. With The Nine, I didn’t want you to be entertained by the fact that there’s so much suffering. I wanted you to experience it and to experience people, and that involves spending time. It involves sitting with people.

I wasn’t interested in making anyone fall asleep, but there are moments like the woman with the popsicle, where you almost get to the point where you think, “We’re ready to move on.” I was really aware of moments that deserved a quiet amount of breathing room. Many filmmakers make much slower, thoughtful films, like Chantal Ackerman’s From the East. It’s a photographer’s film, almost like a living Garry Winogrand photograph. It deserves quiet observation and patience. The world’s pretty interesting if you slow down and pay attention.

Were there any particular aspects of filmmaking that surprised you?

I had no idea how incredibly difficult it is. There are infinitely more variables than with still photography. There’s so much organization, and it’s very tech heavy, especially with a verite film like this, where you have a lot more footage than you would with a strictly scripted film. I had no idea of the degree of creativity that’s involved in editing. It’s astounding, unless you’re editing a very tightly scripted film.

Editing is where you make the film, particularly in documentary.

It’s why I hate the term documentary film, because it’s so misleading. It is not objective; it is absolutely made and shaped and intentional in every way.