On the Wall: Into the Wild with Rinko Kawauchi

Rinko Kawauchi’s 2011 book Illuminance made her one of Japan’s best known photographers. The softly brilliant colors she brought to... 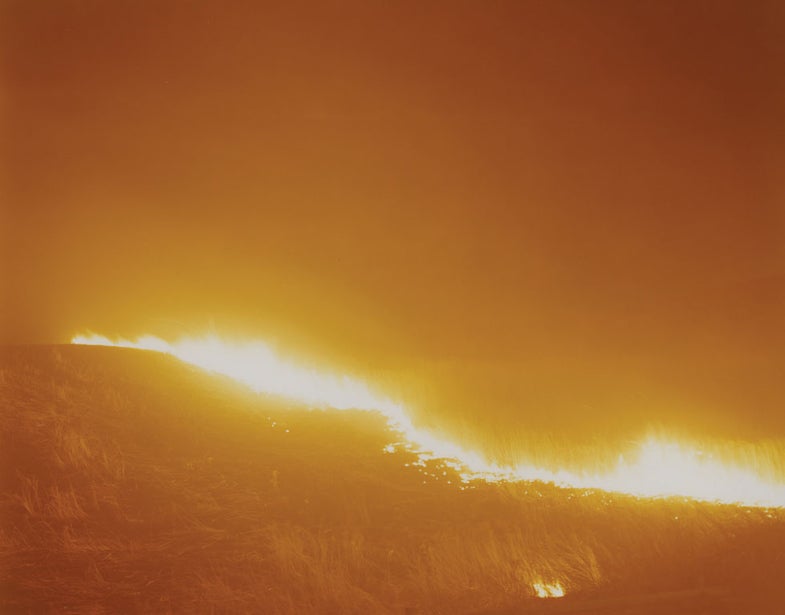 Rinko Kawauchi’s 2011 book Illuminance made her one of Japan’s best known photographers. The softly brilliant colors she brought to the book’s close examinations of everyday moments showed a mastery of transforming the mundane into something breathtakingly new.

It’s interesting, then, to see her perspective shifting dramatically outward in Ametsuchi, her latest book and exhibition opening at New York’s Aperture gallery this week. Ametsuchi is concerned with the greater natural world, and our relatively infintesimal place in it. The primary subject matter are burning fields, shown cycling through the traditional process of nokayi in which controlled burns done at specific times keep farms fertile for periods spanning decades and generations. Interspersed are views of the stars, looking straight up, and depictions of religious rituals back on Earth. Woven together, the work presents a dramatic story of regeneration and rebirth.

In the book, the images are presented with careful consideration to narrative. We see large full-spread images of burning hills, interspersed with smaller views. One perfectly rounded hilltop is seen through the changing seasons and agricultural cycles, like Monet’s piles of hay. Humans play a supporting role, but they are never far away. I’m interested to see how this narrative approach translates to the exhibition space.

Ametsuchi is up in New York’s Aperture gallery until November 21, 2013. The Book, also published by Aperture, is available now.