On the Wall: Kurt Cobain by Jesse Frohman

To mark the eighteenth anniversary of Kurt Cobain’s death, the Morrison Hotel Gallery in New York City has put up... 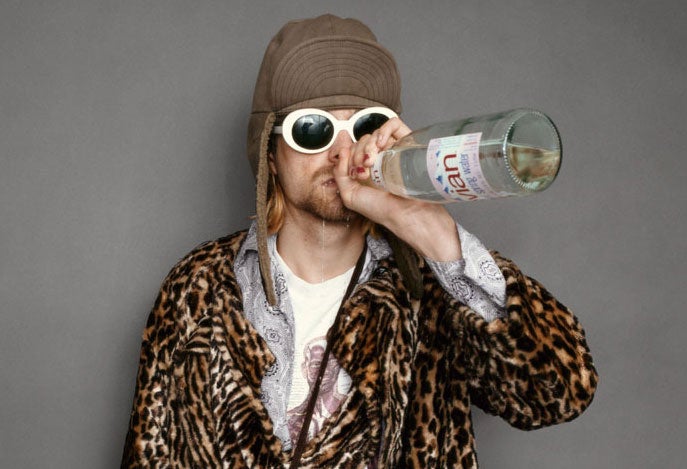 To mark the eighteenth anniversary of Kurt Cobain’s death, the Morrison Hotel Gallery in New York City has put up some of the last professional photographs ever taken of the grunge icon just five months before he died—the first time this body of work will be shown as an exhibition. We caught up with celebrity and still life photographer Jesse Frohman for the back story on the iconic photo shoot that immortalized the last days of the musician.

Lindsay Comstock: Tell me how this shoot transpired.

Jesse Frohman: I was commissioned by The Sunday Times magazine of London to shoot Nirvana. They were going to be in New York performing at the Roseland [Ballroom]. This was at the end of ’93, about five months before he [Cobain] died. The shoot was scheduled to take five hours and I had a location set up in advance. But when I arrived at the hotel I was told by his manager that I had to nix all the plans. We would have only a small window of opportunity to shoot him and the shoot would have to take place in the [Omni] hotel. This had happened before with celebrities, but we didn’t think it would be so short. We thought we would have a couple hours, but by the time he came down from his room we only had about 20 minutes. There was a lot of waiting and then it was a ‘wham, bam, thank you ma’am’ kind of shoot. Then I was invited to Roseland and took a few more shots at their rehearsal and concert.

Were you concerned you wouldn’t be able to capture him with the time constraint?

I felt like I did the best I could do with what I had. When I looked at the film the next day, I realized I had a real gem. It was a blessing that they cancelled the location. The [shots] wouldn’t have been as iconic had I stuck with the original locations I had picked.

What was your experience of Kurt Cobain as subject?

It was the first time I had met him. The other guys [Nirvana] had showed up on time—and Kurt came down about three hours late. He was really stoned. He was oddly very aware and present and out-of-it at the same time. He was very friendly and expressive. He let me do whatever I wanted to do. He was very comfortable and relaxed (obviously). He was very easy to photograph—he was so open and not worried about what he looked like.

It doesn’t sound like the conditions of the shoot were favorable.

Once in a while you get a shoot that just works out as if there is magic in the air. This was one of those shoots. I was planning for a location shoot, so I had all my equipment, but something told me before I left to throw a seamless and lights in the van. So I was fine to set up a studio in the [hotel] conference room. Even though I was pressured to get pictures in 20 minutes, believe it or not, in those 20 minutes I took my time. I only shot about 6 or 7 rolls of film.

Did you work with a stylist on this shoot?

Sometimes I work with one because some bands need it or some bands request it. But I’ve always preferred to do my portraits with people as they are. I’ve done a lot of celebrity photography [with hair and makeup] but for this kind of thing, we didn’t use a stylist. He [Cobain] brought the sunglasses and hat himself. That’s all the fashion he needed.

How do you feel now that these images have become so iconic (in part) because of Cobain’s subsequent death?

I am very appreciative to Kurt. I owe it all to him. I think all shoots are a collaboration. It was one of those odd collaborations for sure (because of the condition he was in) but it was a wonderful collaboration nonetheless. He and the other band members were very easy to be with. I was very surprised that these pictures became as famous as they did.

Right after his death, many publications approached me but no one ran my pictures as a cover because he was wearing sunglasses. So I never thought there was real value for the shots. But in the last eight years I’ve made them available for collections and exhibitions.

Much of your early photographic training came from assisting Irving Penn. How would you describe his influence on your photographic style?

I definitely learned how to take a portrait once I met him. The biggest thing I learned from Penn is how to see—and that is by no small measure something you can learn anywhere. It was on every level: technical; how to see light; how to see form; and what makes a good picture. Once I got that in my blood, I was able to recognize when I have the shot, when I have something special. I know when I am done. I learned things that I couldn’t have learned anywhere else. He was a true master [Penn]. I don’t think my work is anything like his. If anything, my work is more akin to Richard Avedon’s [portraiture]. I think only Penn could do Penn—and anyone who tries to do Penn usually fails miserably.