On the Wall: How Photographers Envision Human Rights

There is a flood of gory photos coming from conflict zones around the world today thanks to advancements in digital... 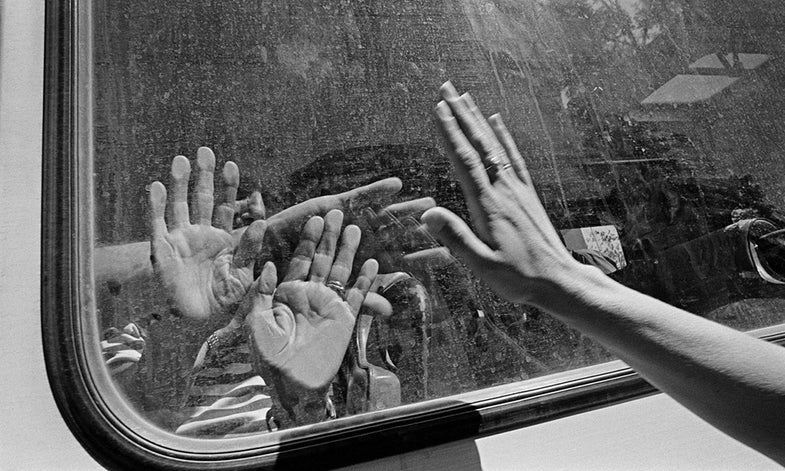 There is a flood of gory photos coming from conflict zones around the world today thanks to advancements in digital imaging and connectivity. These photos, increasingly made by perpetrators of war crimes themselves, serve to reveal injustices; yet increasingly it seems that their function has been to excite. More than ever, it’s important to filter and withhold a particular representation of atrocity, in favor of another, more nuanced image. It is with this in mind that Pamela Blotner approached curating “Envisioning Human Rights,” an exhibition on view through the end of October at the Human Rights Center at UC Berkeley School of Law.

Now celebrating its 20th anniversary, the HRC has made it a central tenant to look for powerful imagery to promote their cause. “Images which are resonant, which convey deeper context,” says Blotner, a visual artist and educator. As curator, she shares a personal connection to the kind of work featured in the show and defines her own seminal experience as being hired by Physicians for Human Rights in 1997 to document with courtroom-style illustrations the exhumation of mass graves in Croatia and Bosnia. “We looked for people whose work had that quality of being technically beautiful, riveting, but very, very meaningful.”

The exhibition includes legendary documentarians Susan Meiselas, Gilles Peress, Sebastião Salgado and seven others, with work spanning four decades, filed from the gold mines of Brazil and the farmlands of the American South to the sites of genocide in Africa, Central America, Europe, and elsewhere.

Many of the photographs included are devastating, but also beautiful, almost unsettlingly so. “When a fine artist makes art of a catastrophe or somebody else’s tragedy,” Blotner tells American Photo, drawing on her first-hand experience having illustrated such scenes, “there’s always the fear that it could be exploitive.”

Most of the featured photographers have long relationships contributing to the HRC. Every photographer in this exhibit Blotner says, “is someone who doesn’t just parachute in, but someone who has spent a lot of time and energy and investment into being there.”

“Without showing explicit violence,” images like Thomas Morley’s ‘Acholi Boy with Toy Gun’ (slide 16), “shows potential for violence and lives being wrecked.” Susan Meiselas’ photograph of a widow contemplating the bones of her relatives at a mass grave in Iraq (slide 6), undoubtedly one of the most difficult to look at of the set, is nonetheless compelling for it’s ability to convey “beauty and dignity and resilience.”

All the work in the exhibition is available for purchase until Oct. 13, 2014 at which point it will be auctioned online via Paddle8. All proceeds go back to support human rights causes, which nonetheless raises a number of questions. Do pictures of mass graves belong in a private collection, on a wall, in a home? What kind of person might buy a collectable print representing a mass grave, and what might they do with it?

“I can’t imagine photographs like those hanging above a family’s dining table,” says Blotner, “but they might be in some quiet room where individuals would go to meditate, to think about these things and to feel the privilege of being alive and being able to contribute toward preventing them.”

“Envisioning Human Rights” will be on view at UC Berkeley School of Law through Oct. 31, 2014, open to the public Monday – Friday, 8 a.m. – 6 p.m. For more information visit EnvisioningHumanRights.com.