On the Wall: Edward Burtynsky’s Oil

The visionary work of photographer Edward Burtynsky provokes action, but not necessarily by design. His photographs are large-scale color images,... 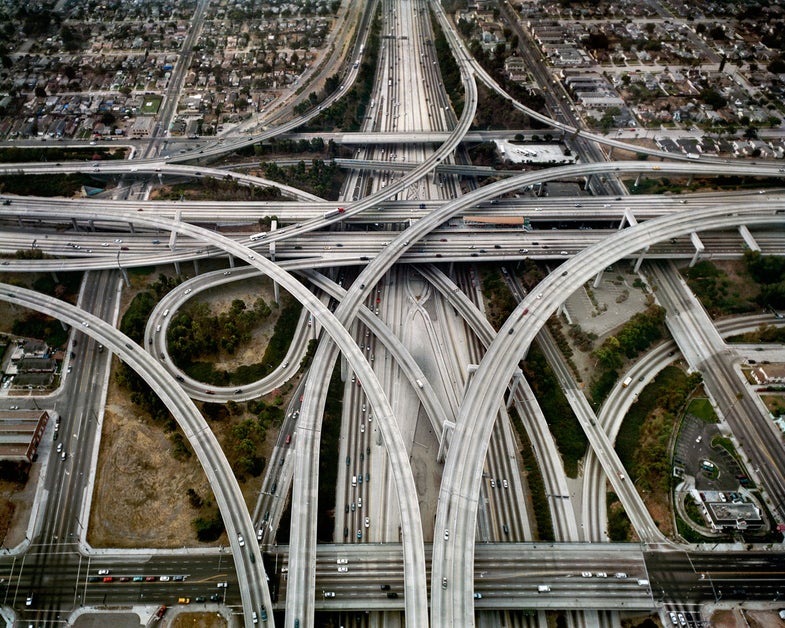 The visionary work of photographer Edward Burtynsky provokes action, but not necessarily by design. His photographs are large-scale color images, that, in looking at the landscape as a system, are visually astounding. Even beautiful. As beautiful as industrial, oil-saturated landscapes can be.

The Canadian-born photographer’s images are topographical studies of the way in which human engineering and industry have effected the natural environment. Stepping back from these stunning images, you realize that the movement, the systems of roads and canals, the skyline marred by towers that have wonderfully caught the sunlight, the patterns made by jet planes and criss-crossing overpasses—are all inextricably connected to an underlying force: oil.

“Edward Burtynsky: Oil”, now on view at the Nevada Museum of Art, is a survey of 50 large-scale photographs on the subject, taken from a decade of work (1997-2009). The exhibition chronicles the life-cycle of oil production, taking into account all aspects of its influence on our lives: from production, to urban sprawl and the car culture, to the end of the line where workers clean up the mess from retired oil tankers at a “recycling” center.

Like Naoya Hatakeyama, Burtynsky seems to take a removed approach to looking at the way humans have effected the environment, showing us instead the subtle beauty in what society has built, allowing us to decide how to react to the images. Perhaps they are a powerful call for us to see the world around us for what it is. Perhaps he wants us to contemplate how we have used a resource from the earth to obscure and degrade the natural environment. The photos stand is as documentation of truth.

Burtynsky’s desire to photograph the cycle didn’t come out of the blue: when he was a child, he was said to have played in Canada’s Welland Canal, watching the ships pass by. And his father worked on the production line of a General Motors plant. His career has primarily focused on the subject of landscapes altered by industry–including mining, dredging, and the railroad. The photographer has been bestowed with many honors for his work including the prestigious TED Prize in 2005 and four honorary doctorate degrees.

“Edward Burtynsky: Oil” is a traveling exhibition originating at the Corcoran Gallery of Art in 2009. This is the first time it has been reexhibited in the US after touring in Canada over the last three years. It is on view through September 23.