Shore journeys to the Ukraine to explore the culture photographically 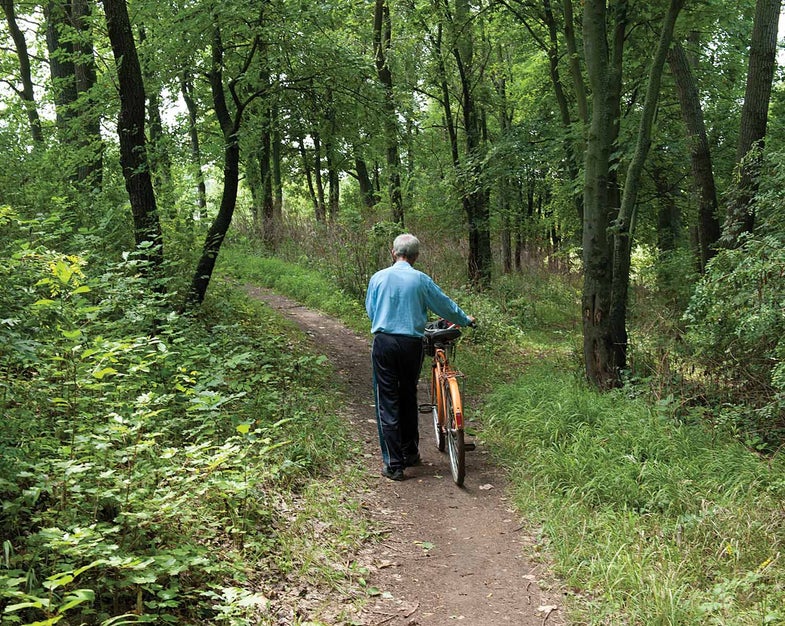 Ever since his unofficial apprenticeship at Andy Warhol’s Factory in the mid-1960s, Stephen Shore’s career has been defined by his constant search for new photographic questions to answer. In the process, he has pushed boundaries and squashed conventions. From helping to usher color into art photography with the series American Surfaces (1972–73) to challenging it with a number of black-and-white projects throughout the 1990s, the visual vocabulary he developed has become integral to how we see America in particular and photographs in general.

Fast forward to 2012, when a personal question sent him abroad. Inspired by the Survivor Mitzvah Project, a Los Angeles–based charity that helps people who fled Nazi persecution to Eastern Europe and Russia, he took his camera to Ukraine. His paternal grandfather had emigrated from there in the 1890s—a personal connection to his subject that marked new territory for the photographer.

“My wife said this would be a great subject for me to photograph—and she was right,” Shore says. The resulting book, Survivors in Ukraine (Phaidon, 2015), depicts the ordinary lives of people whose extraordinary escape from the holocaust has ironically left them impoverished and isolated.

We asked Shore, the Susan Weber Professor in the Arts and director of the photography program at Bard College in Annandale-on-Hudson, New York, to walk through a few of these images, and offer us a master class on how to see light, structure a photograph, and create images with subtle emotional power.

An overarching question for Shore in Ukraine was this: “How could I take pictures that didn’t depend on the associations people would have with [the holocaust], but at the same time not ignore it? For many years I stayed away from subject matter that had an obvious emotional charge,” he says. “I found Ukraine to be, for me, a very emotionally charged place. It was kind of in the air, it lingered for me, and I can’t tell if it’s something about Ukraine or something about my family history there, or a combination.”

He visited twice, in the summer of 2012 and the fall of 2013, and before his second trip, he says, “I wondered, ‘Is the same kind of feeling going to wash over me again?’ And I found it did, as soon as I landed. So I think the openness to a certain emotional level in the picture is different.”

To be fully open to new possibilities in content, strong technique is an essential resource. For Shore, who dedicated all of the 1970s to intentionally, methodically experimenting with every formal variable in a photograph, the technical considerations of making a picture have become second nature. “At some point you get a handle on it,” he says. “It’s like if you were a baseball player and you’re playing the outfield. Someone hits a fly ball, you can’t think about the trajectory of the ball and how fast you have to run to be able to intersect with it and catch it. At some point your muscles have developed a kind of memory…from hours and hours of practice. And you just do it. At a certain point it comes naturally, after years of experimenting.”

Lesson Three: Use the Right Gear

Shore shot “American Surfaces” with 35mm. Finding the color negative film at that time not sharp enough to make prints as big as he wanted, he switched to 4×5, and later 8×10, view cameras. But even those came with frustrations, mostly of the ‘this gear is too damn cumbersome’ variety. “What I was really looking for was a 35mm camera that could take a picture that was as sharp as a 4×5, that had the same tonality and crispness,” he says. “But it didn’t exist. Well, now it does.” (Shore used a Nikon D3X for his first set of Ukraine images and a Nikon D800 for the second trip.)

Shooting digital in Ukraine opened up creative possibilities that Shore would not have had with a view camera. “I could think about taking pictures in places I could never think about taking pictures before,” he says. The interiors there were often extremely dark, and he bracketed many of his photos, combining an exposure for the highlights, an exposure for the midtones, and an exposure for the shadows. Sometimes he was photographing in rooms so dark he had to bring in extra light just to focus the camera, as in one image from the book of a bed with lace pillow covers. “That was a room with very, very little light, and I think it would have been, maybe not impossible, but really difficult to have taken that picture with film,” he says. Yet in that picture the light looks fine.

Shore found himself embracing digital for portraits, too. “I could do these portraits with a view camera, but the speed…with the digital camera becomes less of an imposition on the sitter,” he says. “That changes their emotional state when the picture is being taken. It changes the degree of cooperation that’s necessary on their part.”

Shore’s images often take in a scene in a way that appears organic rather than didactic. In a photo of children playing on a swing set, for example, we barely see that swing set, but once we look at it, it becomes a focal point.

“If I were shooting this with a 35mm film camera, the swing set would get lost in the picture,” Shore says. “So if I wanted to show the swing set I would have to get off the balcony where I took this from and take a closer picture of it. That picture would say, essentially, ‘Look through my eyes, and look at this swing set.’ Or ‘Look at this swing set; it is worthy of your attention.’” Instead, he says, shooting with the Nikon D3X means that swing set “can be one of a number of points of interest. So that the viewer, instead of being directed, is given a small world in which they can explore…which is so much better than my saying, ‘Look at it.’”

While the still lifes in this series at first look quite different from the other exteriors—more stark, less lush, less inviting to the eye to explore—they actually are built on similar principles, reading with a level of detail that invites the viewer to roam the image. “Even if there’s a single dominant subject—the gourd on the floor, for example,” says Shore, “I can also rely on the descriptive qualities. You can look at the newspaper; you can look at the tear in the wallpaper. Where the painted floor is wearing out. The ads on the newspaper. These descriptive things hold the picture.” This way of designing a photograph so that the subject can simply be, free of the photographer heavy-handedly guiding the viewer, is a defining quality of Shore’s work. “I don’t have to hit you over the head with something, because I know I can rely on the camera to describe it very clearly,” he says.

A self-directed student without a formal photographic education, Shore spent his early career examining structural variables, asking questions, and putting solutions to the test in different situations. This was not a merely intellectual exercise. “I’m thinking about exactly where I’m standing,” he says. “If I move an inch to my left or right, the space in the picture changes.”

He found this experience to be such an effective way to hone his craft that in their first two years, Shore’s students shoot only film. The physicality of loading film and processing images in the darkroom instills an embodied learning that he believes is difficult to achieve in the virtual world of DSLRs and Photoshop.

“When you go into the darkroom and say, ‘These highlights are a little too bright,’ and then you go and make a new print, you learn to see light,” he says. “When you use a camera and a tripod and decide, ‘I want to move this two inches to my left,’ and you pick it up and put it down, just going through that physical activity makes that decision more visceral and clearer and more conscious than if you held the camera up to your eye and swayed a little bit to your left. You learn, in a more visceral way, photography.”

Read more profiles like this by downloading the full issue of Popular Photography On Campus or going to PopPhoto.com/Campus