Turning Photos Into Paintings, By Way of the Web

Sometimes I like to view the internet as one big, infinitely-faceted image filter. Photos enter at one end, as light... 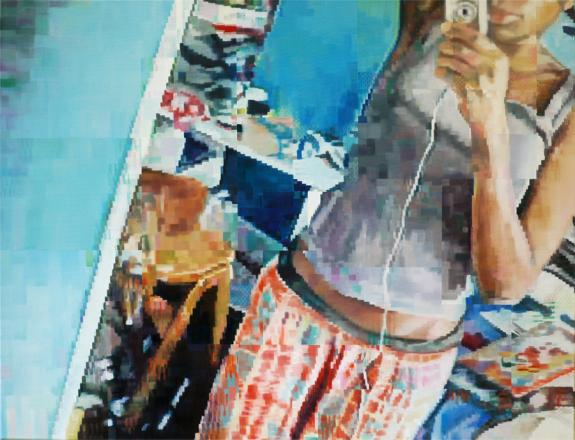 Sometimes I like to view the internet as one big, infinitely-faceted image filter. Photos enter at one end, as light turned into bits by a digital sensor. From there, the number of transformations that can happen before output, when the image, (again in the form of light) enters the eyeballs of the viewer and gets soaked up by the brain, is seemingly limitless. (It’s still shocking to me sometimes to stop and think about how incredibly similar the mechanics of digital photography are to our own biological sense of sight). Contexts can be added or taken away as images make their journey through the web, taking on different meanings and tones at every turn. On the excellent Rhizome blog today (by way of the Tumblr Prosthetic Knowledge), I came across the work of painter Enda O’Donoghue, and it got me thinking of all the layers of information a photographic image can carry today, and what happens to them when they take shape in another medium entirety.

Why would we be talking about a painter on American Photo? Because photography is arguably more important to O’Donoghue’s work than painting itself. Yes, Chuck Close and his grid paintings based on photographs seem like an influence or inspiration. But where Close used photography as a starting point to do interesting things with painting, O’Donoghue, to me, is using painting to say interesting things about photography, even though oil and canvas is the output medium of choice.

His sources are a wide variety of images usually seen only in digital contexts, including mirror self-portraits, shots of foods about to be eaten, and scenes from public transportation resembling security camera footage. The images are rendered on canvas in a way that recreates digital-only signifiers like jaggy low-resolution edges and squares of distorted colors from JPEG compression—all the signs of digital glitch that are often lumped under the term “new aesthetic.” While I always hesitate to jump on a lumped-in term’s bandwagon, I find myself repeatedly fascinated by work that looks closely at the moment digital signals begin to degrade.

The Rhizome post also points to two other artists recreating digital imagery in analogue mediums. Check them out and give them a follow if you don’t already—great stuff.