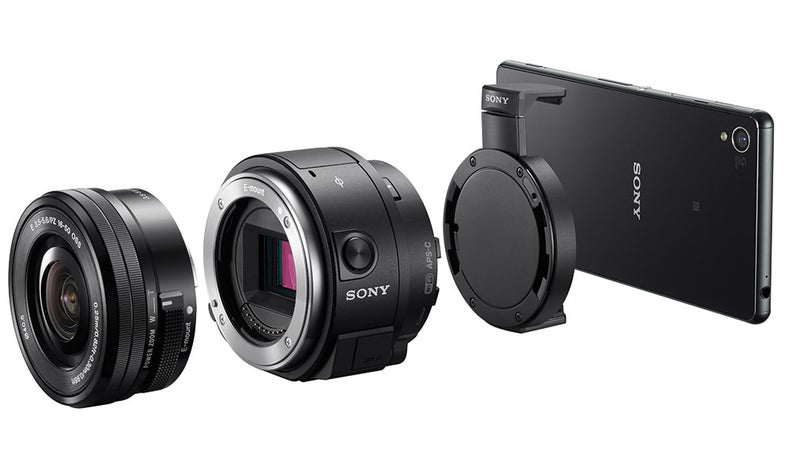 Compact Four Thirds
With its new Lumix DMC-LX100, coming in November, Panasonic squeezed a big Four Thirds sensor and 24–75mm (equivalent) f/1.7–2.8 optically stabilized lens into a very compact form. About 4.5 inches wide and less than 2.2 inches deep when off, the LX100 is the smallest camera in this sensor format. Panasonic kept the megapixel count modest at 12.8 but pushed its sensitivity to ISO 25,600 for low light. The biggest boast of all: 4K video capture.
Buy it $900; shop.panasonic.com

Clip-On Camera
The Sony ILCE-QX1 may look like an accessory lens for a smartphone, but this new device is actually the body for a whole camera system. The phone acts as a monitor and controller—whether it’s physically attached or linked remotely through Wi-Fi. Inside the QX1 is a surprisingly large 20.1MP APS-C-size CMOS sensor. Even cooler, Sony’s E-mount lets you swap lenses; alas, the glass is not included.
Buy it $400, without lens; store.sony.com

Solid Support
For shooting long exposures and steady video, a tripod is required gear in every photographer’s kit. And Manfrotto’s new 190X3 three-section aluminum model is a great place to start. Weighing less than 4.5 pounds and less than 2 feet long when folded, it reaches nearly 63 inches fully extended and can hold more than 15 pounds of gear; a ground-level adapter lets you set it crazy low. Heads (e.g., pan/tilt or ballhead) cost extra.
Buy it $200; manfrotto.us

Tough Mother
Ricoh’s WG-M1 is ready for action, with a rugged body that doesn’t need an accessory case to make it waterproof (down to 32 feet), shock-resistant, and freeze-protected (down to 14° F). Its 14MP 1/2.3-inch CMOS sensor captures stills or video (up to 1080p at 30 fps; slow-mo 120 fps at standard def) on MicroSD/SDHC cards. Built-in Wi-Fi allows for remote control from a smartphone, while a 1.5-inch color LCD on top lets you view images and manage settings easily on the camera.
Buy it $300; us.ricoh-imaging.com

A Mightier Pen
Olympus positions its Pen line of Micro Four Thirds ILCs as “lifestyle” cameras, compared with its more performance-oriented OM-D line. But the new Pen E-PL7 offers specs any photographer would appreciate. It has the same 16MP Four Thirds Live MOS sensor and three-axis image stabilization system as the OM-D E-M10, plus an 81-point autofocus system and 8-frame-per-second burst speed (3.5 with continuous AF). And its 3-inch, 1.04 million-dot LCD can flip down and face front for better selfies.
Buy it $600, without lens; getolympus.com

Back It Up
Protecting your images and other crucial digital files is one of those must-do chores that too many people neglect. Western Digital makes backing up easier with its My Passport Wireless portable hard drive. Besides Wi-Fi, you can connect through fast USB 3.0 or FTP via an adapter. There’s even an SD card slot and a smartphone app for sharing files straight from the drive. This versatile portable drive comes in 500GB, 1TB, and 2TB capacities.
Buy it from $130; wdc.com

Compact with a View
Its sensor—a 12MP 2/3-inch X-Trans CMOS II—is smaller than the one in the Panasonic Lumix DMC-LX100 (above), but the Fujifilm X30 provides something rare in a compact camera: an awesome viewfinder. Fujifilm’s is a high-resolution 2.36 million-dot OLED with an extremely fast refresh rate; there’s also a tilting 3-inch LCD monitor. The 4X zoom, with a 28–112mm (equivalent) focal range and f/2–2.8 maximum aperture, is optically stabilized.
Buy it $600; fujifilmusa.com