For many American university students and graduates, Greek life is an almost inescapable part of the campus experience. But for... 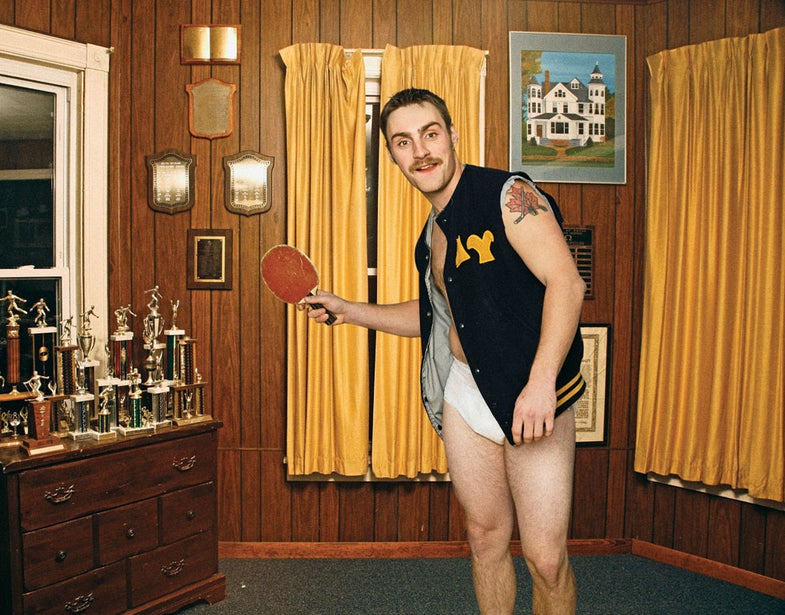 For many American university students and graduates, Greek life is an almost inescapable part of the campus experience. But for a European like commercial photographer Philip Habib, raised in Milan and now living in upstate New York, it was largely unfamiliar outside of a John Belushi movie.

That changed in 2007, when his son enrolled in Clarkson University in Potsdam, New York, and joined Delta Upsilon. “He called me one day and said, ‘Dad, I think you should come down here with your camera,’” Habib explains. Visiting the campus, he was fascinated by the seeming lack of discipline and, most of all, by the strange juxtaposition of the formal and informal—rooms lined with trophies and littered with beer cans.

On his first shoot at Delta Upsilon, Habib captured the party by creating one. He brought in a few kegs, put on some music and let the frat boys go wild. “I had one guy literally strip,” he says. The brother pictured here was his favorite. “Jon is the fraternity VP, and he had this diaper that he called his ‘party dress,’” Habib says. “He walked right down in the diaper and started playing ping-pong in it. I’ve never seen anything like that.”

This first shoot led to an ongoing series, The Future of America, which encompasses both fraternities and sororities. With a few differences—sorority sisters prefer daiquiris, for example—the photographer has discovered that the chaos is the same. Photos from the series will be on view in a group show at Scollay Square Gallery, Boston City Hall, October 22 through November 30 (see more at philiphabib.com).

“What interests me most,” Habib says, “is that some of the top leaders in this country—presidents, CEOs—come from fraternities. This lack of inhibition is an integral moment in those lives.” Seeing it, he adds, “makes it easier to imagine public figures in their underwear.”