Most successful photographers are better known for the images they create than for what they look like. Even their names... 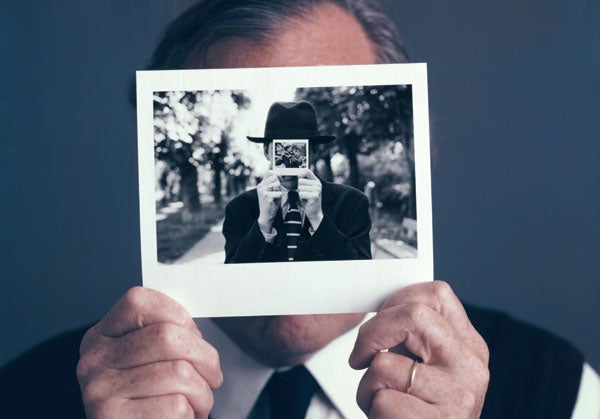 Most successful photographers are better known for the images they create than for what they look like. Even their names tend not to show up very big. “The credit a photographer gets is usually six-point font in the gutter of a magazine,” says commercial photographer Tim Mantoani.

Five years ago Mantoani began a project designed to pay tribute to the faces behind great pictures. Using the massive Polaroid 20×24-inch format, he portrays each photographer holding his or her favorite image, underscored by a hand-written inscription, creating a layered, three-part narrative in each portrait.

The project began as a keepsake of Mantoani’s friendship with music shooter Jim Marshall, who posed holding his image of Johnny Cash flipping off the camera during a sound check at San Quentin. That memento sparked the idea for a full-blown project that snowballed as Mantoani sought out other creators of images that inspired him to take up photography. “I wanted to show that these photographers are real people,” he says. “Most of them were just doing their job. They didn’t realize that their work would have the significance it has today.”

Mantoani usually allowed his subjects to choose which photographs to feature, collaborating with them to reveal personalities who aren’t typically in front of the camera. Lois Greenfield, known for her study of motion, came to the studio with a stack of square photos and threw them in the air; William Wegman brought a life-size cut-out of his dog Bobbin. Street photographer Fred Gurner chose an image of the reclusive Diane Arbus that features her Mamiya C33; Daniel Kramer posed with his cover shot for Bob Dylan’s Bringing It All Back Home. Once Mantoani started accepting referrals for subjects, he ended up with a Who’s Who list that included Neil Leifer, Mary Ellen Mark, Elliot Erwitt, Douglas Kirkland, Bob Gruen and Steve McCurry.

There was no shortage of logistical challenges, many of which stemmed from Mantoani’s use of Polaroid 20×24, one of the more esoteric film formats. Of the six massive cameras that shoot it, only three are in the United States, and the film they take was discontinued in 2008.

Still, New York–based 20×24 Studio arranged to obtain adequate film inventory and production equipment to facilitate Mantoani’s project, allowing him to make enough pictures for a book—Behind Photographs: Archiving Photographic Legends (Channel Photographics, $60)—which features portraits of 158 photographers. Still, at a cost of nearly $200 per exposure plus camera rental, the book could only have been done as a labor of love. Partially self-published, it includes a varnish coat on the pictures to make them look and feel like Polaroid prints.

Because of the intellectual property featured in these images, Mantoani does not intend to sell the prints, although he hopes that one day they will end up in a museum collection as an archive of some of the great photographers of our time. “I hope future generations will be able to not just appreciate famous images,” Mantoani says, “but the photographers as well.”