This is How Catherine Opie Thinks About Making Portraits

The artist on the importance of asking questions 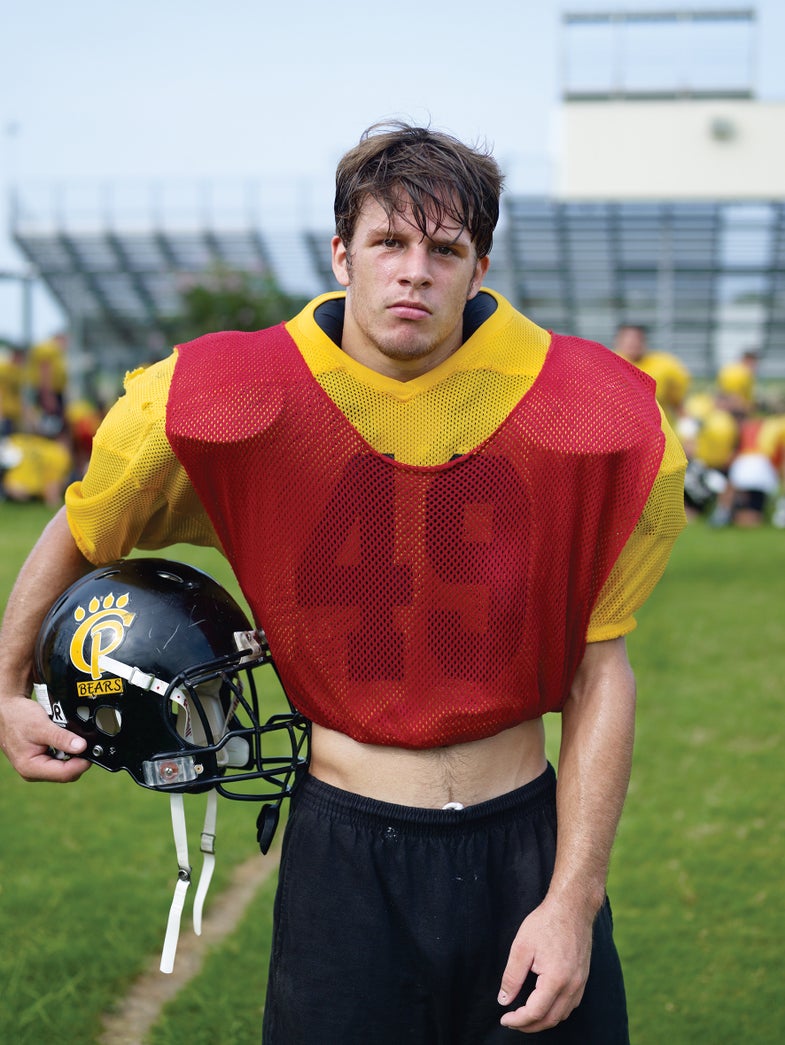 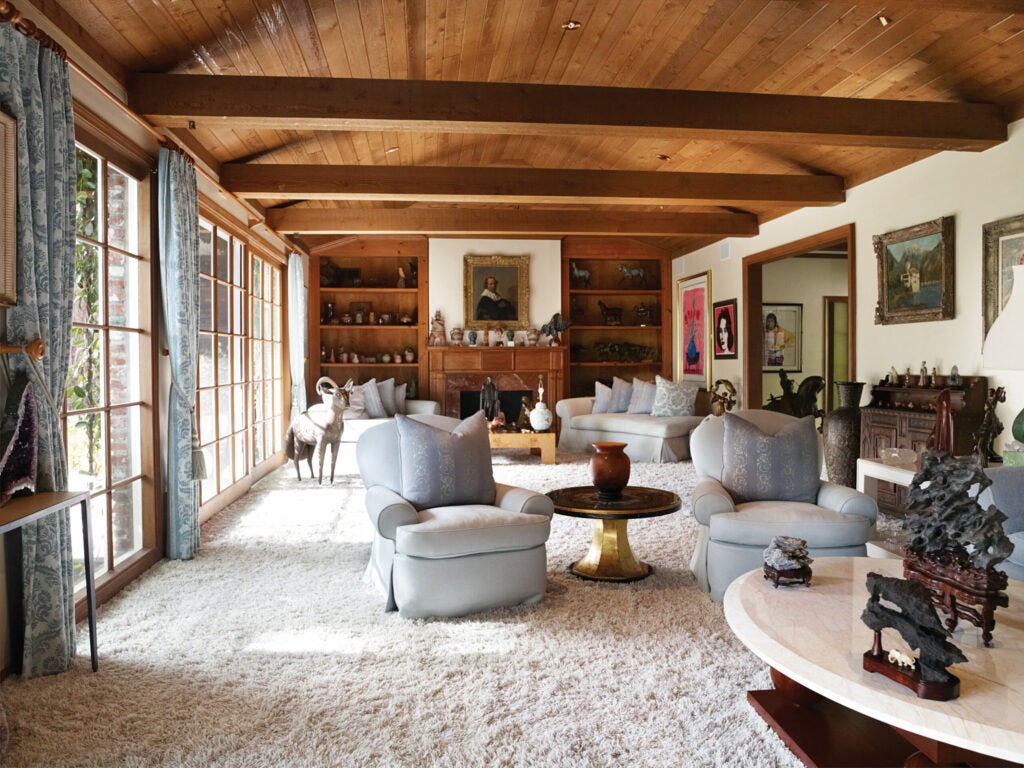 An ordinary kitchen in a ranch-style home, light diffusing through a window and reflecting off the mirrors over scuff-marked, aging wallpaper. A note to self in red lipstick on a mirror. The contents of a closet, half a dozen or so items at a time: dresses, shoes, gowns, furs. The golden statuettes. Photos of friends and family on practically every surface. A pile of red AIDS ribbons. A diamond and emerald necklace dissolving into the sun. 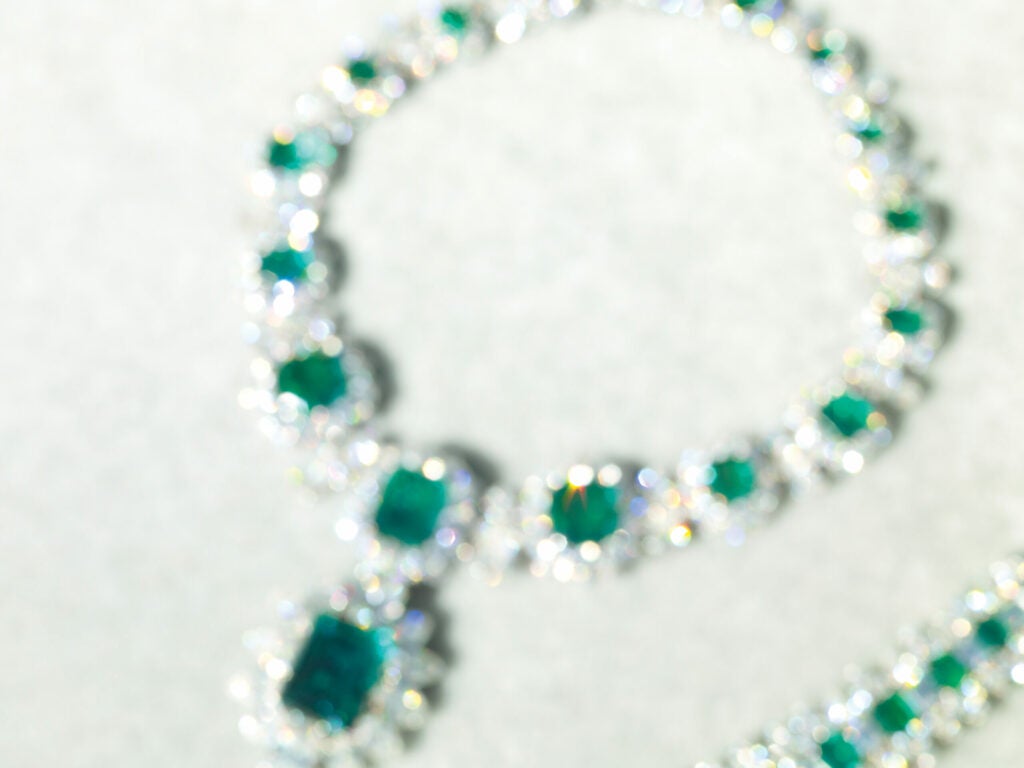 Zooming in on the objects of a life, from reflections of an inimitably public image to the mundane, Catherine Opie constructed a portrait of Elizabeth Taylor without ever meeting the legendary actor in person. For the project that ultimately became 700 Nimes Road, the photographer was granted access to Taylor’s Bel-Air home in 2011 after their mutual accountant made the connection—and although Opie never intended to photograph the star, the project shifted gears on March 23, 2011, when Taylor died of congestive heart failure. The resulting series gave Opie time to explore one of many questions that have motivated her to make photographs over a celebrated career: What is a portrait, really? 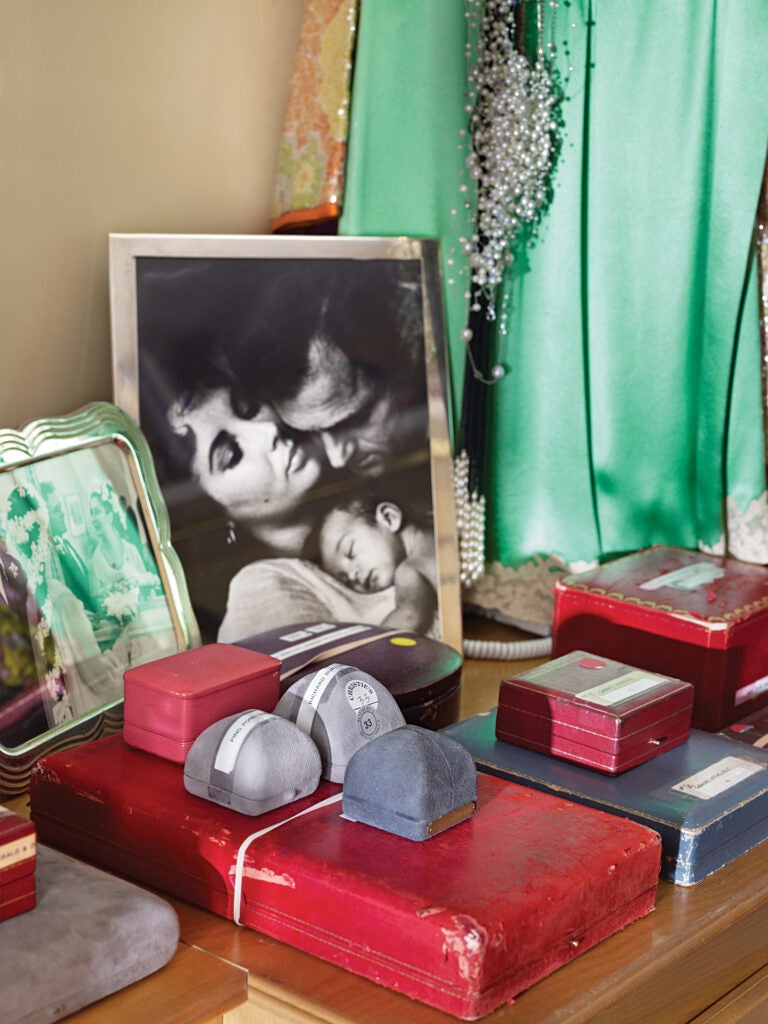 “It’s trying to extend the definition of how we begin to define what a portrait is,” says Opie, the fine-art photographer whose rigorous explorations of portraiture and landscape have produced some of the most lauded images of the past 25 years. “Somebody as iconic as Elizabeth Taylor—we know exactly what she looks like. So through the still lifes, my question was … does it give us even more information about [her] than just having her sit for me for a portrait?”

If Opie is about anything, she is about asking questions. From American Cities to Freeways to her most recent portraits, the photographer has been especially interested in asking questions about American culture and its politics. Her aim, she says, is to “really use my lifetime, my ideas, and questions that I put forth to the world…to try to make bodies of work in relationship to that.” Opie has set her prolific and technically exacting work on tableaux such as Tea Party rallies, President Barack Obama’s first inauguration, high school football, San Francisco’s bondage community and natural and human-made landscapes such as the Los Angeles freeways and Yosemite National Park. Each image peers into its subject and points to the context in which it sits. 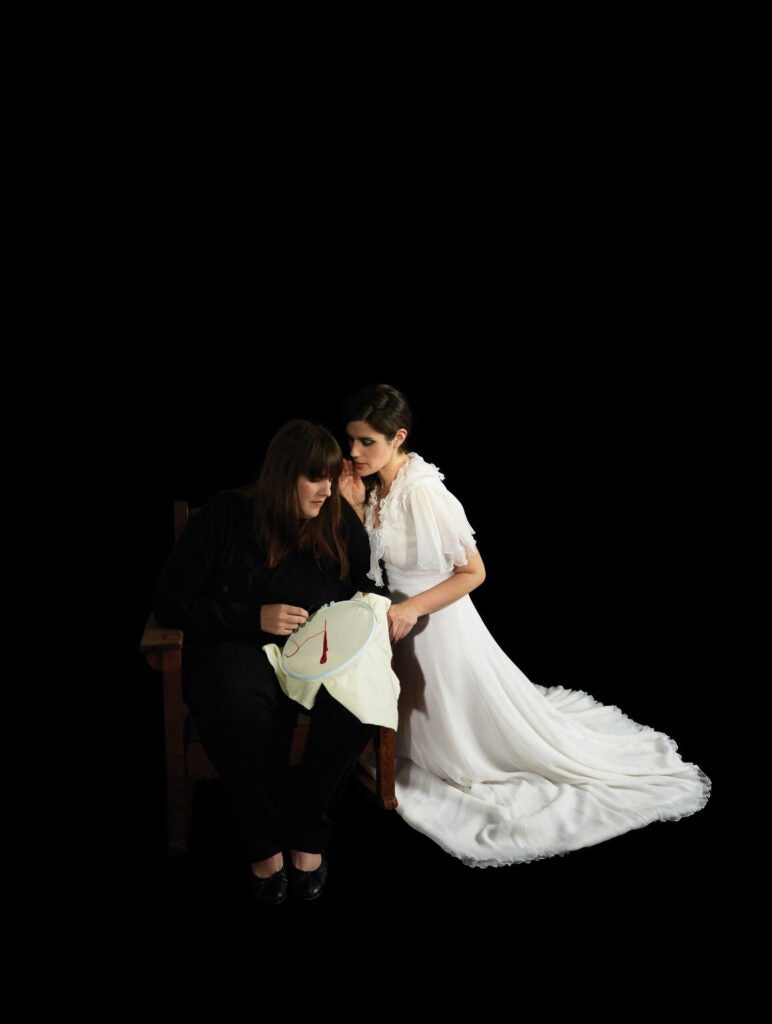 As William Eggleston did with his still lifes of Elvis Presley’s Graceland in 1984, at Taylor’s home Opie constructed a similar mosaic and she takes care to point out that by fitting disparate images together, we get to know the person, not her stuff. “It’s the simple idea of what bearing witness does,” Opie says. “You bear witness to a home. You construct something in relationship.”

For Opie, those relationships extend not only into Taylor’s own life and our cultural history in relation to her, but into the whole history of portraiture. Start with her photo of Andy Warhol’s portrait of Taylor. “It’s about me the artist looking at Elizabeth, but also there’s a relationship to artists or history having a look at Elizabeth,” Opie says. “There’s a kind of layering…that begins to create or designate the notion of portraiture for me.”

Peel back more layers of relationship—between artist and subject, art and audience, artist and history—and the audience is pulled into a conversation with artists who came centuries ago. In a recent series of portraits Opie’s friends and associates sit in poses reminiscent of Renaissance portraits: emerging from an inky background, their faces more illuminated than lit. Idexa kneels inside the frame gazing into the distance, allowing us to gaze back at her elaborately tattooed body. Author Jonathan Franzen sits with his back to the camera, inviting us to read over his shoulder. The chiaroscuro-style portraits have a strong relationship to painting, especially to the portraits of Old Masters such as Hans Holbein, Rembrandt and Caravaggio. Opie looks at that relationship both conceptually and technically. 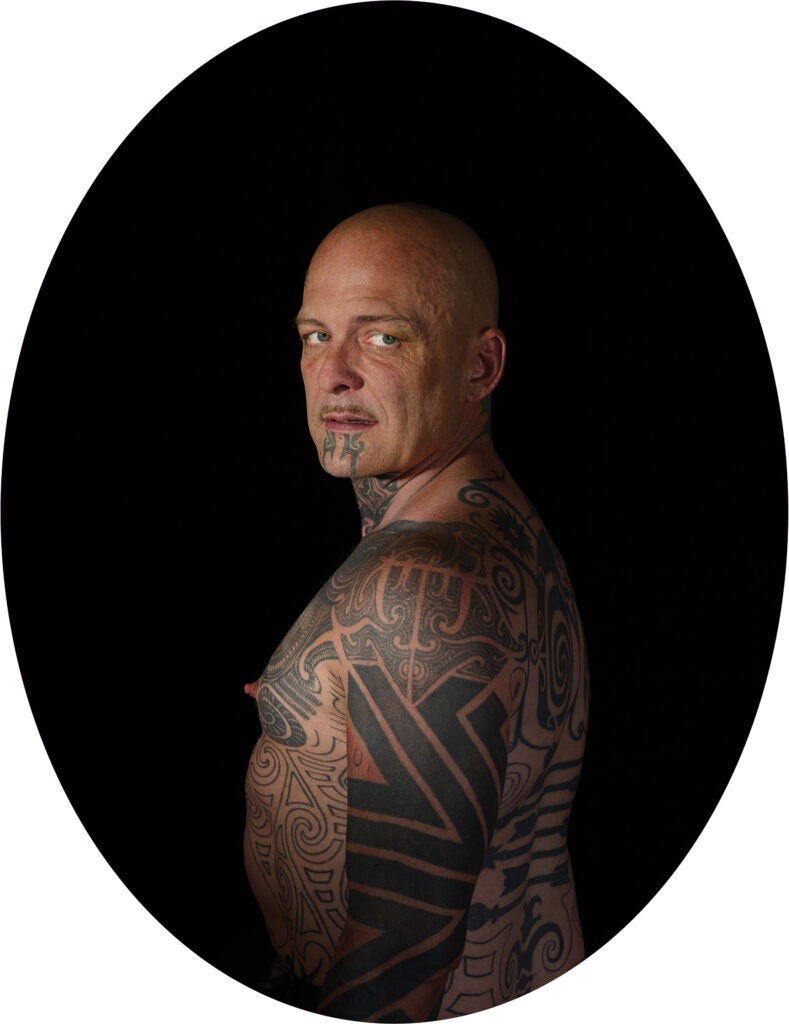 “The question that I’m asking…now [involves] lighting and the way one would think about Renaissance lighting,” Opie explains. “Are we able to hold the person longer, to think about portraiture vis-à-vis the fact that social media has taken over in relationship to the selfie? By using an older trope, do I have people actually standing before the work longer?”

To achieve that seductive effect, Opie uses ProPhoto lights with a fresnel over the strobe. (She shoots with a Hasselblad H2 and Phase One Q180 back.) “Then I’m able to control the light on the subject,” she says. “None of the light manipulation has happened post-production; it’s all done at the time of photographing. So I’m treating digital, for the most part, still as a platform, like I would treat a negative.” 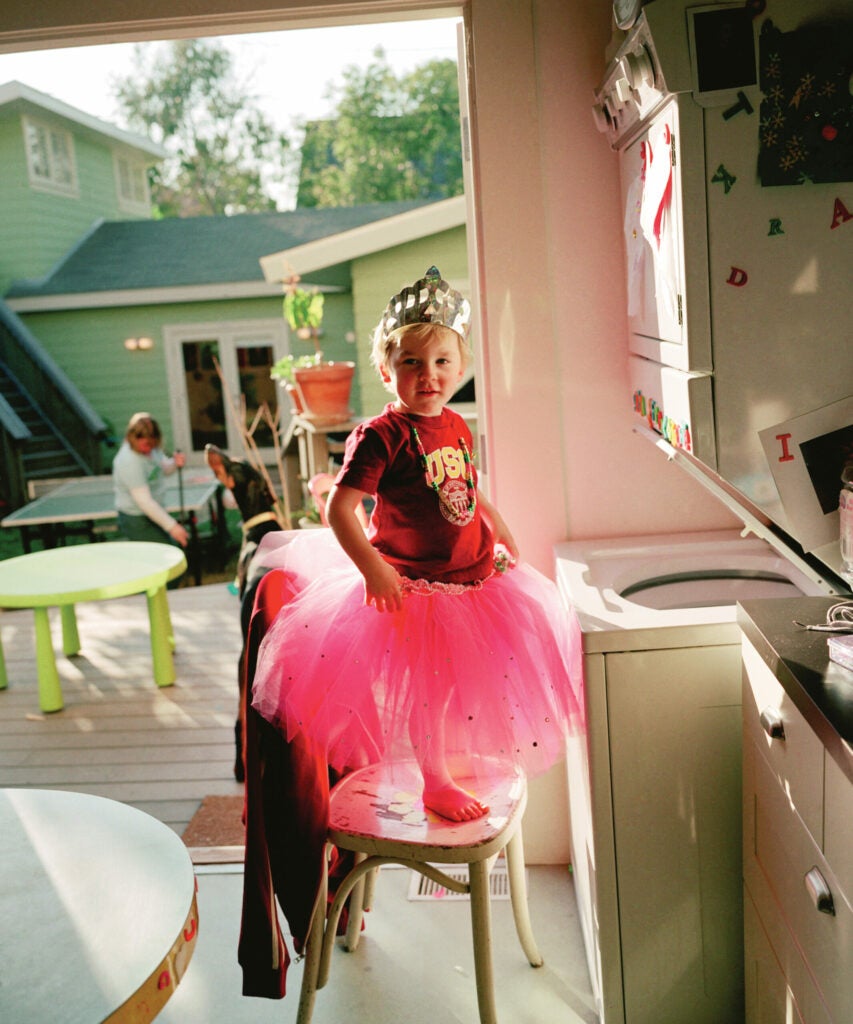 Oliver in a Tutu

In the Portraits and Landscapes Opie’s landscapes sit like space bars amid the portraits’ rich allegorical text. They preluded a six-story mural of Yosemite Falls that was installed in May at the new L.A. federal courthouse. These images, too, invite pause. They stop the viewer as the brain tries to decipher the details. Then the gaze softens, as if staring long enough might make the image drift into focus.

More questions. “How do we keep people looking at images?” Opie asks. “Why are images still important in this completely saturated image space, a culture that has been created through social media?” 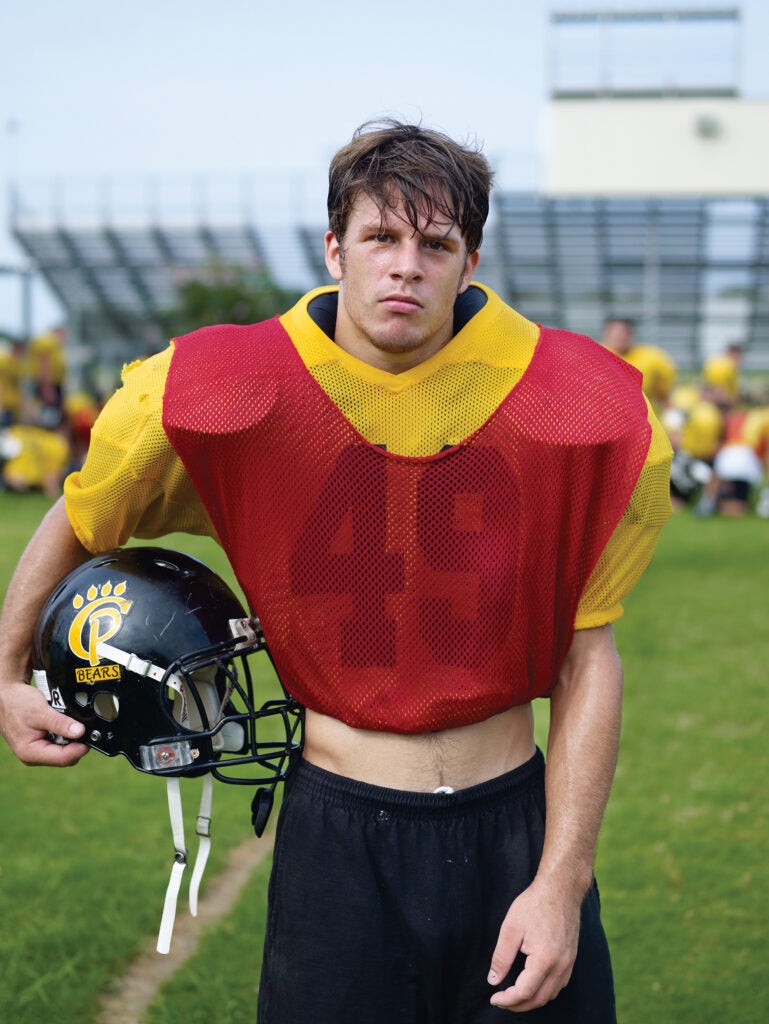 As UCLA faculty, Opie advises artists to follow their passion, understand their work in context and to ask questions. “That’s the cool thing about being an artist, right? You get to ask a lot of questions and try to figure them out by making work,” she says. “Be passionate, and where passion alone doesn’t answer everything, allow complexities to come in within your work [that] allow you to understand, really, the language that you’re working with.

“And don’t stop,” she continues. “That’s the beauty of being able to express, of knowing one’s medium and history of art in depth—to really explore the complexities of ideas of representation. I never run out of questions, and that’s really  a nice thing.”