That’s No Tree, It’s a Tower

Last year, we wrote about Altered Landscapes, a book of landscape photographs which show the effect of humans on the... 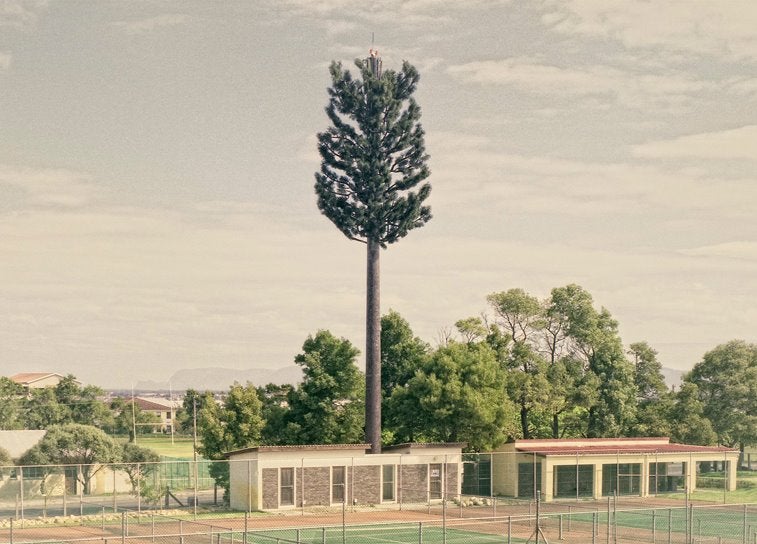 Last year, we wrote about Altered Landscapes, a book of landscape photographs which show the effect of humans on the environment. Dillon Marsh, a South African photographer, has produced a number of photographs which could have easily appeared in this book. While some of the photographs in Altered Landscapes, though, were quite direct in showing the sometimes detrimental effect of human activity, Marsh’s photographs are subtler. In his works “Means to an End,” “Invasive Species” and “Assimilation,” Marsh has created a small study of power lines and towers around the Cape Town area. Taken as a whole, it’s clear that he’s developed an eye for how to frame up these objects.

“Means to an End” is probably the most straightforward of the three series, in that there’s little explanation required to understand what’s happening in the photographs: they show power lines running through the landscape. “Invasive Species,” though, is a little harder to grasp at first. The odd structures that it documents are all cell phone towers, which have been disguised as trees. There’s plenty of information about them here, and Marsh says that “most people don’t pay too much attention to them these days, although they don’t really achieve the desired result of hiding the presence of the towers. People seem to view them as a curiosity.” Marsh’s series “Assimilation” brings us closer to the natural world: it’s a catalog of nests that Sociable Weaver Birds have created in telephone poles.

Marsh says that he often photographs in the areas lying outside of the center of Cape Town, a city whose size is restricted by geographical features. Once he’s identified a subject, he’ll research shooting locations through a combination of Google Street View, and good old-fashioned random driving. Marsh says: “I find the relationship between nature and man-made structures fascinating.” The result of this interest has been a group of photos which is, on the one hand, pleasant to look at–thanks especially to Marsh’s control of the color palette–while also revealing something about modern landscapes.