Wrapping your head around “A Living Man Declared Dead and Other Chapters I-XVIII”—the latest series by photographer Taryn Simon, currently... 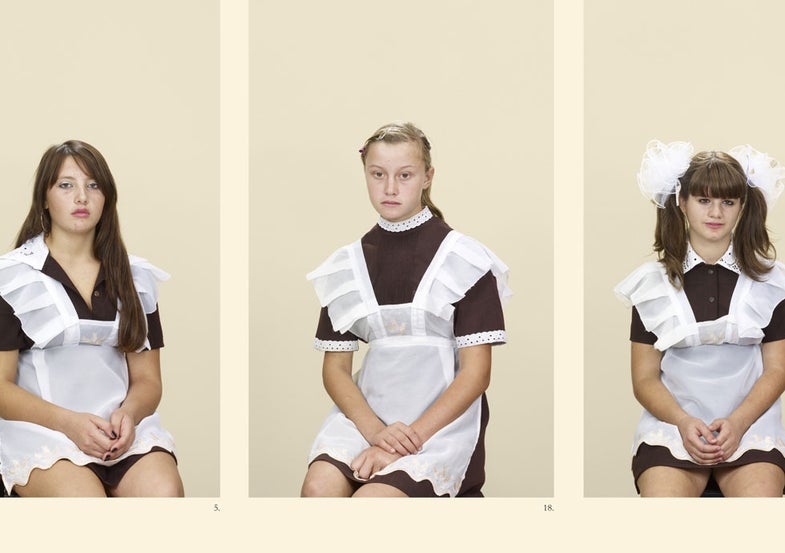 Wrapping your head around “A Living Man Declared Dead and Other Chapters I-XVIII”—the latest series by photographer Taryn Simon, currently on view at MoMA in New York—is not easy.

Simon, whose past documentary work has included a series on wrongly convicted prisoners (“The Innocents”) and another on items detained at U.S. customs and post offices (“Contraband”), is fascinated by the concept of bloodlines. For this project, she spent four years traveling the world, researching, cataloguing, fact-checking, determining an order for, and finally photographing the ascendants and descendants of eighteen individuals and their family trees. She categorized her findings into 18 “chapters,” with each corresponding to a single bloodline. They’re displayed as a panel that includes a grid of portraits of the “family,” a written statement about the bloodline’s significance, and supporting photographs acting as narrative elements to the stories she came across in her research. Each includes a numbered key with biographical information about each subject who sat for her.

Though the panels and their corresponding keys have the appearance of pages from a textbook that have been articulated as austere illustrations of the traditional family tree, at the core they’re acts of passionate, exhaustive journalistic storytelling. Some of the image descriptions have blank slots–where portraits should have been and do not exist because of political fears, emergencies or the unknown whereabouts of individuals. There are portraits with names withheld and birth dates unknown. And there are individuals who confidently sit for the camera even though they are descendants of a war criminal or one of nine wives in a polygamous family. Everything, even the conspicuous empty spaces, merges into a detailed story. 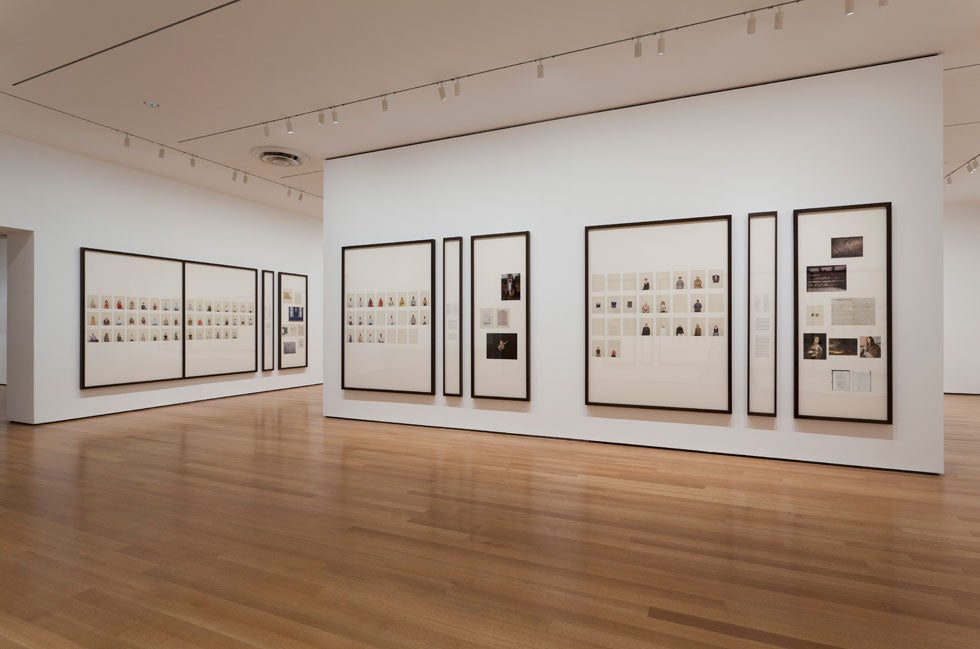 In the process of researching and photographing the distinct bloodlines, Simon also raises universal questions about fate, heredity, it what it means to exist in this world, even if your government declares you dead. In Chapter I of the project, from which the title of the series is derived, she references a man and three of his living family members in India who do not exist on paper. They are listed as legally dead in the local registry to deny them any hereditary transfer of land, according to the artist.

Chapter II follows the migrations of the descendants of an individual who was sent by the World Zionist Organization in 1907 to investigate the potential for Jewish settlements to be established in Palestine.

We see the importance of bloodlines and their effect on animals, too. One chapter documents an invasive bloodline of rabbits in Australia, originally brought from Europe, that grew from 24 to half a billion in 100 years. The chapter considers a larger issue at stake: the government’s introduction of a deadly disease to the rabbit population to control its numbers.

But blood doesn’t always drive the chapters. As we see, it loses its absolute reliability in some instances.

There’s her chapter on China (Chapter XV), the only performative chapter and the only fabricated bloodline in the exhibition. For this bloodline, Simon was told who and what she could photograph by the State Council Information Office of China. They decided who would represent a “typical” multi-generational Chinese family. They didn’t tell her why they chose the specific individuals and she has no way of knowing if the individuals are even related by blood.

And in the chapter dealing with displaced children (XVII), the lack of a clear bloodline is the defining factor. Here, Simon made photographs in Ukrainian orphanages, which are often just a temporary holdover before the children are released and immediately “targeted for human trafficking, prostitution, and child pornography,” says Simon’s artist statement. The images show children dressed in clothing that is surprisingly nice for having been donated; some of the women choose to dress provocatively.

What drove the artist to the idea of documenting bloodlines? “In my past works I have always catalogued things”, Simon explains (see: “Contraband”). “I give them the appearance of being an index or something comprehensive, but it’s actually a more abstract mess that’s given the appearance of order. And I started thinking, what is an order, an absolute order that I cannot curate or edit?”

Today, Simon notes, bloodlines are no longer reliable proof of heredity or identity: some individuals now have genetic matches to others across the world that they share no bloodline with; some are born into artificial wombs. Rather, her exploration goes beyond the traditional archive and into areas that cannot be ordered and defined. “The result isn’t an equation for me,” she says. “It’s about the gaps between each piece where that murky, difficult territory exists that I certainly cannot label.”

In typical Simon fashion (see: “The Innocents”), her subjects rarely smile at the camera. They are not styled. But it is this deliberate distance she creates that is paramount to the success of the series. “I prefer to create an almost frustrating engagement for the audience by steering clear of emotional triggers and the ways in which our viewing habits are guided by those triggers in looking at complex stories,” she explains.

What is exciting about this work is its success at bridging genres in photography: the process-oriented series is part documentary and part photojournalism, but conceptualized in such a way that it can be viewed as fine art.

The importance of this exhibition may be in the disorientation it creates for the viewer, and its resistance to becoming part of the instantaneous visual vocabulary we consume almost subconciously in our image-saturated culture. Simon beckons us to go beyond the superficial aesthetic of imagery to see new truths, and in their midst, to ponder our own existence. If we can look beyond the headshot to enter a dialogue about our origins and our place on this earth, we may have derived a concrete understanding of this exhibition.

Nine chapters from “A Living Man Declared Dead and Other Chapters I-XVIII” are on view at the Museum of Modern Art in New York City through September 3. This is the first presentation of the series in the United States, after exhibitions of the series in its entirety at the Tate Modern in London and Neue Nationalgalerie in Berlin.